Can't a girl just meet a nice guy, enjoy a dinner date, and not be attacked on the way home? The answer for Julie is, not today.

It was going so well until the check came.

Julie would almost say she liked Sam when he made his way to her through the bar, which was crowded for a Wednesday night. She clutched the stem of her wineglass for fortitude as she watched him approach. He looked like his profile pic on the dating website she’d used: tall, slender, fussily combed black hair. Not smoking hot, but when you were a nobody looking for love in the big city, adequate would have to do, and he was.

He paused a short distance from the bar and glanced up and down. His eyes eventually fixed on her. “Julie? Julie Meadows?”

“That’s me.” Julia slipped off the bar stool and extended a hand.

“Don’t get up.” He gripped her outstretched hand and, instead of shaking it, gave it a strange little nod as though he wanted to kiss it. “I’m Sam.”

“That’s okay. I was hoping we’d get straight to dinner.” He smiled.

Well, why offer to meet me at a bar, then? Julie pushed the testy thought aside and ensured her chirpy smile stayed in place. “Okay! Sounds good. Where did you want to go?”

“How about La Rose Dansante?”

Julie almost choked on a sip of her wine. She set it down slowly, eyeing Sam. “You like seafood?”

“It has the best lobster thermidor in the city.” He smiled, and two adorable dimples appeared on his cheeks.

Those dimples. They made Julie want to forget that, while she might like lobster thermidor as much as anyone, her budget would argue ramen noodles were more her speed.

In that case, Julie wasn’t in a position to give up free food. She grinned. “Sounds good to me.”

He extended a gallant arm to her as though it was the nineteenth century, and Julie permitted herself a small giggle as she threaded her arm through his and allowed herself to be escorted across the bar. She liked the feeling of Sam’s sleeve under her fingers. His suit was well-cut, and the fabric had a rich, expensive thickness.

When they stepped into the warm summer night, a constellation of city lights above their heads, Sam’s car was waiting by the curb. It was a sleek, low thing, purring with speed even when it wasn’t moving. Sam led her to the passenger side and opened the door.

He gave her another dimply smile. “Just being a gentleman.”

It did seem like he was a gentleman. He played quiet classical music on the drive to La Rose Dansante and talked about travel and the weather. When they reached the restaurant—complete with red carpets, crystal chandeliers, and free breadsticks—Sam held the door and pulled out her chair. Julie did her best to play the part of the elegant little date, too. The conversation flowed (as did the wine), the lobster thermidor was excellent as far as she could tell, and everything seemed boring but fine.

Until Julie stared at Sam across the table with the check lying between them.

“Excuse me?” she managed in a strangled whisper.

“I said, should I ask him to bring a card machine?” Sam raised an eyebrow at her. “I’ve got cash for my half.”

She gaped from him to the check and back. Then the total at the bottom, a sum so large the lobster thermidor in her stomach threatened to reappear.

“You don’t mind splitting the check, do you?” Sam prompted.

“I…guess I don’t.” Not usually, but if she’d known they’d split the check, she would never have agreed to come here.

“Great.” Sam grinned. “I’m all for people paying their way. So, cash or card?”

“Card,” croaked Julie, who hadn’t carried that much cash since she left home. Ugh, home. Mom was going to have a field day when she learned about this.

Dry-mouthed, she unlocked her phone under the table and checked if she had enough money in her account to cover half of the bill. The digits glowing cheerfully on the screen would be just enough.

The waiter accepted their payments, and Sam offered her his arm to lead her from the warm restaurant with a now-queasy bellyful of lobster. “So…” he began as they stepped outside. “Would you, uh, like to head to my place?”

Julie stared up at him. Was he being a jerk by making me think he’d pick up the bill, or was that just me failing to understand people, as usual? She couldn’t decide. “Uh, not tonight.”

“Okay.” Sam shoved his hands into the pockets of his nice suit and shifted his weight. “Well, are you free on Friday?”

“Actually…” Julie sighed. “I had fun and everything, but I don’t think there will be a second date.”

He flinched, then shrugged. “Okay. Thanks anyway.”

“Thanks,” Julie managed and watched him stride toward his car without offering her a ride home. Another tick in the “jerk” column, I guess.

She pulled out her phone and opened her navigation app. She was seven blocks from home. She didn’t have the budget left for an Uber after The Dancing Rose had taken its pound of flesh. Nothing like a long, lonely walk home through Brooklyn in the dark after a disastrous date.

Stuffing her hands into her coat pockets against the early-spring chill, Julie hunched her shoulders and headed downtown, her boots ringing on the pavement. Why do I have to be so bad at people? Things would be so much easier if she could read them better.

As she traipsed along, the restaurants, car showrooms, and upmarket malls around her gave way to seedy tenant buildings and smoky little bodegas. Graffiti splashed the walls, loud and colorful and profane. The knots in Julie’s shoulders unraveled a little. Still, she glanced down dark doorways as she passed them and tugged at the short skirt of her one-and-only decent dress to cover a little more skin.

That didn’t stop a scruffy figure leaning against the wall outside a gas station from wolf-whistling as she passed. She ignored him and continued briskly to the overpass ahead that marked the corner of her home block, but she slipped one hand into the inside pocket of her coat and closed it over the little bottle she’d hidden there.

“Hey, sexy!” the man called again from behind her. “Where you goin’ in such a hurry?”

Julie forced herself not to quicken her step, but she quietly uncapped the bottle in her pocket.

“Hold up a minute.” The man’s footsteps were loud behind her. “I just wanna talk to you.”

She was just a few yards from the overpass, and a huge figure detached from the bottom of the bridge and stepped out in front of her.

“Hey,” growled the massive man. “My friend here wants to talk to you.”

Julie stopped. Well, crap. She swallowed. “I’m not in the mood for talking.”

“I can think of something else we could do,” said the person behind her.

Julie turned. The scruffy man wore a loose-lipped leer. There was a fruity stench to his breath, and as he stared at her, he scratched at one scabby arm.

“You don’t want to do this.” She tried to keep the quaver from her voice.

“You’ll regret it,” Julie snapped. She clenched her fist over the bottle. “Lay a finger on me, and you’ll both be sorry.”

The big man laughed and stepped nearer and Julie whipped around, ripping the bottle from her pocket. “Don’t make me use this!” she screamed.

He stopped, blinking at the bottle in the faint glow of a grubby streetlight. “Uh, Scents of Paradise Room Spray, with notes of orchid and macadamia?”

Julie rolled her eyes. “It’s the only bottle I had, okay? But that’s not what’s in it.” She stepped closer and jabbed him. “This bottle contains alcohol, vegetable oil, and powdered Carolina Reaper, the hottest pepper in the world.” She rested a finger on the trigger. “One spritz of this will make police tear gas seem like a spa day.”

The man’s eyes widened, and he stepped back. “You think I haven’t been pepper-sprayed before?”

“Get it together, Pete,” barked the ratty man. Julie heard feet shuffling behind her and spun. She backed away in time to avoid being grabbed. The scruffy man sneered. “In case you hadn’t noticed, sweetheart, I ain’t had many spa days recently. I think I can handle your little concoction.”

“Seriously. She’s gonna get us into trouble,” yelped Pete.

“You bet I am!” Julie snapped.

Greg glanced from the bottle to her and back. Then he stepped away, laughing. “I’m just messin’ with ya. Go on, then.”

Julie gave him a last glare and backed away, keeping the spray bottle in her hand. Pete watched with apprehension.

Julie spun on her heel, resisting the urge to run with all the willpower she could muster, and strode away. She waited until she was safely around the corner and out of sight, then she carefully replaced the cap on the bottle, returned it to her pocket, leaned against a wall, covered her face with her hands, and allowed herself thirty seconds of freaking out.

“Crap, that was close,” she breathed, her heart hammering. Her hands shook against her face. “That was so freaking close.”

She tipped her head against the wall and stared at the skyline, its bright windows glimmering in the place of stars veiled by smog or clouds. What a night.

It was a good thing those two goons hadn’t made her use the spray. They had no idea she hadn’t figured out how to get more of the spray onto her target than herself.

She pushed off the wall and walked home, keeping one hand on the little bottle in her pocket.

Julie handled that situation pretty well, especially after having to pay half of a ridiculously expensive dinner. There might be more to Julie than just a single girl in the city. Find out on November 7th when Para-Military Recruiter Book 1: Drafted is released. Head over to Amazon and pre-order it today. 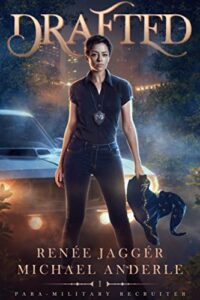