Ben “Coop” Cooper is a washed-up, blacklisted, former movie star who is out of hope with no other options.

Ben “Coop” Cooper squinted through the cloud of sand and dirt at the target. This latest explosion, the third in as many minutes, had been uncomfortably close. The heat and the screaming were getting to him. Worse, his right knee throbbed painfully, but he’d stick it out as long as it took. He was a professional, and sometimes professionals suffered. “Embrace the suck,” the grunts said. He repeated the phrase like a mantra as automatic weapons opened up behind him.

Coop locked his gaze on the hulking form of the alien war machine. It shimmered in the desert heat as the erupting flames blurred its shape. The mechanical monstrosity lumbered forward on legs as big around as redwood trees. Its steps shook the earth, and Cooper felt as much as heard them. The weapons fire was as faint as wind chimes by comparison.

He knew the moment was coming. His experience gave him a feel for the critical moment when battle would be joined and heroes would be born.

The shouted command arrived, carried above the din. “CHARGE!”

Cooper moved before the clamor of battle swallowed the word. He used the butt of his rifle for leverage and ignored the flash of pain in his right knee as he surged forward. Sweat poured down his face and soaked his green uniform. None of that mattered since the end of this mess was in sight. His moment had arrived.

Amid the screaming and shouting, Coop surveyed the men around him. They were too young. They’d been waiting for this climactic battle, tired and ready to put this nightmare behind them. He shared that feeling. As a veteran of jobs like this, it was his responsibility to lead them to glory. Cooper would show them how things got done and how to embrace the suck.

He glared at the menacing robot. With a snarl worthy of John Wayne, Cooper waved his young comrades on. He held his rifle in one hand and windmilled his other arm as he yelled, “Come on, you sons of bitches—”

“Cut! Cut!” came over the loudspeaker. “Ben Cooper, what the hell are you doing?”

Heat rose in Coop’s face. Embarrassment hit him, and he stopped moving. The young actors stared at him. They were mostly Australian because apparently, American actors couldn’t get roles in action movies anymore. Some of them smirked, and a few had the balls to look concerned for him. Beyond the actors, the rest of the team was already making preparations to reshoot the scene. They were professionals—like Coop was supposed to be.

“What the hell are you looking at?” he snarled at the nearest young pup. The extras turned their backs, desperate to put distance between them and the veteran actor. He knew they weren’t the problem. So did Denny, the movie’s director. He was marching toward Coop.

Denny Goldfarb wasn’t much to look at. He was a nondescript human being you’d pass on the street without a second glance. However, when he was pissed off, he commanded attention. Denny was barreling toward Ben Cooper like a screaming fire engine hurtling through traffic. His pasty, stumpy legs pumped faster than Cooper had ever seen him move. His designer sandals churned up a cloud of dust. Sweat had soaked through his silk shirt, and his bald head had turned red in the blazing heat of the Arizona desert where they were filming.

Denny’s lips moved, though Coop couldn’t understand what he was muttering. Given that Denny’s arms were flailing like an angry Muppet’s, it wasn’t a string of compliments. Coop took a deep breath and straightened as his old friend drew close. He sorted through his inventory of well-rehearsed smiles and selected a combination of sheepish and apologetic that had served him well in the past.

“Look, Denny, I’m sorry.” Coop held his hands away from his body palms outward in a near-universal bit of calming body language.

Denny stopped well beyond arms’ reach and looked at Coop through the ridiculous orange plastic convenience-store sunglasses he’d insisted on wearing since they’d arrived in Arizona.

That wasn’t the opening line Coop had hoped for, but he’d dealt with worse. He and Denny went way back. They’d shot Operation Golden Rain together, one of the best war movies ever released. In the film industry, loyalty mattered. He and Denny had history coming out of their ears, going back decades before Coop had been blackballed and his career had gone from Oscar-worthy to the shitcan overnight. Hell, Coop had died in four of the top-grossing action films of all time. He had been a star once upon a time.

Denny’s arms finally stopped, and he looked…weary. Coop imagined taking him out for a drink at the end of the day’s shooting to help him relax. They had that kind of history. It was what friends did.

So much for history.

Coop choked and let the smile fall. This couldn’t be happening. He’d improvised a little. So what? He’d done it a thousand times over the years. It was his method. Denny knew that.

“Denny, you can’t be serious,” he began, but the diminutive director started waving his hands again.

“No, Ben. Just…no. I gave you this part because I knew you needed the work, even when everyone said not to. I tried to help you, but this was big. You're an extra, not the lead. You don't have any lines. You're not starring in any scenes. Do you know how much this take cost to put together? Do you have any idea how much those simunitions cost? Shit! I don’t even want to think about it. The showrunners are gonna be harping on my ass all night.”

Coop was too stunned to say anything. He’d really messed up this time. He knew his flaws and his weaknesses, but he’d always managed to skate by on his talent, charm, and good looks. Mostly. Those days had passed. His vision swam and the arthritis in his knee flared up, making it hard to stand. There might still be a way out of this. He trusted the instincts he’d honed over decades of film work and adopted a look of despair. His body language screamed dejection. Denny looked at him sadly, and Coop allowed himself to believe it had been enough; the director had a change of heart.

“Just go pack your stuff, man. One of the assistants will make your plane reservations.” Denny turned his back and walked away, hollering for the crew to set up the shot again.

It looks like this is really the end for Coop. What's next for this washed-up movie star who just blew his last shot? Find out on July 21, when Adrenaline Rush Book 1: Fight or Flight is released. In the meantime head over to Amazon and pre-order today. 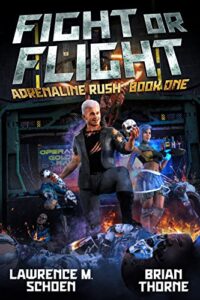