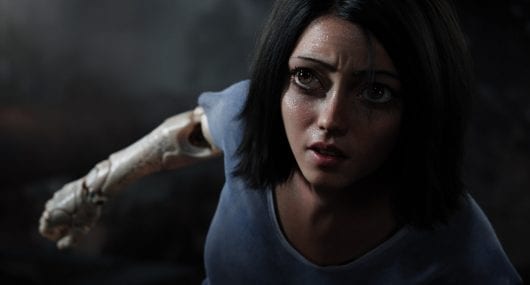 Based on the 90’s manga Gunnm, published as Battle Angel Alita in English translations, Robert Rodriguez's cyberpunk adaption just dropped, nearly three decades after the comic run had ended. I could not think about another perfect example of spectacle filmmaking, and though it is beautiful with amazing special effects and is genuinely a fun two hours of movie, not much lies beneath the surface. Alita is a fun and enjoyable movie, to be sure, but it is in no way a good film.

The film, itself, is gorgeous. The effects, for the most part, are world class. The Earth of Alita is gritty but still beautiful, and where the characters and their various cybernetic enhancements meet look nearly seamless. But, like so much of this movie, where it comes to the main character herself, Alita, played by Rosa Salazar, the effect is too much. She, unlike the rest of the cast, has an uncanny valley effect put on her. Her eyes are too big, hair doesn’t fall correctly, and her skin seems to be lit in a different amount of light as the rest of the world around her. We find out why she looks different from the rest of the cast as the film goes on, but it doesn’t help how unsettling it is to watch her.

Moreover, however, is the problem with how the character is written and portrayed. She’s so earnest, so native in a world that can’t suffer that sort of thing. She has no memory of her life before Christoph Waltz’s Dr. Dyson Ido found her cyborg body on a scrap heap and gives her a new body, and the film spends little time with her wanting to figure out what she is. Instead, it spends time world building other things, the existence of heavily cybernetic bounty hunters that serve as half of the police force in the dystopian Iron City that sits in the literal shadow of the floating supposed utopia of Zalem. It spends time showing us the blood sport of motorball, a mix between roller derby and the basketball/soccer-like game played in pre-Columbian Mesoamerica, and that becoming the best player of that game is one of the only ways to ascend from Iron City into Zalem, and that this is something that Alita wants to do, but never really gives us a real reason to care about it.

While the villain of the film is, nominally, Mahershala Ali’s Vector, who controls the Motorball sport in Iron City, and would appear the be one of the wealthiest people in the city. He promises everyone who works for him entry to Zalem above, and as he’s the one who sends the sport champions up, people believe he can do this. Quickly, however, we learn that he is but the servant of a powerful man in Zalem, Nova or The Watcher Behind the Eyes, who with Zalem tech watch through the eyes of his servants, and sometimes take them over as well.

With so much to tell and show us, the coolness of the effects and excitement of the action scenes gets bogged down and stymied. Could the film be streamlined by either cutting some of the extraneous world building, the plot lines about either Motorball or the Hunter Warriors, or the reveal of Nova that happens towards the end? Probably, but then you’d lose some of the cool effects and character designs.

What the movie does do well, however, is make me want more. I want to see a sequel to this, especially if Robert Rodriguez stays on as director. Well, how much Battle Angel sets up, I would love to see what an adaption of Alita: Tears of an Angel, the English title of the second volume of the manga, might look like, even if it means more uncanny and bugged eyed Alita. The cyberpunk world that Rodriguez builds is interesting and intriguing enough that I hope we get further movies because I do really enjoy seeing the canon of this manga adaption on screen.