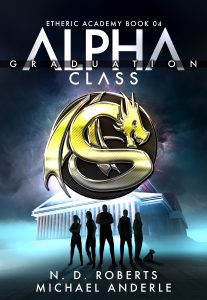 The puppy was curled on her bed in the corner of the office. She let out a sleepy snuffle, all four paws moving as she gave chase in her dreams.

Diane was distracted, tapping a finger on her lips. “When we agreed to take Devi in I never considered that we’d be too busy watching her sleep to get any work done. She’s no trouble at all; such a sweetheart.”

“Especially now she’s had the same enhancements as Matrix and can talk to us properly. Who would have thought a dog would improve our lives this much?” Dorene smiled as she watched Devi sleep.

“Hmm?” Diane dragged her gaze away from the dog bed. “I’ll miss her when we reopen. But she has an inquisitive mind when she’s not busy accessorizing. Having her around will make the students feel safe, especially after the attacks.” Diane shook her head, “Can you believe jihadi terrorists attacked us all the way out here?”

Dorene nodded. “Yes, completely. Although I think I was more terrorized by the sight of Bobcat’s backside pressed against the window than those idiots in the caskets.” She shuddered. “Ugh. I can’t repress the sight of that video no matter how much I try!”

Diane cracked up at that. “What’s the matter, DJ? Was the moon too bright for you?”

Dorene gave her twin a sour look. “You know it was, dear. Now back to business, if you’re all done? There’s been enough to do just getting ready to go through the Gate. Did Max and Van agree to help out with the kids?”

Diane nodded. “They’re making preparations as we speak. Max may need to be reined in a little. The last I saw him, he was shepherding a flock of antigrav pallets to the auditorium. When I asked him what he was up to, he said the least we could do while the men and women of the fleet protect our people is to provide a pleasant place to stay for their kids while they do it.”

“That man is an absolute treasure. We’ll go visit him shortly and see what we can do to help. But first, Devi’s protection vest has arrived and she needs to try it on for size.”

“Don’t I know it,” Dorene replied. She pulled a silver-wrapped box out from under her desk and began undoing the bow on the top. “She’s doing very well in her training, and I have faith she’ll be a good guardian for the school. She just needs some time to adjust to wearing her uniform before she has to wear it every day.”

Devi’s ears twitched at the rustle of tissue paper, but her eyes remained shut.

Diane lowered her voice. “You know as well as I do how we’re going to get Devi to wear that vest. We’ll reward her for being brave. None of Bellatrix’ and Ashur’s puppies like wearing this stuff, but I think something shiny might help get our girl motivated.” She nodded at the box on her sister’s desk. “I’m guessing you already thought of that?”

Dorene passed her sister one of the tissue-wrapped packages from the box with a wink. “You guessed right. I had a visit from one of ADAM’s fashionistas this morning and she dropped off our order.”

Diane peeked inside the tissue paper. “I think this might just do the trick, DJ.” She turned to the puppy. “Devi, sweetheart, we got you a gift.”

Devi jumped up at the sound of her name and trotted sleepily over to the desks. She sat in front of Diane and Dorene with her tongue lolling out and yawned. “A gift? What is it? Is it treats?”

“Is it pretties?” Devi’s ears perked up and she yipped with excitement. “I lovepretties!”

Diane smiled and held up a stiff puppy-shaped protection vest. “But to get the pretties, you have to try your new vest on before we leave for the auditorium.”

Devi looked up at her humans. “It’s not very sparkly, is it?” She nosed the matte black material. “I want to look pretty for my first day at school. Mother always says it’s important to make a good first impression.” Devi turned her back and looked away. “Won’t. It’s not pretty, and it will pinch me like the last one did.” She snorted her disapproval in case her bonded humans were unclear about her feelings.

Dorene unwrapped one of the tissue paper packages, revealing a sparkly clip-on tie in Academy colors. “It could be worse. Bethany Anne could have said you have to wear full armor like your brothers. The vest isn’t negotiable, Devi, but if you stop all this and turn around, you’ll see all the accessories we got to go with it!”

Devi’s nose twitched, but she didn’t turn her head. “Are those sequins I smell?”

“You’ll have to stop sulking and try on your vest to find out,” Dorene told the recalcitrant puppy, quickly wrapping the tie upagain. “I promise the vest won’t pinch. We made sure this one will grow with you–for a while, at least. Sweetheart, it’s important to us that you have some protection when school starts. You’re not just there to learn, you’re also guarding the students.”

“When you say it that way it makes more sense.” Devi huffed and hopped up to rest her front paws on Diane’s knees. “Very well, I will try it on, but thenI get the pretties, right?”

“Of course.” Diane chuckled as she fastened the straps underneath Devi. “All done.”

She shook her fur and let out a little chuff. “It doesn’t pinch, but I can’t make a good impression dressed in this! It doesn’t even match my pet-icure!” She held up a paw to show Diane five glittery purple claws.

“Very nice! Did one of the students do that for you?”

“It was Mischa.” Devi’s tail thumped. “I like Masha and Mischa.” Her head swiveledat the sound of crinkling tissue paper. “Are those my pretties?”

Dorene pulled out the sparkly tie and a pair of matching bows and held them up for the puppy to see.

Devi gave her humans a doggy grin. “Now that’s more like it! Are they from ADAM? His bows don’t pinch like the ones from the pet store.” She raised her head so Dorene could clip the tie onto her collar, being careful of the translation device that was fixed to it so she could talk to anyone who didn’t have a chip.

“They are,” Dorene assured her before pressing the bows gently to her ears. “He also told me his team hasimproved the adhesive so they can be re-worn.”

Diane scratched the top of her head. “You look adorable, Devi. Are you ready to make a big splash at school?”

“I was ready weeks ago!” Devi danced in a circle, chuffing as her tie flapped. “I don’t want to wait. I want excitement! I want to learn!” She flopped down and rolled over with a dramatic sigh.

Dorene tsked. “Now, Devi, we’re about to leave our solar system and travel to a new one. Surely that’s enough excitement?”

Devi sniffed noncommittally. “I suppose so.”