An Exciting Sneak Peek at Defenders of Magic 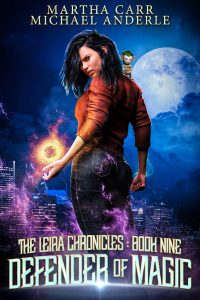 There's a brand new book coming to The Leira Chronicles and we have a HUGE snippet to share with you.

As most of you know, Martha and Michael have been working on enhanced editions of The Leira Chronicles and re-releasing them. What you may not have known is there are 8 brand new books coming your way starting next week! Defender of Magic is the first of the new books and we were given a special gigantic sneak peek to share with you. Defender of Magic is on preorder and goes live on Monday! Check out part of the sneak peek below, then download the first three chapters at the link below the teaser!

The loud ring of Leira's cell phone broke through her deep sleep. She groaned, rolled over in the bed and slapped at the nightstand. Correk stirred in his sleep and swatted at the air. “Yumfuck, those are mine,” he muttered, his face pressed into the pillow. Leira gave a crooked smile and put one hand on his back, brushing aside his long hair. She pulled the phone toward her face and squinted at the bright light from the screen.

Blocked number. Her heart rate picked up, hoping it was one of her new contacts.

It was taking some effort to cultivate the hidden eyes and ears in Washington DC. Turner Underwood was helping with the start of a network among the magicals and there was some progress. Still, no one was giving up Wolfstan Humphrey. Well, almost no one.

The Dark Families were easier. There were more disgruntled witches and wizards willing to talk for a price. Family, go figure.

I went out on my own to hunt these motherfuckers. Still takes a village… just a slightly darker one.

Leira sat up and swung her legs over the edge of the bed, kicking a moving box with her toe. “Fuck me!” she hissed, swallowing the rest of it. She glanced back at Correk and got up, weaving around the boxes to get out of the bedroom and down the hall.

“For the love of…” Her foot recoiled from a piece of broken stone in the unfinished part of her new house. Their new house.

“You're coming in hot. Everything okay?” General Anderson barked into the phone.

Leira swallowed, balancing on one foot and leaning against the kitchen counter. “Yeah, just stumbling around in the dark. Hit a few domestic land mines.”

“I have a tip for you that should make you feel better. I know you don't work for me anymore, but this one is going to take your unique skill set.”

“One that can't wait until the sun comes up?”