As a person who reads a plethora of books each month, I tend to let my imagination get the best of me. After some research, I’ve come to learn that there is a stigma surrounding girls and Dungeons and Dragons. A good amount of females play the game, and some even make it their living. Well, I’m here to change the idea that it’s a “boys game”. After all, I'm just a girl, who got sucked into this world. (But not like in real life, because that would just be freaky.)

Once Upon A Time, My Partner Decided to Eat, Live and Breathe D&D

It wasn't always this way. I was always more into pop culture; movies, TV shows, and strange celebrity diets. Although pop culture inhabited a nice chunk of my life, books are what hold the largest place in my heart. Lately, however, my household has been filled with characters, fantasy, and not from my books, but this world where you can be anything or anyone.

No, it’s not a setup for My Little Pony.

(Is that what it's called? I'm still technically new to this land.)

If anyone were to ask, “well, what first drew you to D&D?”, I would probably mention that I've actually always wanted to play, but my friends weren't as open-minded as I was. My partner, however, is the polar opposite. He is an extreme gamer-although he will never admit it. He once had roommates who played, but at that time he never truly dove in and immersed himself. Until six months ago. *Enter me*- a total book nerd who sees the opportunity to bond more, and gives this game a shot.

I mean come on; at the end of a long day, who doesn’t want to shed their skin and be someone else? Dungeons and Dragons is a de-stressor. People who are natural creatives or are interested in using their noggin for daydreaming are ideal in order for this game to truly work. And the best part, you ask? 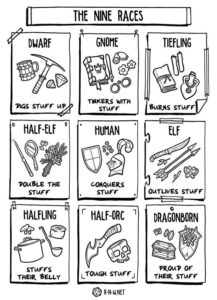 No one will judge your character, questions your ideas, or get pissed off when you choose to do something wild in the game.

In fact, its encouraged! All the world's a stage, and so is Dungeon and Dragons. It’s been around since the 70’s. It's only growing more popular as the years roll by. I bet at least one person in your friendship circle has either heard of the game or even made a character once. The eccentricities of D&D start to shine when the development of your favorite self is forged into your own characters. Once they begin to progress along, you soon come to realize this is your own action-packed adventure.

For the love of Tieflings, D&D is not “geeky”.

D&D encompasses more than just a small portion of “geeky” culture. Without truly knowing it, everyone can find themselves lost in this wonderful, ever-expanding world of RPG, sci-fi, steampunk, and everything else in between. There's a little bit of everything when it comes to playing this tabletop game. Another fun fact? You can play in-person OR online. Sites like ROLL20 and Fantasy Grounds offer players a virtual escape from reality.

Ironically, my books began to look less and less appealing the more I got into Dungeons and Dragons.

What D&D offers me is the emotional connection I had with books when I was younger. Once again, I felt myself forming a bond with the hero of the story and finding myself lost in the adventures of fiction. D&D accentuates that feeling as it allows you to bask in the glory of your accomplishments with friends. Who doesn't want to bring their daydreams and aspirations to life? Lost in a world as exciting as you make it, the possibilities are endless.

Seriously, take it from one reader to another. Books will always be my main interest. In fact, I will continue to have books to catch up on. Dungeons and Dragons is an experience like no other. So play it, watch it, and have fun.