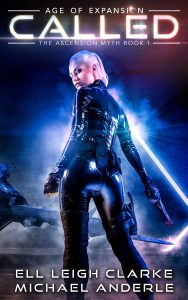 Gaitune-67, The Other Side of the Demon Door

Molly, Joel and Brock stood on the balcony overlooking the most enormous hangar deck they had ever seen. Advanced starships cluttered the deck, positioned as if prepared to scramble at a moment’s notice.

Awestruck, they remained motionless for several minutes, emotionally swinging between disbelief and excitement.

Joel was the first to try to speak. “Isn’t that…?” His voice trailed off.

She could hear Brock breathing behind her. “Holy mother of fuckery!” he whispered under his breath.

She’d spent so many hours searching as a child, fantasizing about the Etheric Empress, wishing she could be one of her guards and fight the good fight for the Empire.

For years she had worked in secret, hijacking her parents’ EI in order raid the dark web for intel of sightings or references in history, near and far. Anything that would give her a clue or direction.

The pull the legend had on her was deep. And profound. And inspired.

When the team had shown her the painted-over insignia in one of the corridors just after they had moved into the safe house, she hadn’t dare imagine that it might have been the insignia. The female skull with fangs. The slight ridges and the odd English letter they could make out… Rationally, it had been inconclusive.

But now, standing on the platform overlooking the immense hangar with ships of all different sizes—with that insignia on every single one of them!—was like a lucid dream materializing in front of her eyes.

And then she saw it. The image that would confirm everything she had ever wondered.

Her heart missed a beat.

Painted on the side of the cockpit of the largest ship in the center of the hangar was a photorealistic painting of the Empress herself. Molly had never seen a picture of her before. She had read accounts of her being stunningly beautiful, and the usual about her being formidable and deadly. But she’d never been able to find an image.

But the painting of the fanged human female, the Queen Bitch herself, was enchanting. It seemed to have a mystical quality that invoked a sense of power and pride in those who looked upon it. Molly could tell from the reactions of Joel and Brock that it wasn’t just her.

“We should get the others in here,” she said, finally becoming aware of what was happening. “We’re going to need to look into what all of this,” she waved around the hangar, “is, and why it’s here.”

Joel cut in, almost absently, “—and if we can play with it.”

He was still transfixed by the enormous ship in the middle of the hangar. Or rather,  by the image of the dynamically beautiful Bethany Anne painted on the side of the ship.

“Who is she, though?” he asked, not really understanding Molly’s reference to the Queen Bitch.

Molly was beaming, and still enthralled. “That is Bethany Anne. Human turned vampire, Savior of the human race, Yollin Empire, and Etheric Queen of Everything.”

She took a breath, and seemed to ground herself a little.

Brock finally found his voice. “But wasn’t she a bad guy? Like a villain? My grandparents used her as a warning when we were being bad.” His look of awe was slowly morphing to mild concern.

He continued, his speech accelerating a little as his fear kicked in. “And if this is her stuff, and we’re here, living on top of one of her disused bases, then might she be coming back for it some time?”

There was a loud crackling, then an audio feed similar to the one which had initially granted them access started up again.

“She’s not coming back any time soon,” announced the human-sounding voice. “But there are things we need to discuss before you can play with these…toys.”

Molly and Joel looked at each other in shock. Molly twigged first. “He can hear us?” She immediately looked around for cameras and microphones.

Joel scanned the other direction behind her. “Seems like,” he agreed softly.

The voice chuckled a little. “Yes, yes. I can hear you. And see you. But enough of that for now. Assemble your team and then we can talk. Join me in the conference room through the second corridor when you hit the hangar deck. Thirty minutes. I’ll explain everything.”

The voice clicked off.

Brock’s eyes went wide. “This is some scary-ass juju. If this is the Queen Bitch’s stuff then this is bad. If someone has stolen her shit and put it here, then this is double-bad.”

Molly pursed her lips. “Brock. Chillax. It’s fine. This is going to be fine. If the voice on the comm wanted to harm us, he probably would have done it already. If this is Bethany Anne’s stuff, then we’ll just give it back to her. And if someone stole it from her, then we’ll hunt them down, kick their fokking asses, and then give it back to her. It’s not a big deal.”

Her eyes danced with glee as she spoke. “But I for one am excited to find out what the hell is going on and why we ended up here.” She turned to face her comrades.

You’re thinking about how this safe house ended up on our list again, aren’t you?

Yes, I am. I’m also thinking this voice might be able to give us some answers.

When Molly spoke again, her shoulders were back and her voice had a kind of resonance neither Brock nor Joel had ever seen in her before. “OK, let’s gather the troops, let them know what’s going on, and then find that conference room and get some answers.”

Joel and Brock shifted, their awareness still fixed on Bethany Anne’s image behind her. They nodded and started to shuffle back out of the door, their gaze being the last thing to leave the hangar.

Molly grinned. “This is going to be fucking epic.”

I Don’t Call You Mike

As you may have gathered MA and I have discussions.

Anyway, this one instance he’s referred back to a bazillion times by now, saying we must share this in our author notes.
I can’t even remember what we were discussing, but he has a way of trying to make a point politely, by being self-effacing. (Oh yeah Michael, I’m totally onto you on that….)
So, during one of these ‘discussions' he reflected back to me:

Mike: “So what I hear you saying is Mike, you’re just being stupid.”