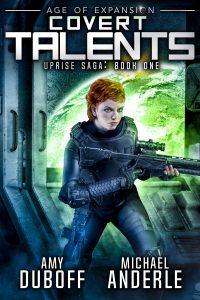 “Have a seat, Lieutenant.” Kurtz gestured toward a metal chair across from his desk.

“Thank you, sir.” She sat down but didn’t bother to get comfortable. Prior experience with that particular seat had revealed it was impossible.

“I understand that you ran into some trouble at the NTech lab.”

He has such a way with understatement. Ava nodded. “Yes, sir. Our intel said the facility was abandoned, but we encountered armed guards and a military-grade mech.”

“Barely fit in the hallway, sir.”

Kurtz frowned. “I’m glad your team was able to fulfill the mission objective despite those setbacks.”

‘Setbacks’? That’s how he’s going to play it? Ava leaned forward in her chair, forearms resting on her knees. “Sir, may I speak freely?”

He gave the hint of an exasperated sigh but quickly composed himself. “Permission granted.”

“Someone doctored the mission brief.”

Kurtz studied her. “What makes you say that?”

“The resistance we encountered wasn’t some new arrival that walked in moments before us. They had been there, and there wasn’t any shielding around the facility to have hidden the thermal outputs. Someone knew that facility was occupied, but the FDG would not have received data retrieval authorization for an active private lab. They wanted us to think it was abandoned so we’d go in.” Ava leaned back and crossed her arms.

“I can’t deny the possibility,” Kurtz said after a ten-second pause.

The colonel’s eyes widened, taking on a hint of yellow. “Why would I put one of my best teams at risk like that?”

“Because you knew we could handle it, like we did.”

“You have a unique ability, Ava.” Kurtz folded his hands on the desktop. “Few others would have been able to get the password for those files.”

That was a roundabout admission of guilt, if ever there was one. But why? “Before we left, the man I… ‘interrogated’… indicated that there’s something going on with the Nezarans, and potentially beyond that.”

The colonel swallowed. “The FDG’s responsibility is to assess threats and carry out orders in the best interest of the Etheric Federation. You have performed admirably in retrieving information to support those goals.”

If the FDG hadn’t worked out, Kurtz would have made one hell of a politician. Ava flashed a prim smile. “Happy to do my part, sir.”

Kurtz steepled his fingers. “It’s been, what, nine years since you joined the FDG?”

He nodded. “I can tell you’ve been around long enough to know when a superior officer is dodging your questions.”

No shit. Ava decided a shrug was the best response.

“Well, your observations at the NTech lab support a larger pool of evidence we’ve gathered over the past eight months. We’re at the leading edge of a crisis.”

That was surprisingly candid. Ava came to attention. “Sir…?”

“We’ve been tracking a group of researchers in NTech performing illegal genetic experimentation,” Kurtz explained. “The lab you infiltrated was one of those facilities, and the data you retrieved is documentation of the experiments.”

“What kind of experiments?”

“We believe they are trying to make a hybrid—bringing together the traits of Weres and vampires.”

Ava’s mouth involuntarily dropped open. “A… Were-vampire? I thought the nanocytes were incompatible. Once you had one—”

“That had always been our belief, yes. It would seem NTech has discovered—or gained access to—a way to program a new strain of nanocytes. Using some of the old technology from the two Kurtherian clans, they are bypassing the incompatibilities that caused the two types of nanocytes to attack each other. NTech’s reports refer to this new group as the Hochste.”

Were-vampires? What the fuck would a person like that be able to do?! Ava shifted in her chair. “Sir, why are you telling me this?”

“Because we fear that the Nezaran Coalition intends to use these Hochste to attack Alucia, which will soon be a member of the Etheric Federation. We want to stop that conflict before it starts.”