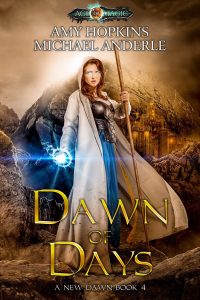 Donna stared into the fading pinpricks of red as they dwindled, and winked out. Blood dripped down her arm, sliding from the knife to her elbow and spattering into the dirt below.

She slipped the knife back and threw the remnant back into a lifeless heap. A smile touched her lips.

Her eyes turned down and a frown marred her face as she noticed the mess. Casually, she reached up and ripped her dress, splitting the shoulder seam and yanking her sleeve off. She balled it up and wiped her arm before tossing on the body in front of her.

Donna turned away. The morning sun cast a long shadow in front of her and she watched it as her eyes took on a glow of their own, turning white as a flawless pearl.

A mumbled word escaped her lips as her shadow changed. It stretched taller, thinning to give her the figure of a lithe young woman. Then, it widened, her neck disappearing in folds of cloth.

Finally, a long staff sprouted from her hand.

Her small smile turned into a grin—not on her own face, but the false image she wore. Donna looked down and brushed off her new white robes.

The ashen staff she carried had the weight and balance of a real one, and the blue of her dress matched her memory of one she had seen on the Mystic Master.

“Finally,” Donna said, looking about. “It’s time for the Master to return to her Temple.” A throaty laugh bounced through the forest. “They won’t know what hit them.”

A remnant charged at Marcus and he aimed his rifle, pulling the trigger.

“Dammit!” He yelled. The close-growing trees in this part of the Madlands suddenly seemed to loom overhead, despite the dappled sunlight shining through the patchy winter foliage.

Marcus tried the weapon again, then slapped it hard. A third pull still yielded no blast from the weapon. The remnant before him laughed, and crouched low, ready to attack.

Julianne swung her staff, feeling it vibrate as it thunked against the remnant’s skull. The brittle bone exploded, showering blood all over her clothes.

Marcus twisted the rifle behind his back, fumbling to attach it to his belt.

“Leave it,” Julianne said. “Unless you’re so soft you’ve forgotten how to fight without it?”

“Soft?” Marcus called. He slid his sword out with a zing and took the hand off a nearby attacker, then spun to meet a second. That one dropped to the ground, dead, a moment later. “I’m not soft!”

“Duck!” Julianne called as the one-handed remnant stuck its head up behind Marcus. “Bad move, buddy,” she said to the remnant as Marcus threw himself down to avoid her next strike.

Staff met face, and teeth sprayed across the ground. The remnant howled in pain.

“Sorry?” Marcus said, a hand cupped behind his ear. “What was that? I can’t understand you… no teeth, and all.” He slashed upwards, piercing the remnant’s belly and spilling long, slippery strands of intestine all over the ground.

The dead remnant crumpled, falling back as Marcus pushed it away from him with the toe of his boot.

Artemis lurched up from his huddled position to lean over and vomit. He emptied his stomach, and sat back down.

Marcus cocked an eye at him, then shrugged. “Yeah. It does smell pretty bad, doesn’t it?”

That made Artemis retch again.

“Marcus!” Julianne chided. She passed Artemis her water, wincing when he looked at the glob of flesh stuck to the side and leaned over again. “Oops. Sorry. Maybe we should head back to the river we passed earlier.”

Artemis pulled himself to his feet and lurched off back along the path without a word. Grabbing the reins two of the horses, Marcus followed.

Julianne eyed Cloud Dancer. The horse stared back as if daring her to try and mount while still covered in blood and innards. “Fine,” Julianne said. “We’ll walk.”

“You know,” Marcus said, tying the horses to a tree and pulling off his shirt. “There are less messy weapons you could use.”

“What, and give up my staff?” Julianne said, dipping the white stick into the water and letting the gentle waves wash the stains away. She made sure to stay downstream from Artemis, as he splashed water on his pale face.

Marcus shrugged. “It’s your staff, or your pretty blue pants.”

Julianne snorted. “My pants are fine, nothing a good soak and a scrub won't fix.”

She looked down, wondering if it was worth trying to clean them now. Blood, both fresh and old, had saturated the fabric. They were already becoming stiff—it would take hours to clean them out properly. She settled for wiping the worst of the mess off her boots with a clump of grass.

“There must be a spell for that,” Artemis mumbled. “It would fall under the physical realm, of course… but if they had a way to target the organic material, and lift it…”

Marcus shook his head as Artemis continued to ramble about the theoretical application of a magic he couldn’t cast. “Why is he with us, again?”

“I need him,” Julianne said, patiently. “For a time, at least. If we don’t transcribe what he’s learned, it might be lost forever. And he’s learned a lot.”

“You mean, he hasn’t written it all down already?” Marcus griped. He motioned at Artemis’s horse, loaded with leather bags that were stuffed not with clothes or personal terms, but piles and piles of paper.

“You’re not taking my work,” Artemis snapped, suddenly coming back to the conversation. “You’ll get those grubby fingerprints all over it!”

Julianne sighed. “He won’t let us touch it without him there. So, we’re not only stuck with him, I’ll have to fund an escort to get him back when Bastian has the school up and running.”

“Rude,” Artemis muttered, talking into the stream. “Talking about me like I’m not here.”

“Artemis, I spent half the damn trip trying to make conversation with you,” Julianne pointed out. “You didn’t respond to a thing I said.”

Julianne rolled her eyes as she climbed up onto Cloud Dancer’s back. “I know you love us, Artemis. That grumpy old man persona is all an act.”

He snorted, then awkwardly mounted his horse. Wth Marcus leading, they set off through the Madlands.