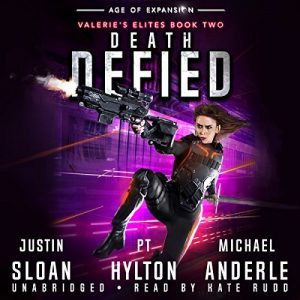 An evil intelligence bent on galactic domination is about to meet the Justice Enforcer.

When a mysterious AI demands the release of a criminal, it gets something else instead: the wrath of Valerie’s Elites.

Now the team must travel to a remote space station to uncover the secret their enemies want to keep hidden.

Valerie and her team will join with resistance fighters on a secret moonbase to take on mechs, giant robots, and an artificial intelligence that can infest any advanced technology it encounters.

No one said bringing Justice to the stars was going to be easy.  But that doesn’t mean it’s not going to be fun.