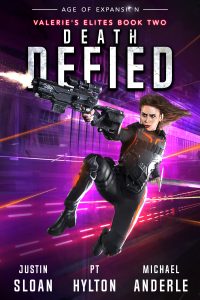 Days spent on Tol were nothing like back on Earth, and it wasn’t only because Valerie had just helped institute a successful coup. While on Earth she had hidden in the shadows, forced to try and keep the status quo of not too many humans knowing about the existence of Weres and vampires—of which she was the latter.

Up here though? Here she was a hero, the liberator of the people. As much as she insisted it hadn’t been only her, and even tried to push the credit over to Kalan, where much of it was due, the Skulla and Norral were hard to convince.

It wasn’t only a matter of them listening to her on this matter, there was the issue that, until Valerie had come along, the Norral were slaves to the Skulla. Now this whole system was being reworked, with Sslake as the new leader, trying to put the pieces together of this metaphorical vase she’d broken.

Of course, in the process of breaking it, she’d made it ten times better than it had been. No more slaves, no more people having to fight for their right to live here or to rise up in society.

What the new system would be like, Valerie wasn’t trying to influence. If Sslake needed them, he would ask for their help.

At the moment, she just wanted to find something to eat that wasn’t the local variation of flowers or Rantu, their version of panther. It was their local specialty, but after having been friends with a Were-puma for the year or so before leaving Earth, she just couldn’t see herself eating any animal that even remotely resembled a cat.

“Maybe the Norral have a better diet?” Garcia offered, as he and Robin walked with Valerie through the bazaar. They made their way over toward the Norral tables, not happy to see that, even though they weren’t slaves anymore, their sales tables were set up in the back and with very little room.

Too bad Kalan and Bob had to take off so soon, she had a feeling Kalan’s tastes were much more in line with her own, and he probably knew where to look.

A shot went off and everyone ducked—everyone except Valerie, who turned and scanned the crowd looking for the shooter. She didn’t have to look hard, because there was a tall Pallicon, standing at least a head above all of the Skulla that had dove for cover. His pistol was aimed right at Valerie, though he’d clearly missed.

“Wandrei skum!” he shouted, about to shoot again, when an enhanced Skulla tackled him, two more joining a moment later.

“Looks like our friends haven’t abandoned us,” Robin said with a raised eyebrow. She nudged Valerie and nodded to the far curtain of the bazaar, where Warlord Palnik stood watching, arms crossed. Several more of those large-armed Skulla stood by as his bodyguard.

In spite of everything that had changed, there were still classes here, and Palnik was still one of those at the top. If not for Sslake, in fact, he might be at the top. Before it had been Warlord Charbon, who Valerie had taken out as part of her mission, and the top warlord who had called himself the Bandian, after a race of aliens who, it turned out, Kalan actually belonged.

“Looking for trouble,” Garcia replied. “Maybe I’ll bring him some.”

Valerie held out a hand, then used it to wave to the warlord. In response, all she received was a scowl.

“To be fair, you changing the system essentially stripped him of any real power,” Robin pointed out. “You could see why he would be annoyed.”

“And we saved lives when we did so.” Valerie started walking toward him, motioning the others to follow and simply ignoring the shooter. “I’d say he either starts living in the system or gets out of it. Pretty black and white, if you ask me.”

Palnik waved his guards off at Valerie’s approach, walking over to meet her halfway.

“I trust you’re finding a new way to entertain yourself?” Valerie asked, referring to the fact that the fighting arena was closed now.

He sneered, then turned that into a frown. “Sslake’s looking for you, asked me to locate you. Looks like I get to be his personal errand boy.”

“You must love that,” Garcia said with a chuckle.

“Maybe I break your legs and we see who’s laughing?”

Garcia took a step toward Palnik, and to the warlord’s surprise, his guards didn’t step in to do a damn thing. It hit Valerie that it was likely because of the legends surrounding her and her team. Nobody wanted to mess with them, not with what had happened in the fighting arena, nor how they had taken down the false Bandian at his strange base in the jungle.

“You were saying?” Garcia asked, towering over the warlord.

Behind them, the other Skulla were taking care of the shooter, dragging him out of the tent, unconscious and with a line of blood dripping from his nose.

Palnik shook his head and turned to lead the way.

“He’s not at his quarters?” Robin asked.

“Actually, he’s had a team going over the Bandian’s base since you took it out, and thinks he found something quite intriguing. He asked for you all specifically, and said it might be a job for you and your team.”

Suddenly the lights went out completely and an explosion sounded, followed by a feminine voice, loud and carrying as it said, “It has come to our attention that new leadership is in play on Tor, and you have yet to pay tribute to your gods. We require blood. We are taking hostages. On the fourth hour, if you haven’t fulfilled our demand, one will die every hour until we have the Bandian. Send him, and be quick.”

With that, the lights returned to normal and only the far off screams could be heard.

Valerie took a split-second to process this, then ran outside, leaping over tables and shoving locals aside until she was past the tents and could see that the threat was real.

Hovering over the city was a massive spaceship, drones pulling back into it—but the drones were carrying their screaming hostages.

Half a dozen fighters rose up from the city, but as they moved for the ship above, their engines all seemed to die and they went careening back into the city creating new explosions and subsequent fires.

“Well, we’re off to a great start,” Robin said, running a hand through her hair.

Valerie turned to the nearest Skulla. “Who are they?”

He shook his head, eyes never leaving the sky.

“Hell, at least they only want the Bandian.” Robin shrugged. “No brainer, give him up.”

“We can’t just go around handing out prisoners to whatever alien group comes along making demands like this.” Valerie stared off at the fires, almost wishing she didn’t always have to be in these situations, but knowing she was the most qualified for it.

“Don’t forget,” Garcia cut in, “it’s not exactly we, is it? Not like back home. Here, we’re the mercenaries, not the government.”

He had a point.

“Looks like we better pay our friend Sslake a little visit then,” Valerie said. “But first, let’s make sure nobody’s hurt over there.”

They all took off, running for the fires and anyone who needed their assistance. It bothered her that she wasn’t going to have final say here, but if she was going to play her role, she had to do it by the book. Although, the way she figured it, since there wasn’t technically a book yet, she had some wiggle room.