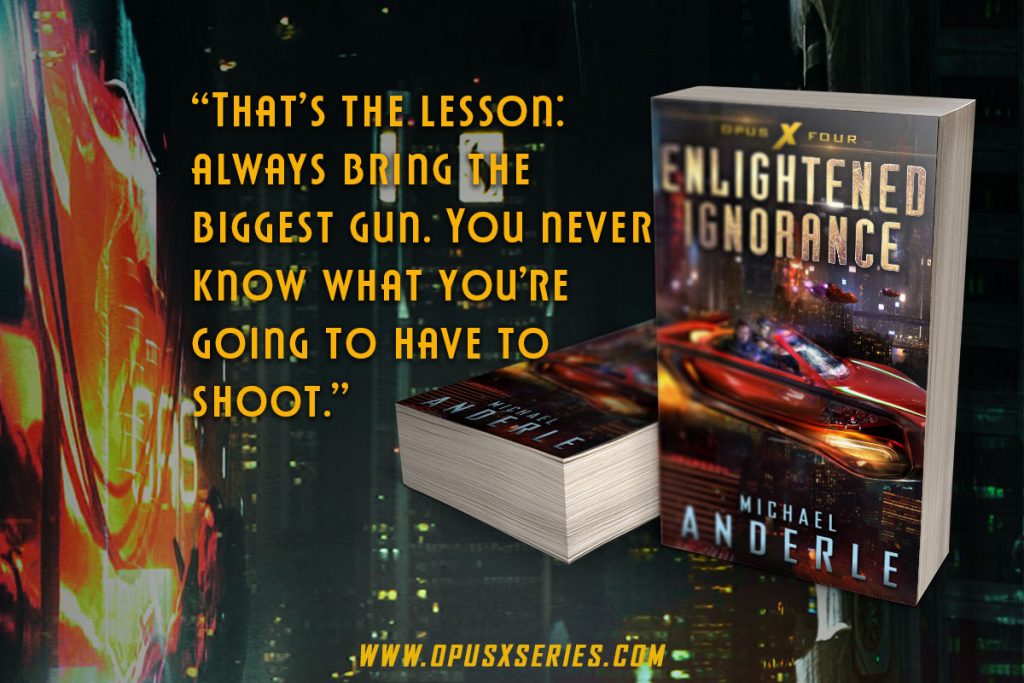 YES! It's that time again, Snippet Time! Are you ready for the next exciting sneak peek at Enlightened Ignorance?

Erik yawned as he stepped into Captain Ragnar’s office, Jia right behind him.

They had been going over some old reports when the captain summoned them. Maybe another reporter needed to ask about his underwear color. He almost grinned at Jia. The way she’d reacted had made it worthwhile.

I should have said something crazy, he thought. That would have been fun.

He’d have to take the next opportunity that presented itself. Unless he was about to receive a gift. “What’s up, Captain?”

“Something you’ll find interesting.” Captain Ragnar tapped his PNIU. Erik’s and Jia’s both chimed. “New case.” He scratched at his beard. “Unless you want to spend the rest of the week going over those old reports?”

Erik made a face. “Nah, I’m good. The most annoying thing cops share with soldiers besides people shooting at you is all the reports.”

“Bureaucracy is the blood of the UTC.” Captain Ragnar summoned a data window depicting a smiling dark-haired Asian woman in a bright green dress. “This is Chau Nguyen. Thirty-two years old, she’s a personal assistant. She worked for Euterpe Corporation until yesterday.”

“If by big,” he turned to Jia, “you mean the largest music-focused conglomerate in the UTC, then sure. They’re headquartered in the Hexagon.”

“Ok.” Erik whistled. “Never been much of a music guy, but I’ve heard the name bounced around.”

Jia stared at the image. “Wait, worked? Not works? Was she fired after looking into fraud? More embezzlement?”

Captain Ragnar shook his head, his faint smile disappearing. “I only wish it were that simple.” He swiped his hand through the window. A new image appeared of a pale, rigid Chau slumped over the control yoke of a flitter.

Jia wrinkled her nose. “I see what you mean.”

Unless Chau was a secret gangster, they were dealing with an innocent person killed Uptown. Erik had shed his illusions about Earth’s perfection decades ago, but that didn’t mean he wasn’t bothered by innocent lives being cut short.

Captain Ragnar nodded. “She was found dead yesterday on a parking platform connected to her residential tower. There were no immediate signs of foul play. Officers on the scene said it looked like an OD. Her PNIU is unaccounted for, and they haven’t been able to track it. I’ve already got Digital Forensics looking into it.” He swiped again. “She scratched a message into her dashboard, maybe because she didn’t have her PNIU.” He tapped his PNIU, and the text of Chau’s last message appeared in a new data window.

Jia narrowed her eyes and read aloud. “I can’t take it anymore. It’s just too much stress. I’m ashamed. I’ve been using drugs. If I end it now by my own hand, at least you all won’t be blamed for me being so antisocial. I’m sorry. I’m so sorry.”

Erik blinked at his partner in surprise. Whatever Jia’s faults, she had always shown great compassion toward victims. Even when she was having trouble in prior months, it manifested as anger toward criminals, not a lack of respect for their victims.

“Please.” She pointed. “This isn’t a suicide.” She leaned forward. “Some monster killed this woman, and has inflicted even more suffering on her family with a fake suicide note.”

Captain Ragnar nodded slowly. “Forensics didn’t get anything useful other than her DNA on the scene, but that doesn’t mean it’s not a suicide. The body was flagged by a surveillance drone, and a nearby patrol unit went to do a check. They contacted the listed emergency next-of-kin, her sister, who swears up and down that Chau would never take her own life. She was a little emotional in her statement, but she implied Chau had been being secretive and might have some sort of trouble at work.”

“A lot of family members don’t want to accept the truth in this kind of situation,” Erik rubbed his chin. “We sure this isn’t that? People do kill themselves.”

“They do.” Jia frowned. “But this doesn’t smell right.”

“Is that your gut talking?” he pushed.

“It’s rational analysis talking. If she was going to kill herself, where’s her PNIU? Why didn’t she send a message instead of scratching her last thoughts into her dashboard? There’s no reason for a suicidal woman to destroy or throw out her PNIU, but there’s all the reason in the world for her murderer to do it, especially if she managed to record them. Someone thought they could get away with murder, and we won’t let them. I’m outraged for the victim, and I’m angry that they thought that a weak coverup would be enough.”

Erik stared at the message, considering the evidence gathered so far. Everything Jia said made sense, but his time as a detective had proved people could fall into their own darkness too easily. Conspiracies choked the universe, but those conspiracies didn’t cause every bad event.

That didn’t matter, though. If his partner wanted to investigate, they would investigate. She would never need to worry; he would always have her back.

“We can’t be sure until we investigate,” Captain Ragnar commented. “And if the sister’s right about Chau being secretive, that means she might have stumbled upon something, especially given who she was working for.”

Erik snorted. “Let me guess, Euterpe is a Ceres subsidiary?”

Captain Ragnar smiled but shook his head. “No, but she worked as a personal assistant for Rena Winston,” he explained as if that was all the data anyone needed.

“Rena Winston?” Erik wrinkled his forehead in confusion as he turned to Jia. “Who the hell is that?”

“A superstar singer,” Jia explained. “She’s from Remus, but she’s popular all over the UTC, especially on Earth.”

“How many non-Earthers can you think of who have hit it big on Earth?” Jia challenged.

“I don’t pay much attention to that kind of thing, other than sphere ball,” Erik answered.

“The upshot is that she’s a big deal, and she’s not even twenty. She is starting a world tour soon. Even some talk of her doing a core worlds tour in a couple of years. She was discovered by a talent scout when she was a young kid and moved to Earth.”

Erik eyed her, a smirk playing on his lips. “Since when are you into superstar singers?”

Jia rolled her eyes. “She’s been everywhere in the news, Erik. She’s hard to miss.”

Jia opened her mouth to retort but snapped it shut before offering, “I’m not into her kind of music, but she’s supposed to be the next Aline Bisset.”

Erik stared at Jia like she was speaking Zitark. Another superstar singer from a core world colony? “Aline Bisset?”

He shook his head. “She also from Remus?”

Captain Ragnar chuckled. “What did you do for entertainment on the frontier?”

He looked at his boss. “Played a lot of darts?”

Jia shook her head and sighed. “Aline Bisset. You know, the Angel of Marseille? She had that song Hyperspace Love? I mean, she’s retired now, but she’s not that old. Her career was starting around the time you joined the Army.”

“I didn’t pay a lot of attention to music on the frontier, and not much even before.” Erik gestured at the window. “But that doesn’t matter. I get the point. This Chau Nguyen was a personal assistant to some big music star, and she started acting sketchy and ended up dead under suspicious circumstances. This smells like maybe this Rena Winston has something to hide, something that might hurt her career.” He looked at the captain. “Is Euterpe cooperating, or are we getting a standard-issue corporate see/hear/speak no evil?”

Captain Ragnar chuckled. “Kind of. They’re not happy to have cops sniffing around, but they’ve agreed to let you two come in and talk to people without a warrant. In exchange, we’ve agreed to keep this low key.”

“If this is a homicide, time is of the essence. We don’t have enough evidence to kick down their doors, and they can make life tough for us. If this is nothing more than an unfortunate suicide, there’s no reason to mess with Rena’s career.”

Jia folded her arms. “At least they aren’t blocking us from the beginning. That might mean they care a little.”

Captain Ragnar managed a sheepish smile. “My daughter would never forgive me if she found out I messed with her favorite singer’s tour without a good reason, but for now,” he pointed to them, “I want you two to proceed on the assumption we have a crime to uncover. First step, go check with the coroner. She did a full workup last night.”

“Don’t worry, Captain.” Jia spun on her heel. “If there’s nothing there, we’ll clear this right up. If there’s more, we’ll find whoever is responsible.”

The door clicked behind them. “I don’t doubt it for a second,” he replied to his now-empty office.

Hmmm…Do you think Chau stepped into Erik and Jia's ongoing investigation? Or is it just the normal music industry crime? Only time will tell.

Get your pre-order here of Enlightened Ignorance at your favorite e-Retailers today: 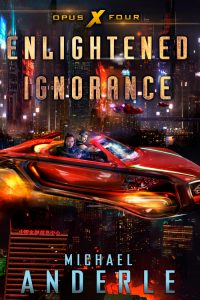