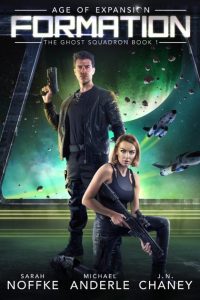 T’turk played with his drink. His four shipmates were rowdy and occasionally bumped him, so he had to be careful not to spill his alcohol.  He looked around Five Trees, the only damned bar worth visiting, in his opinion, for five systems.

That wasn’t saying much, of course, since the only people living out this far from the Etheric Empire’s territory were pirates, miners, and smugglers. Bastards, all of them.

“My kind of people,” he muttered to himself, smiling as his shipmate Fr’ling caught the eye of one of the girls.

Fr’ling wouldn’t be leaving this space station with much money. Hell, neither would the other three. By the time the night ended, they’d each spent most of their earnings.

Nursing his drink, he looked around the establishment, blinking with his yellow eyes. There were a lot of Kezzin in the bar tonight, including himself. Their red skin gave off a familiar glow in the artificial light. T’turk’s homeworld wasn’t far from here, so it was common to see his people on many of the stations in the neighboring systems. He liked it that way. The rest of the galaxy was far too crowded with non-Kezzin species, like humans and the other Etheric Empire scum. He couldn’t stand any of them.

It was unfortunate, then, that he saw a man sitting on a stool with his face planted on the table. A human male who didn’t belong here.

T’turk smirked. Perhaps he’d have a little fun today, after all.

“Hey, you,” grunted T’turk as he got up from his table and walking to where the man was sitting. “Human.”

The man had his face on the table—probably passed out from too much alcohol. “Look at this guy,” said T’turk. “Typical human. Can’t even handle his drink.”

The man moaned, shifting a little.

T’turk leaned over him and examined his equipment, hoping to find some money or possibly a key to a ship. The bastard wasn’t holding much except for a gray bag on the seat next to him. T’turk reached for it.

“Don’t,” said the human, slowly looking at him.

T’turk could never tell one human from the next. They all looked like a bunch of slugs to him, ugly and spongy. This one was no different.

“What are you trying to hide, human? Got yourself a secret stash?”

The man said nothing.

T’turk laughed. “That’s what I thought. Too bad you were stupid enough to come in here.” He reached for the bag.

A hand grabbed his wrist, surprising him. “I said don’t.”

T’turk paused, glancing at the man again. “Do you have a death wish, meat sack? Back off before I kick your ass.”

“No can do,” replied the stranger. “That’s my stuff. I need it more than you do.”

“It’s mine now, unless you want a bullet in your empty head.” T’turk shook his wrist free, then took the bag and began emptying it. A pad fell out, hitting the counter, along with a handful of unopened soda cans, one of which rolled and hit the floor, breaking and hissing.

T’turk stared at the contents of the bag, confused. “What’s all this trash?”

The stranger looked at the soda on the floor as it sprayed chaotically. “Mother fucker,” he muttered.

T’turk threw the empty bag down by his feet. “You better have something on you, human! I’ll rip you a new one right now. You know how many of your kind I’ve killed just this week? You’re all a bunch of mushy pieces of—”

“You killed humans?” interrupted the stranger, raising his brow.

“Over a dozen in four days!” bragged T’turk. “Ain’t that right, boys?”

His crew cheered. “We raided a ship on its way to Nexus Colony,” announced Fr’ling. “Killed half and saved the rest for later.”

The human let out a sigh. “All I wanted was a drink and some food, but you just had to go and bring that up like a fucking jackass.”

“What’s he saying, T’turk?” asked Fr’ling. “Tell him to speak up! It’s hard to hear humans. They’re too tiny.”

T’turk laughed. “He’s scared. He knows he’s about to die.”

The door to the Five Trees opened, and in walked another human. A woman, perhaps, but T’turk couldn’t be certain. They all looked the same to him, ugly and pathetic.

She took a seat at the bar beside the male, motioning to the barkeep. “Whiskey,” she requested, turning away from T’turk.

“You,” he said, puffing his chest at the female. “You’re interrupting us.”

T’turk was about to raise his fist to the woman, when the male got to his feet. “Let’s leave the lady out of it. This is between you and me.”

“Between us?” grinned T’turk. “Finally.”

The man turned to the female. “Hey, wanna do me a favor?”

“Just watch my drink while I take care of this idiot, would ya?” He slid his glass over to her. “I’m Eddie, by the way.”

“Whatever,” the female answered, still not bothering to look.

The human male turned back to face T’turk. “All right, then, big fella,” grinned the little man. “Let’s see what you can do.”