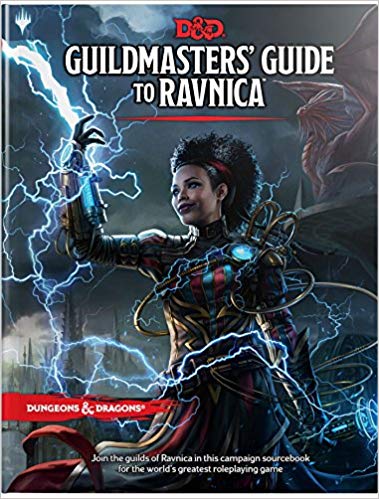 Starting in October of 2005, the world-spanning city of Ravnica has been a favorite setting for players of Magic: the Gathering, playing host to seven expansion sets: Ravnica: City of Guilds, Guildpact, Dissension, Return to Ravnica, Gatecrash, Dragon’s Maze, and Guilds of Ravnica, as well as the next two sets for the upcoming year, Ravnica Allegiance and a heretofore unnamed third set. With nearly two thousand cards based on Ravnica and it being the first not Dominaria world to be visited three times, it’s clearly a fan favorite, so it’s no wonder that the people at Wizards of the Coast wanted to bridge the gap between their two very popular brands, Magic: the Gathering and Dungeons and Dragons, in this sourcebook that allows players of the latter to explore the rich cityscape and unique setting in Guildmasters’ Guide to Ravnica.

First thing off the bat, this book is beautiful, it mixes art from the cards with new fresh art on its 256 pages. The cover features the most amazing piece of art, a black human woman, with natural hair, in the regalia of the super intelligent (sometimes too much for their own good) magical scientists of the Izzet League conducting an experiment before her guildmaster Niv-Mizzet, the firemind and dracogenius. As a person of color myself, it is so inspiring to see someone who looks like people in my family, like me, in a position of prominence when the world of tabletop gaming is still pretty white and male.

There is a plethora of new content for Dungeons and Dragons players on Ravnica, include new races, like the elephantine Loxodons and mutated Simic Hybrids, two new class options in the enchantment focused Order Domain cleric and necromantic Circle of Spores druid, as well as dozens of items and monster stat blocks. In the 5E rules, guild membership comes in the form of a background, rather than the standard urchin, soldier, or merchant. In that way, being a member of the Boros Legion comes with a suite of skills, equipment, connections to NPCs, and, a new feature, if you are some sort of spellcaster, you get new guild spells added to your spell list that you can choose from.

Even if you don’t much care about the connection to Magic, Dungeons and Dragons players I know have been yearning for another world to explore. Not everyone has the skill or time to create their own home-brewed setting, and when the only things Wizards of the Coast had to sell players of late seemed to be the same tired sword and sorcery Forgotten Realms setting, Guildmasters’ Guide to Ravnica can be a breath of fresh air. It also, in my opinion, meshes well with the other new sourcebook out there now, Wayfinder’s Guide to Eberron. You can not tell me that you look at that beautiful Izzet mage on the cover of Guildmasters’ and can’t see her as a House Cannith or Lyrandar member as well.

There are enough maps, background information, NPCs, and complex interactions to set any sort of story you want to tell in Ravnica, all with a different, more urban take than most Dungeons and Dragons usually handles. I myself, have never played in or ran a game for a group that didn’t get a few Magic players in the mix, sometimes getting some games in while everyone else got there. This would be a great thing for those people, who always wanted to either play out the storylines of the blocks or just wanted to have some fun on their favorite plane. But even if you’ve never played Magic before, there is enough new content in this book for anyone, player or Dungeon Master, to enjoy in your new game.

Guildmasters’ Guide to Ravnica, as well as it’s associated map pack and specialty dice set are available at your local game stores and booksellers on Tuesday, November 20th.