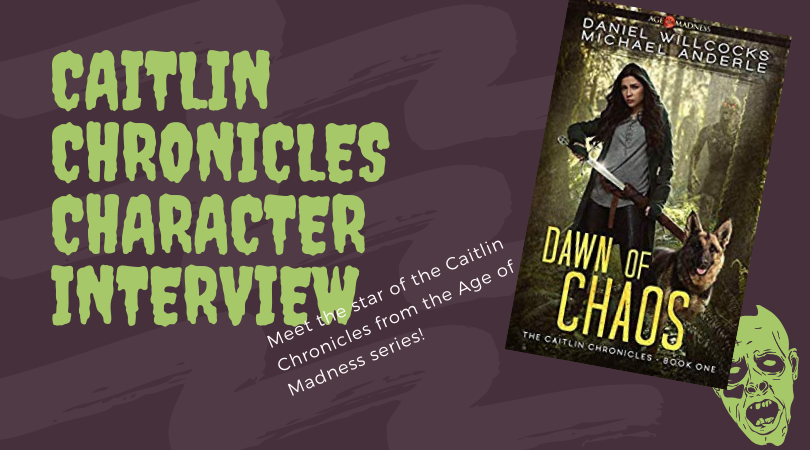 Have you ever wondered what Characters from different books thought about themselves, or their authors? We are doing a series of character interviews each month where we sit down with one of the main people in the stories you love. This week, I sat down with Caitlin Harrison from Dawn of Chaos, book 1 of the Caitlin Chronicles and part of the Age of Madness! The Age of Madness is a time in the Kurtherian Gambit Universe after the Worlds Worst Day, but before the Age of Magic. This was the time where the Earth had to deal with Kurtherian technology, magic, vampires, weres, and even zombies! This was the turning point before humans discovered they had magic.

HI Caitlin, welcome to the LMBPN chat room! Thank you for taking time out of your busy schedule of killing zombies and fighting against tyrannical vampires to let the fans know a little bit about yourself. Can you tell us something about yourself and help new readers get an idea of who you are?

Hi, my name is Caitlin Harrison – though I’m sure Kain would add that most call me ‘Kitty-Cat’… sigh… I grew up in a little woodland fortress in the ass-end of somewhere, called Silver Creek. I’m not exactly sure where that is in the larger world. Silver Creek was all that I ever knew until I discovered a crude map in the Governor’s quarters and went on my travels. You can find out about my journey in ‘The Caitlin Chronicles’.

Your series is four books long. How do you evolve during the course of the series?

The question is: how DON’T I! I always thought that Silver Creek would be it for me. That my life would be chores and watching the men head out from the gates and scout the world outside to keep the area clean of the Mad – shudder – but the Governor actually gives me a chance to join their ranks! Not that that works out too well, but it does mean that I got to meet two of my closest friends, a Were with an attitude by the name of Kain Sudeikis, and a vamp that’s as classy as they come, called Mary-Anne – no relation to the matriarch, apparently. Just a cute name given by her parents. After meeting these two I begin to unravel the Governor’s regime and am now on the search to find a cure for the Madness. If there even is one. I hope there is, I’ve lost too many people to that disease…

Do you have an enemy or nemesis? If so, tell us a little bit about them and how they ended up going against you, or you against them.

Oh, this one’s easy. Anyone who suppresses and controls people against their will. Anyone who thinks that they’re greater than people and uses their power for evil. The Governor, for example. A fat, slobbery prick who lied to the city about what’s truly beyond the fortified walls of Silver Creek. Who lied about the true nature of the vampire I was due to capture. Geralt, a giant Werebear who has taken control of the sewers of a city and plans on overthrowing the surviving humans on the surface. The list goes on. Basically, treat people kind. The world is f**ked up enough right now without humans, Weres and vamps making things worse.

What's your biggest challenge in this story?

I am only human. I don’t have any vampire speed or Were strength. I am just a human with a fire in her heart and a silver-tipped sword that I can wield unlike any other. I am one girl on a mission to unite the world once more and usher in the end of Madness, and that task itself is big enough to be a never-ending challenge.

Yes, you definitely have your hands full just trying to end the Madness. Thank you for doing this, by the way.

What's the one event that has helped to shape your personality?

I'm so sorry for your loss. Kiera sounds like she was the very best of friends.

Tell me, are you involved in a romance? Dish a little, I think with all of that action we could use something light-hearted.

Romance? Are you kidding? I’ve got a job to do here. Romance would only cloud my vision and send me off-course. I mean… there was that one time in the city… NO. *Shakes head*. My focus is on my mission.

Hmm, it sounds like there is a story to be told about a guy? Care to gossip a bit?

Alright, moving on … What is the one thing you want the most in the whole world?

A world united and the Madness gone. This terror has gone on long enough. It’s time that it ended. My crew have got the leads. We’re on the move. And if there’s one thing that I will do before I die, it’ll be to wipe the disinfected ass of this world until the Madness is gone and the world can once more be at peace.

WOW, remind me to stay away from the tip of your sword. I'm sure you will eventually find the cure and stop the Madness, with your determination you can do anything.

If you could say one thing to your author, what would it be?

Could you not have made Kain a bit more pleasant to be around? Seriously? I mean, I love the guy, but can you imagine how much easier this journey would be if he didn’t keep running off, doing his own thing, and winding everyone up that he comes across? Oh, and thanks for killing off my best friend. Dickwad!

Okay, moving on. Sounds like someone wasn't too happy about a major part of her character development.

What questions would you have liked me to ask?

What is my favourite flavor of ice-cream? Where do people poop in the world of the Madness? What star sign is Mary-Anne—I don’t know! I’ve got more important things to worry about. You know that we’ve just had sightings of more Mad coming over the hill right? It’s battle stations—go, go, GO!

Well, I'd like to thank Caitlin for joining me today. She just jumped up and ran out of the room. There must have been a sighting close by for her to react so quickly and without even saying goodbye or answering her own questions. Although, I must admit, one of those I really didn't need to know the answer to. Do they even have ice cream during the Age of Madness?

If you would like to start the series, head on over to Amazon where you can pick up your copy of Dawn of Chaos and start the series today. It's also included in Kindle Unlimited. 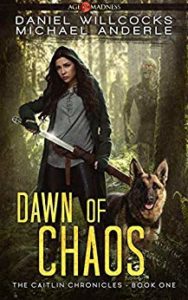 **Reading the original Kurtherian Gambit series isn't required to enjoy the Caitlin Chronicles. However, most do end up going back and reading all 21 books once they've finished this 4 book series!**

Jen Hendricks is a USA Today Bestselling author under the pen name, J.L. Hendricks. She writes YA Speculative Fiction and you can find her books on Amazon. Her current project is a YA Sci-Fi action adventure series, Worlds Away.