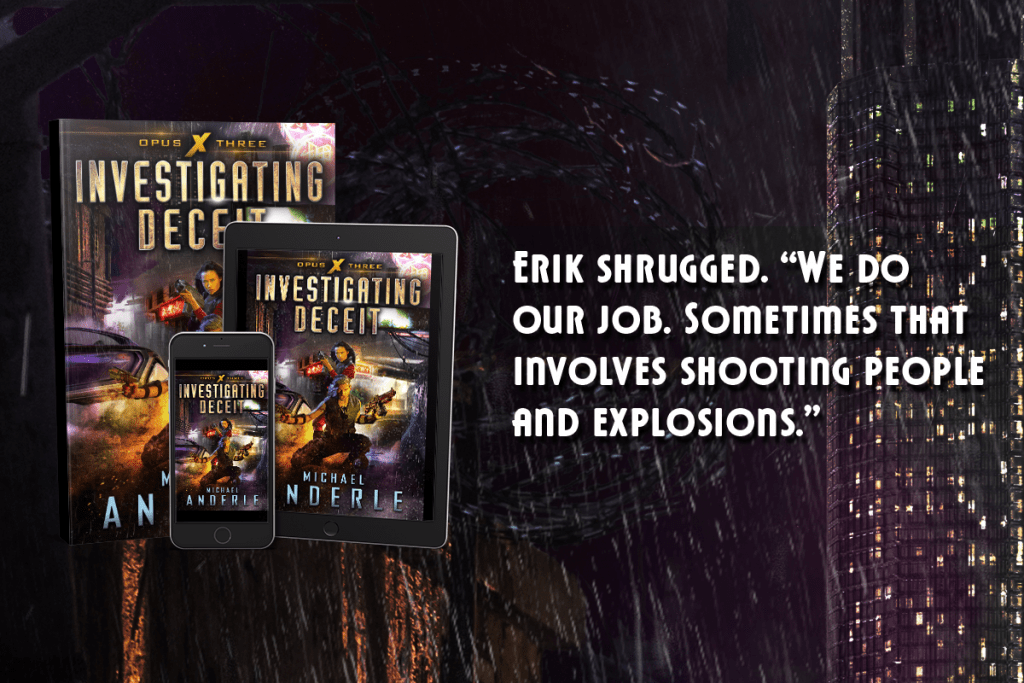 Yes! I've just read the second snippet for Investigating Deceit and I can't wait for it to launch! I've already pre-ordered my copy because I want to listen to it the moment the audio version is released!

Get ready for a ride only Erik and Jia can deliver!

Erik inclined his head toward her, his own rifle coming up and pointing at the man’s face. “You heard the woman.”

Sometimes Emma added decent programming to the simulated enemies and allies, and sometimes they were nothing more than emotionless robots. She hadn’t specified at the beginning of the current scenario.

“You fools stand no chance,” the man replied. “I’m going to leave with this man. If you make any quick moves, he dies.” The jerk had a self-satisfied smirk real enough that Eric wanted to slap it off his face. “Then where does that leave you?”

Erik appreciated that touch. Decades might have hardened him, but it was important for Jia to develop a thick enough skin to focus on the criminal in a situation like this. It was far too easy to get distracted and end up with a dead hostage and a dead rescuer.

Rescuers didn’t always have time to soothe the victim, and a little fear was preferable to a hole in the head.

“You’re going to escape with a hostage through a forest?” Jia snorted. “I find that highly unlikely. Give it up. At least you’ll live to stand trial.”

The man shifted his hand, which was a mistake. The barrel now pointed away from the hostage’s head, and Erik squeezed off two shots. The first ripped through the hand holding the pistol, the second through the man’s forehead. He fell back, his pistol sliding across the floor.

The building vanished, replaced by the silver-floored white room of the training center.

“Congratulations,” Emma offered over the PNIU. “You’ve completed the scenario. I was hoping you’d get cocky and forget to take out all the roaming guards, but the hostage is alive, and there’s no one left to chase you. That’s why it ended. No point in making you walk the hostage to the evac zone.”

“You weren’t going to add new guards along the way?” Jia asked.

“No. I define the scenarios beforehand, even if I don’t tell you all the details. It’s far too tempting to cheat otherwise. I’m sure I could flood any given battlefield with a thousand men and you’d lose, but it wouldn’t prove anything. It’s not impossible, after all, for you to lose.” Emma chuckled. “Setting that aside, don’t you think your final shots were rather risky, Detective Blackwell?”

Erik shrugged. “I’m here to train for the real world, and in the real world, there’s no way I’d let a terrorist leave with a gun to the head of a hostage. The minute he got out of sight, he’d put a bullet in the hostage’s brain and run into the forest. That isn’t even a situation where I could have been happy I wasted a few terrorists along the way. Bad training leads to bad results. That scenario called for lead therapy, and I was happy to supply it.”

“I suppose,” Emma murmured. “But if your timing had been off, you would have failed.”

“Luckily, my timing wasn’t off.”

“And what about you, Detective Lin?” Emma asked. “Didn’t you find that move questionable?”

“I agree with Erik,” Jia offered. She blinked a few times. “I agree,” she murmured again, this time more softly.

“Problem?” Erik studied her. “You think I shouldn’t have taken the shot?”

“No, it’s not that. It’s not you at all. It’s just…” She bit her lower lip before looking at him. “I think I’m getting bloodthirsty.”

He eyed her, one eyebrow raised.

She continued, “I know we didn’t have the stun pistol option in this scenario, and these men weren’t real, but I didn’t think anything of it.” She stared into the distance. “I’m not saying that’s an awful thing in this kind of situation, but I do wonder about the future.”

“You can’t resolve every situation without lethal force.” Erik’s expression darkened. “And the kind of men who take hostages or threaten innocent people have no one to blame but themselves should they end up dead. If we had held back against any of the terrorists or criminals we’ve dealt with in the last few months, a lot more innocent people would be dead. We might be dead.”

“I know. I know.” Jia sighed and gave a slight shrug. “It’s like you said. I’ve come a long way, and I don’t always think about the implications. And my adrenaline is pumping too much after a real showdown for me to always think about what’s happened.” She waved around the room. “This is good training, but I never completely forget it’s not real, either. If that makes sense.”

“Perhaps you missed your calling,” Emma interjected. “Maybe instead of a detective, you should be a tactical terror with the TPST.”

“The same logic applies to that as to me joining the Army to become infantry.” Jia shook her head. “Being able to take down bad guys is all well and good, but it’s not why I joined the force. It’s like I said before. Cleaning up Neo SoCal needs investigation more than gunplay.”

“So you say,” Emma responded, mockery underlying her tone.

Erik nodded. “We get more done as detectives anyway.”

Her eyes shifted to the side as she looked at something on her smart lenses. “A personal alarm. I lost track of time. I’ve got a date with Corbin in less than an hour.”

Erik snickered. “And how is the down-to-earth businessman doing these days?”

Jia rolled her eyes. “I like the symphony.” She stopped and spun toward Erik, her eyes narrowed as she pointed at him. “And don’t think I’ve forgotten.”

“Forgotten what?” Erik grinned. “You can’t force me to like the symphony.”

“This has nothing to do with the symphony. Not directly, anyway.” Jia stabbed her finger at him. “I’m talking about our bet for December. I have clearly had more dates than you in one month. Not that it was hard, given that any positive number is greater than zero. I don’t even know why you took the bet if you weren’t going to try. My victory isn’t as satisfying that way.”

“I meant to try.” Erik stopped scratching his cheek and started scratching the back of his head, a blush coloring his face. “I’ve, ah, I’ve been busy.”

Hmmm, I wonder what this bet entails? What does the winner get? I guess I'll find out when Investigating Deceit launches on January 24th! 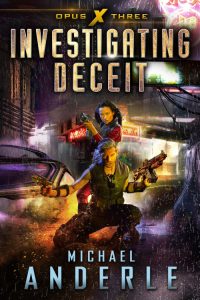