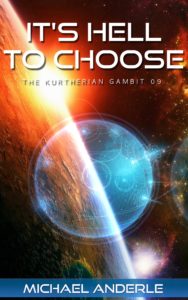 “Are you telling me,” a gruff voice shouted from the phone, “that we have unexplainable tech that can lift stuff up to the moon and God only knows what else and you brains over in R&D can’t even tell me HOW!”

The five men flinched when they heard the slam of a hand on a desk erupted from the conference room speaker.

He continued berating them, “I just had an awful, no let me change that, a scathing conversation with a senior Senator in charge of military appropriations. It becomes a pretty one-sided conversation when the CEO of a company the size of ours is not only caught unawares of new technology, our radar emplacements, and security satellites can’t even spot the son-of-a-bitches!”

“But sir!” Jeo Deteusche spoke out, “How are we supposed to detect a revolutionary new drive system and or even spot these containers when they have a coating on them that reduces their radar signature to something the size…”  Jeo had been ignoring his bosses vigorous head shaking.  Having been with the company for a little over a year, Jeo was fed up with the politics, the bullshit R & D priorities and the snide comments from people who had been ‘in’ the system for over a decade.

This company, he had decided, wasn’t about protecting his country.  It was about fleecing the people of the country of their money in taxes to keep the conglomerate going.  They used the constant threat of the Russians or the Chinese coming up with new technology to maintain the budget money coming in hand over fist.

Jeo could imagine what the pissing match had been when the Senator had figured out that despite the ludicrous amount of funding, their tech was officially second-class.

By a large margin.

Jeo had been sitting in this room with these other four scientists for the last half an hour and had been fuming.  He hadn’t wanted to go into defense in the first place, but R & D positions like what he enjoyed doing with advanced metals and theoretical metal production in low gravity weren't something that enticed too many companies.

So, he had few job options coming out of one of the highest rated engineering universities.  He could have stayed in and moved up the Professorial track, but he wanted to apply the technology.  Not just develop the concepts and sell off the licensing and move on.

He wanted to be a part of a team that was building the next stage of space exploration.

Two minutes ago, before he started what he knew would be his last conversation as an employee of this company, he placed a small little phrase on his Twitter account.  One that wasn’t directly connected to him, so he had no idea how they had figured it out.

He shrugged mentally; it wasn’t his to wonder why, but just type out the twelve characters and then start the last ‘hoorah!’ he would accomplish as a member of the R & D team.  He looked at his social account and smiled at the little phrase.  It only said: