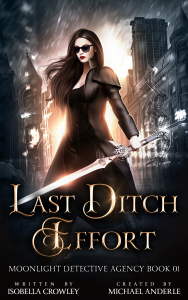 Here's your first look at the latest series from Michael Anderle and Isobella Crowley!

Tabitha always gets to share the secrets with everyone, but this time I think I have actually beat her to the punch! Yes!!!! Take that, Tabitha!

Okay, enough about my jealousy over Tabitha. I'll bet you're here because you want a sneaky peek at this new book, right? Last Ditch Effort is a brand new collaboration between Isobella Crowley and Michael Anderle, one I'm very excited to read! This book is scheduled to release on Tuesday, September 17, 2019, but please be patient with LMBPN as sometimes it's tough to get a book to go live on the correct date.

Without further ado, here's the first of 3 snippets I'll be releasing before Last Ditch Effort goes live next week!

In a dark and cavernous space, ancient stone ground heavily against stone and the scraping rasp echoed with mock finality. The lids of coffins, particularly those crafted in distant times, were not made to be opened and closed more than once.

Soon, the noise ceased and silence returned. The coffin was again still, its covering perfectly aligned with its body.

Those with sight that could penetrate the darkness would have seen a beautiful coffin, whose crisp, elaborate carvings had softened very little despite the long span of time since the ancient artists had shaped the stone.

It was an old, ornate house, which had been there almost as long as New York City had been independent of the Crown. The great metropolis was not far. But there, in the far and wooded outskirts, one could easily forget the city’s proximity or even its existence. The venerable trees were both tall and dense. Dawn was delayed by their grasping arms that blocked out most of New York’s light and noise and activity, just as they blocked the sun when first it began to peek over the horizon.

But each day, the sunlight crept in and filled the sky beyond with blazing light. And although the coffin’s inhabitant would have no way of knowing, it promised to be a beautiful day.

Seriously, I want to know who's in that coffin! Hehehe

Come back to this website on Saturday and Monday to get the next snippets! Then on Tuesday to find the link once it's live.

I know I can't wait!