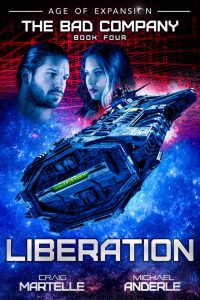 “My name is Rivka Anoa, and I’ll be working with you on your franchise contract for All Guns Blazing. Do you have any questions before we start?”

“We’d like to see the All Guns Blazing before anything else. Are you old enough to go in there? You look pretty young,” Terry said.

“So do you,” Rivka deftly replied. She was shorter than Char by half a head, with blond hair and hazel eyes offset by swarthy skin. “I’m twenty-five, I’ll have you know.”

“I’m not twenty-five, and I’d like to see what I’m going to spend Nathan’s money on,” Char said.

“What are you, thirty-five? That’s not that big of a difference.”

“I think I’ll be…” Terry stopped and started counting, ticking off his fingers as he went. “Round it up to one ninety. You know what that means! Somebody is going to hit the big two oh oh this year.”

“Why?” Char rolled her eyes and groaned. “Why did you have to bring that up?”

“Because I need to throw you a surprise party,” Terry said nonchalantly.

Char turned to Rivka. “Which way to the bar? I could use a drink.”

“Follow me, please.” She winked at Char before shielding her mouth from Terry Henry. “I can get a wheelchair for the old guy, if you’d like. I know you’re not a year over twenty-nine. You look magnificent! I love your eyes.”

Char loved the infectious exuberance of youth. “Lead on, Queen’s Barrister. Wherever you go, we shall follow, as long as you’re going to All Guns Blazing. If you’re not, we’ll find our own way.”

They took an elevator to the promenade level where Rivka held the doors for them to exit.

“This looks the same,” Char said.

“All Guns Blazing is a brand new addition to Onyx Station. One of the signature elements is the seven by twenty meter window looking into space. It is made using proprietary technology that will be part of the contract. The beer vats and brewing system must be purchased through The Bad Company. There is no proprietary technology there, it’s just beer, but the style of vats is unique and trademarked by AGB Enterprises.”

“Stop right there, barrister.” Terry crossed his arms, puffed up his chest, and pushed out his biceps. “It’s never just beer. There’s an AGB Enterprises?”

“Of course. That’s who owns the franchise rights and who you’ll have the honor of paying a straight twenty percent of your revenue, not profit, and who you’ll also have the pleasure of buying your stock materials from. It’s all in the contract.”

Terry deflated. “Is there any room for negotiation?”

“None, but I will remain your representative for as long as the contract remains in force.”

“What if you kill somebody and can’t be a lawyer anymore?”

“That is a most bizarre question. Although barristers are often able to mete out justice under the Yollin Accord, we don’t kill people. Should I be unable to continue my duties, for whatever reason, you will be provided comparable counsel from the firm. It’s in the contract.”

“We mete out some justice, too,” Terry started, “but I expect it’s a little different from what you do.”

“I’ve heard about what you do. I’m not sure I’d be bragging about it.”

“Assassins. You remove people the Federation perceives as a threat to their power. You come in the dark of night. I’ll tell you what, buddy, my door is locked and I can defend myself!” She pointed a finger at the two.

Terry and Char both stepped back and looked at each other in confusion. “That’s not what we do. We’ve had exactly three missions so far. We ended a civil war on Poddern; we broke a blockade at Alchon Prime; and we closed an interdimensional rift and eliminated the Skrima, a race of demon-like aliens who had come through it.

“I am still new at this, but there are rumors about you and your Direct Action Branch. They’re not pretty.”

“What the hell?” Terry turned to Char. She shrugged and turned her head. “Is Nathan fu… messing with us?”

“I hope not,” Char declared before her expression softened. “You look like you could use a beer.”

Terry’s ears perked up. “Could I ever. A nice and dark one. Cold. Big, and then another one that looks just like it.”

“I think you’re going to like All Guns Blazing. It’s the most popular place on Onyx Station.” They turned a corner and Rivka waved her hands as if making the bar magically appear.

There was a fight ongoing at the entrance. Rivka held her hand up, signaling for them to stop.

“Wait a minute,” Char said. She and Terry pushed past the barrister and ran for the entrance. Half the Bad Company warriors who had arrived with Terry and Char were inside the bar, playing a drinking game. The other half were already drunk and trying to get in. The bouncers were having none of it.

Terry grabbed the closest warrior and hauled him backward. The man tried to throw a haymaker as he swung around. TH dodged it and slammed the man on his face. Char rabbit-punched the next man. Terry kicked the third in the back of the knee. When the man started to stumble, Terry punched him in the top of his head.

The fight ended quickly after that. The bouncers were unscathed, standing with their arms crossed, watching Terry and Char with wary eyes.

“Form up, you knotheads,” Terry growled at them. Six men and three women. All drunk and bruised. “You lasted a grand total of thirty minutes. That’s not a record, so, while you’re confined to the War Axe, be comfortable in your knowledge that there are people in this universe who are stupider than you. How in the hell did you get drunk in thirty minutes?”

“A killer drink in one of the sub-level bars. The Supernova Hellspawn something or other,” one of them mumbled.

“Get back to the War Axe. I will have Smedley track you and if any of you geniuses get lost, you won’t be confined to the ship, you’ll be in the brig, don’t pass go, don’t collect two hundred dollars, and don’t ever enjoy one minute of liberty for the rest of your natural born days.”

The group looked contrite until one of the women started puking. She remained at attention throughout the affair, leaving a splatter on the deck before her and a trail down the front of her shirt. The others started to giggle.

“You had best get back to the ship, Right. Now.” Terry waved at them angrily. They turned and started to run, but they had turned in different directions. Two fell down, while all avoided the spew. They helped each other up, decided on a way to go and dashed away.

“Isn’t the hangar deck the other way?” Char asked.

Rivka stood to the side, covering her face with her hand to avoid the smell. Terry grinned at her. “Not our finest moment, counselor. If you wondered about any night sneaking by steely-eyed ghosts, what you saw here today should put those rumors to rest. And you’re probably thinking that we can’t fight our way out of a wet paper bag. To the untrained eye, it may seem that way, but these people have been in combat for a long time. They’re blowing off steam. That’s all.”

Continuing to cover her face while turning her body so she didn’t have to look at the mess by Terry and Char, Rivka asked, “Maybe you can teach me a move or two? That was pretty good how you disarmed three of them in three seconds.”

“But they weren’t armed,” Terry countered.

“You know what I mean,” she huffed. She nodded to the bouncers who waved them in. “After you.”

Terry opted for seats at the bar, with his back to the window. He would look at space later. He needed to see the bar and understand the potential.

Rivka waited patiently as he inspected everything he could see, methodically looking from one point of the bar to the next.

“He’s memorizing all of it.”

“I’ll transmit a complete portfolio of pictures. They come with the franchisee license.”

“Sure, but he already has the whole bar committed to his eidetic memory. After one hundred and ninety years, you’d think his brain would be full, but it’s not. Maybe when he gets to be my age…”

“I heard that,” Terry said. “Nothing you can say will get a rise out of me, not while I’m here with this in hand.”

The bartender handed over a perfectly-pulled pint, so dark, no light passed through the glass. Terry looked at it as if he were in love. He closed his eyes as he sipped it, keeping the glass close while he licked his lips and took another long, slow drink.

“I many never swear again,” Terry suggested after he finished the beer and called for a second.

“Bullshit!” Char declared. “Once the bar is up and running, you’ll be your old self. If you’re going to drink the profits, I’ll cut you off!”