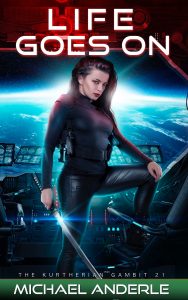 The massive Leviathan-class superdreadnought hung in space, slowly moving through the black depths above the planet. Silent, but not immobile.

Well over seven thousand times a second, the AI updated the attack plans should her Empress need to call on the abilities of the warships to rain fire on the planet below.

It was intended to be a peaceful visit, ArchAngel knew, but she developed contingencies as she eavesdropped on the communications.

She was always prepared.

“This information has been confirmed,” the news reporter said into his microphone as he looked at the drone camera. “The two massive Etheric Empire warships above our planet are here on a planned visit, bringing Empress Bethany Anne to speak with our political leaders.”

He turned to his right, his four mandibles signaling that he was just a touch uncomfortable.

He had heard the rumors of the Empress’ incandescent rage over the new Federation efforts, especially the many requirements they were trying to place on her people.

And for what it was worth, he sympathized.

However, he could also sympathize with the other polities, as well as the Ixtali. The Empire itself was too powerful to create even a semblance of equality among the proposed Federation’s members, so the negotiations were rather rough with those in the Empire itself—including the most divisive issue, which he was sure would set the Empress off.

They wanted her to step down.

Bethany Anne put a hand to her forehead and closed her eyes. “Just shoot me now, and let me leave this fucking job already!” she murmured. Opening her eyes, she looked at herself, or rather, the visage of the AI ArchAngel on the screen in front of her, and asked, “Are you sure?”

“Yes,” she responded. “Two different groups are working to break up the meeting, either while or after you speak with the Ixtali council.”

Bethany Anne made a face and glanced at John, who merely shrugged his shoulders and smiled back at her.

“We have a call from a private line,” ArchAngel informed Bethany Anne, who raised her right eyebrow. “From Legate Addix,” ArchAngel qualified.

“Well, that tears it.” Bethany Anne turned and started toward her weapons closet. “This will be an armored visit.”

The AI opened the door before she got to the room. As she stepped inside she said, “This is Bethany Anne.”

The Ixtali’s voice came from the speakers. “Empress, I apologize for going outside normal protocols, but there are a few issues here you might want to be aware of before you come down.”

“Speak to me, Addix,” Bethany Anne replied as she opened drawers. She turned and pointed to John and then to a new set of drawers she’d had installed.

She turned back to her search, so she didn’t notice the unasked question on John’s face as he started opening the drawers.

“Oh,” he murmured as he pulled out a couple knives. “Someone has been shopping at the blades and cutlery store and not sharing the spoils,” he whispered as he selected two for himself.

When he turned around Bethany Anne was naked, about to pull up her under-armor suit. He quickly turned back, raising his eyes to the ceiling as he shook his head.

Damn that woman! “What happens on the mission stays on the mission,” he subvocalized, listening to her dress behind him. She had been tweaking him since way back in Florida.

He’d complained to his wife Jean about it a few decades ago, but she just patted him on the cheek with a knowing smile on her face.

He’d had no clue what Jean had meant by that, and that had made the response scarier than it should have been.

When he heard the expected zipper closing, he turned around. She was putting on a skin-tight suit that did little to hide much, but changed her skin color from white to a Lycra-looking black.

He rolled his eyes. At least he wasn’t staring at Baba Yaga.

Does this make me look fat? she sent straight into his mind as she carried on the conversation with the Senior Legate. He glanced around the room to confirm nothing seemed amiss, and then headed out of her arms locker.

Well, it was much more than an arms locker, really.

You might have gained a pound, he sent back, chuckling under his breath as he imagined her eyes trying to burn a hole through the back of his head. He smirked. She would be trying to figure out where that pound was for a week.

“ArchAngel?” John called over his own link to the AI.

“Yes, John?” He could hear her through the bone conduction speakers in his head.

“Please close the arms locker door,” he commanded, and the door behind him immediately started closing as he took up a protective position outside.

He smirked. “I don’t want to hear her bitch about weight gain after the call with the Senior Legate.”

Bethany Anne stared at the broad back of her friend as he stepped out.

If only she had laser eyes!

“Bastard!” Bethany Anne murmured. John took up a protective position with his back to her as the door to her room closed.

“I’m sorry?” the Senior Legate replied over the speakers in her suite. “I don’t think I know that word.”

Bethany Anne rolled her eyes as her focus snapped back to her call. “I have to apologize.” She turned and opened the drawers where her latest armor setup was stored. “It was a personal comment,” she admitted as she pulled out the core chest and back protection. “Who will need their ass kicked, and why?”

>>> FROM MICHAEL — Have you ever had a work hangover? You know, the kind when you get done, you still continue working, but you are kinda in a daze?

Yeah, that's me at the moment.

Because, why the hell not?

I mean, It's not like I didn't use Christmas (twice), why not use Valentines Day for the reunion of the lovers?

Because, you can't keep a good man (or woman) down.

They WILL find each other.

What happens next might not not be pretty, but it will be amazing.

It just took 25 books and over a hundred and fifty years. For whale readers, they are looking at me like, “And? So? It's twenty-five books… Your point?” and hell yeah! to everyone who has kept with it this long. You are some crazy sonsabitches and I appreciate the HELL out of you.

But, I hope you enjoy these two books, because sometimes…

Love comes back from the Grave.