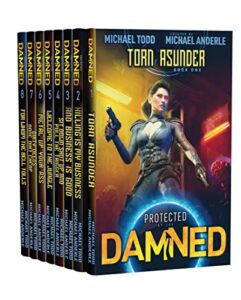 Katie Maddison never wanted to learn how to kick a demon's ass, all she was doing was helping a fellow university student with his Chem homework.

She just trusted people too much. Now, she will be the new weapon in a war she had no idea existed with warriors wielding both weapons and supernatural abilities. Demon Hunters, Demon Fighters … Known as The Damned.

One of the most powerful Demon's in Hell can't defeat his sister, so he sets her up to be sacrificed and killed. The only problem? The human she possesses retained her sanity and together they might be a catalyst to change the future of the war. 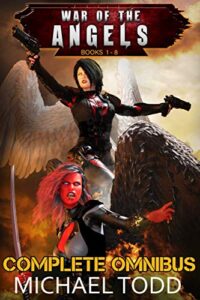 Katie has decided that too many people are trying to play with power instead of doing what is right.

From Book 1 A Sacred Pact: Does she bite off more than she can chew when she makes a statement that upsets the World Council? Even the general is at a loss. However, with Pandora on her side, who is going to win if they argue with them? Whether it is possible or not, plenty try. How much of what Katie does is due to her recent heartache?

In the end, the enemy steps up their efforts to bring down these sisters in heart and deed. Do they finally have the answer? 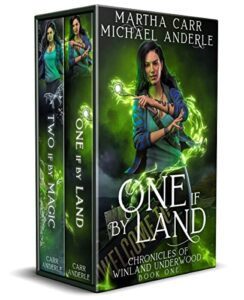 Can she protect the magical refugees while searching for her mother? What other challenges await the Fixer’s daughter?

From Book 1, One If By Land: The half Light Elf and half Witch has led a band of magical refugees to the Ozarks where they can finally put down roots. But what darkness hides underneath the scenic mountain views? Will the legacy of the Fixer help her out? An ancient mystery starts to unravel threatening their new town, and Winland must find it in herself to stay and fight it out. 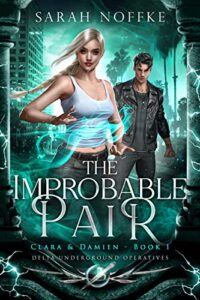 Blood-sucking vampires and vegan psychics don’t mix. But to save the world from a magic-stealing madman, they’re going to have to. The Delta Underground Operatives, humanity’s last line of defense against evil threats, only enlist the brightest and the best. Clara and Damien fit the bill. So when a threat like no other can only be stopped by a perfect assassin team, the organization recruits these two unlikely vigilantes with complementary skill sets. Too bad they can’t stand each other. He’s dangerous. She’s peaceful. He’s loud. She’s meditative. They don’t see eye to eye, but they’ll have to fight side by side. As their target hunts the innocent and threatens to destroy the delicate balance of magic, everything rests on the duo’s ability to work together. Clara wants peace. Damien wants vengeance. Only they can take down evil. But first, they’ll have to learn to get along…. 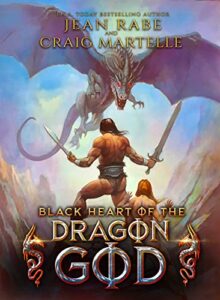 Black Heart of the Dragon God:

Capturing dragons is all in a day’s work. The Barber is a reformed pirate. He’s built a town but wants more. Enter Goranth the Mighty, a hero from a different age, a Northman, and a warrior like no other. With nothing less than a dragon as their goal, the adventurers head into the wild. Hope springs when they find a small one, but there is a monumental difference between wanting a dragon and having one. Raiders seek to steal what the Barber has fought for. An ancient creature rises from within the earth to punish humanity, and a beautiful enchantress fights to stop her. Goranth draws trouble like moths to the flame. A dragon. A necromancer. An enchantress. A woman from the underworld, and raiders, thick as thieves.

Goranth unsheathes his sword and wades into battle. He knows no other way to live. 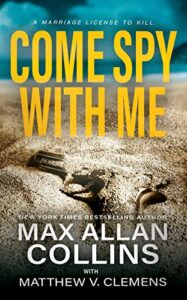 Come Spy With Me:

Secret Agent John Sand was the world’s greatest spy, then he decided to call it quits. Settling into quiet mornings and lovely dinners, Sand finally found peace. But as Sand is adjusting to a life free of espionage, the CIA calls in an unexpected favor. JFK needs Sand for a final mission: one he might not survive. Deadly assassins are targeting Cuba’s president, and his own people might be in on the attempt. If El Presidenté dies, World War III is imminent . . .

The unexpected jolt to Sand’s senses pulls him back into a world full of secret intelligence, where Sand is on board for the most dangerous mission of his life. The enemies are deadlier. The stakes higher. The threats more complex.

Is John Sand ready to face these enemies, or will the once great spy be brought to the verge of his physical abilities with each passing test? 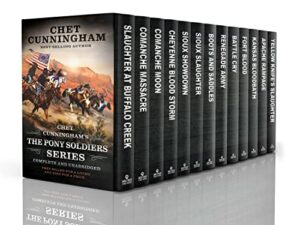 Captain Colt Harding, grief-stricken and hungry for revenge, sets out to destroy White Eagle, the Indian who killed his wife and son. White Eagle roams the land raping, pillaging, and murdering, showing no mercy.

Captain Harding takes it upon himself to see that this savage be fed to the scavengers. Only with the help of Pony Soldiers, some of the vilest people in existence, will Captain Harding be able to avenge the deaths of his wife and son and rescue his daughter from a life of servitude.

If you see this message after January 25th, 2023, and want to be notified of future price promotions, please sign up for our newsletter at www.lmbpn.com/email.