NETFLIX AND CHILL(Y): The Chilling Adventures of Sabrina

Who else is eagerly awaiting the Netflix revamp of Sabrina? *raises hand. * Get ready to put on your best black lipstick and resting bitch face because this is so not your 90’s version of Sabrina the Teenage Witch.

Roberto Aguirre-Sacasa, creator of Sabrina “2.0”, has another idea in mind. The era of comedic sitcoms is coming to a show-stopping halt with Sabrina. The show plans on returning to the small screen with wickedly delightful Kiernan Shipka as the titular teenage witch and the adorable Ross Lynch playing Harvey Finkle. 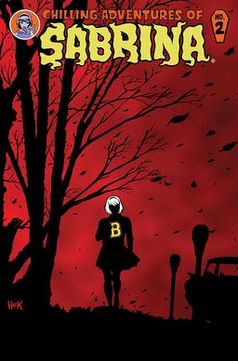 As we all know, reboots are all the rage these days. That being said, it comes as no surprise that producers would want to bring Sabrina back to life, considering the popularity of the CW’s “Riverdale”, which falls in the same universe as the latter. It seems like the Archie Comics universe plans on giving the teenage witch a hellish new style. Think 60s or 70s horror movies like Rosemary’s Baby, or Carrie for instance. Rather than the fun, lighthearted adventures of the original, The Chilling Adventures of Sabrina promises to be darker and far more sinister.

The chilling comics first premiered in 2014 by Archie Horror, a brand of Archie Comics. The reboot revolves around her dealing with all the supernatural occurrences surrounding her, and just trying to be a normal teen, because technically, aren't we all teen witches on the inside?! Yet, fans can’t help but eagerly wonder: will Sabrina sign a contract with Satan to become a full-blown witch on her 16th birthday and embark on the Path of Night? Or will she stay loyal to her mortal friends (and cute boyfriend!) and remain on the Path of Light? The suspense is chilling me!

One question on everyone’s mind remains…where is Salem?! According to Aguirre-Sacasa, it appears Sabrina’s familiar won't be making many appearances due to Shipka being allergic to cat dander. There's also talk that since the show has a spookier vibe to it, there wasn't much momentum to add Salem and his snarky, charismatic banter.

Take a look for yourself. But be warned: this chilling new take on Sabrina is not for the faint of heart.

One thing for sure: this show is a must see! Even the trailer has you wanting more. October 26th can't get here soon enough!

The Chilling Adventures of Sabrina premieres October 26 on Netflix.