How does the old saying go? One door closes another door opens. Let's hope that is the case for Michael as he begins a new life in the mean streets of Milwaukee

It’s all kinds of fucked up. You crawl out of bed to go to work when everyone else is fast asleep except the drunks, hypes, drug dealers, and hookers. Every now and then, you stumble upon a real victim, someone who is in the wrong place at the wrong time.

Midnight to eight in the morning, if you’re lucky and don’t catch a bag of shit toward the end of your tour. If that happens, you’ll be working long into the day.

You are society’s dysfunctional, door-kicking bulwarks, standing guard over the mud pits of our city, watching out for whatever crawls up.

And your coworkers? A lot of them are men and women in their early twenties, just graduated from college and looking for a job in law enforcement in the big city. Some are coming from the military, looking to find a home with the police department. Sometimes they find it, and sometimes it goes horribly wrong.

They all want to make a difference. You can guess how that goes. Oftentimes they wind up offended, disillusioned, and frustrated trying to do the right thing.

Not all of them are politically correct. Sometimes they are forced to fight for their or others' lives. But they are the thin blue line between society’s success and failure.

Unfortunately for the bad guys, they are incorruptible.

A Courtroom in Louisiana

The judge was a black man in his late fifties with crisp black robes, sporting salt-and-pepper hair and a mustache. His reading glasses were perched on the end of his nose as he read the file in front of him, shaking his head like he couldn’t believe what he was reading. He’d never had a case like this one, that was for sure.

He looked up from his papers and scanned the room, panning down to the two tables directly in front of him. To the left sat Michael Collins, the defendant in this divorce proceeding.

You could see Michael’s military background without being told. Clean-shaven, buzz-cut hair. Stoic expression on his face. He sat next to his attorney, wearing a modest suit. The judge was hoping to get some sense of what this man was all about, but you couldn’t tell anything about him from looking at him other than the fact that he’d served in the military. Maybe that was all you needed to know.

As for the attorney, he was a white male in his early fifties, with short hair but not as short as his client’s, clean-shaven, and wearing a blue business suit. Nothing out of the ordinary except for one little detail. This one actually seemed to care about his client, not just making a quick buck.

To his right sat the plaintiff, Michael’s soon-to-be ex-wife Patricia. Attractive, slender, with shoulder-length dirty blonde hair and modest makeup, wearing a plain gray knee-length dress. Unlike her husband, who had his poker face on, she was obviously struggling with intense emotions. The judge didn’t know whether this was more about their divorce or the tragic death of their only child. Most likely, it was both.

Her attorney was the only one here who broke the mold a little. Platinum blonde hair, perfect makeup, and a navy-blue suit that combined professional with a hint of sexy. The judge happened to know that she was a former Russian chess champion, which meant she had a first-rate strategic mind. Not that she’d needed it for this particular case.

When the judge finally spoke, his voice had a hint of Southern drawl. “This has to be one of the saddest cases I’ve had to preside over in all my years on the bench. I have heard the testimony from both sides, and I have to ask you, Mr. Collins…”

Here he took off his reading glasses, as if for effect. “Do you really want to give up all of your assets and pay alimony to this woman, even though you were only legally married for two years?”

Collins stood at attention, but the judge waved his hand at him to tell him to sit down.

He complied immediately, as you’d expect from an ex-soldier. “Yes, your honor, all I want is my motorcycle and truck. She can have everything else.”

The judge wasn’t ready to accept it yet. The judgment he was being asked to make was so unusual that he strongly suspected there’d be second thoughts later. “Young man, you have a sizable savings account. You also have quite a bit of equity in your home. That is a lot of money to give up. Are you absolutely sure?”

The judge turned to Collins’s attorney. “Did you explain the situation to your client? Does he know what he is entitled to and what he is giving up?”

The attorney didn’t seem thrilled with this case either, but his job was to do what his client wanted. If his client had wanted him to fight this case, he would have fought it aggressively, but that wasn’t what his client had asked him to do. “Yes, your honor. This young man wants to move on with his life and start the healing process after this terrible tragedy.”

Patricia Collins began sobbing quietly. Her attorney reached over and put a hand on her shoulder to comfort her. None of this was surprising. The woman had lost everything, and all she had left to show for her marriage was a bunch of material possessions.

The judge shook his head and continued in a loud voice. “This matter is closed. I’m very sorry for the tragic death of your child.” He peered at Collins, then his soon-to-be ex, before returning his gaze to Collins once again. “And thank you, Michael Collins, for your service to this great nation.”

The gavel pounded two times to make the judgment official. Patricia jumped a little at each strike of the gavel. Michael did not.

The attorneys shook hands and ushered Michael and Patricia into a small conference room to sign some papers and go over the logistics of transferring various items of property. Throughout the process, Patricia couldn’t bring herself to look at Michael. She stared down at the table as much as she could, trying to control her tears.

When it was finally done, Michael’s attorney pushed his chair back from the table. “Let’s go, Michael.”

Michael stood without a word and followed his attorney toward the door. With his hand on the doorknob, he looked back at his ex-wife one last time. “Have a good life, Patricia. I’m sorry it ended this way.”

She didn’t say anything. When he got to the hallway, Michael turned to his attorney. “So, that’s it, then.”

“Yeah, that’s it. And it went a lot easier than most divorce proceedings, if only because you didn’t fight her on anything.”

Michael shrugged. “That’s just how I wanted it.”

His attorney nodded. “So, what now, Michael?”

“Now I start over. I took a job in Milwaukee as a police officer. I start the Academy in one week.”

“Police officer, huh? Well, that’s a solid career. What are you planning to do with your last week in town?”

“Nothing much. I have a few old friends to say goodbye to. A few errands to get done. Basically, I just have to get my shit squared away here.”

The attorney stuck his hand out for Michael to shake. “Best of luck to you, Michael. And if you ever need anything, just let me know.”

Collins nodded. “I will. Thank you for all your help. This has been a rough year, but now it’s time to start the next chapter in my life.”

The attorney gave him a sympathetic look but didn’t say anything else. There wasn’t anything else to say. This man had lost his kid, his wife, his home, and his whole future. Now he had to make a new future for himself however he could.

As Michael Collins walked away toward the elevator, the attorney quietly whispered his final blessing.

Will this new job be the fresh start that Michael is hoping for? Hopefully, he is ready for a challenge. Find out if he has what it takes on November 18th, when Brew City Blues Book 1: Field Training is released. Head over to Amazon and Pre-order today. 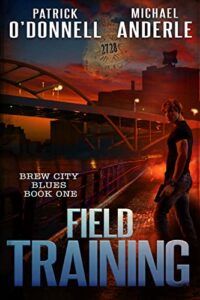