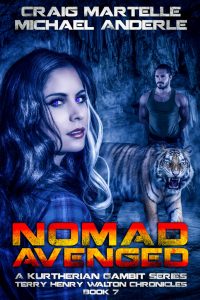 The latest from back of beyond, Alaska. Every day is above freezing, so that must mean it's summer! Enjoy your weekend, a frosty beverage, and a snippet!

“My! What brings you to my doorstep?” Jonas said warmly to the purple-eyed Werewolf standing before him. She was still in Were form. She dropped her clothes bundle and changed into human form.

Jonas leered at her. “You decided that you needed a real man, that the human couldn’t satisfy you?”

She stopped reaching for her clothes, frozen for an instant, before rotating and driving the heel of her hand into his chest. He flew backwards, crashing into a wall.

Char didn’t bother with her clothes. She launched herself at him, pounding his face with punch after punch. She pulled him to his feet so she could step back and send a sidekick into his belly button that slammed him against the wall a second time. With a spinning roundhouse that caught him on the side of his head, he went down.

She dressed while she waited impatiently for him to wake up. His eyes fluttered, and she pulled him roughly to his feet and slammed him against the wall.

“You always were a limp dick piece of shit, Jonas. I should probably just kill you, but first, I need to know why you did it. Tell me!” she demanded.

“What do you think I did?” he stammered.

“Who did I sell out?” he asked, clearly confused.

Char started to believe it wasn’t him, but she was certain he’d done something to deserve a beating. He always deserved to have his ass kicked.

She let him go. “A dozen Forsaken flew in here and took Terry Henry prisoner. They escaped before we could get to them. I know you’re in bed with the evil of this world. You had something to do with it, because that’s the fucked up shit that you do.”

She jabbed a finger into his chest hard enough to make him wince. She felt gratified seeing him in pain. She did it again, smiling at his anguish.

“Although I’ll be the first to congratulate the sonofabitch that kills your husband, I had nothing to do with this. If you find them, let me know. Tell them the first round is on me,” Jonas sneered.

Char had had enough. She turned into him with her arm raised, fist in hand as she rocketed her elbow into his face, crushing the bones beneath. She punched him twice for good measure. He didn’t go down until she kneed him in the groin hard enough to lift him off his feet. He landed in a crumpled pile, barely breathing but alive.

He’d live. Char shrugged, removed her clothes, and changed into Were form for the long run to downtown Chicago in search of the Forsaken, Joseph. Learn more about Craig Martelle and check out his other books at http://www.craigmartelle.com