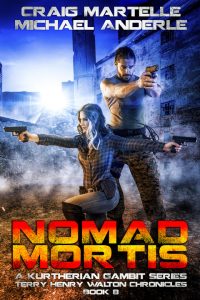 Terry stood on the shore, looking at Lake Michigan. It was going to be yet another beautiful day. Char and Cory strolled toward the docks. There was a small sailboat that they had access to. Although it was a community asset, very few people were comfortable sailing on the open lake. Terry liked to go out to clear his head, plan his next adventure.

Of course, he did that best with Char. Char’s and Terry’s views were mostly aligned to begin with, and he needed the viewpoints of someone who looked at the world differently, like their kids.

Cordelia was a natural. Kimber and Kaeden could also strategize at the highest levels, looking at the issues as unenhanced children of the new world. They knew what there was to know about the Unknown World, but they were still outsiders. Cory was born with the nanocytes. Her enhancements were natural, as well as different than those of Terry or Char.

She was a little stronger and faster than an average human which could have been due to being raised by two workout fanatics. She healed more quickly, and that was her real gift. Helping Akio with his horrific injuries sustained in Mammoth Cave, her eyes now glowed blue.

At all times, no matter what.

Terry’s and Char’s eyes only glowed when they were extremely agitated. Spitting mad they called it.

Behind them, Aaron and Yanmei were walking, hand in hand. Fu was nowhere to be seen as she was spending less time as Yanmei’s servant and more time as Gene’s girlfriend. Terry had expected that, but he knew about free will. Yanmei had not understood it.

Given a taste, Fu had fully embraced it.

“Gene?” Terry wondered aloud. He was a massive brute and Fu was five foot nothing and a hundred pounds. He shuddered to think about it.

Char and Cory both heard him. They had turned and were watching.

“I swear, you two could be twins,” Terry said softly, but he had to get his dig in. “But someone has you by about a hundred and twenty-five years.”

Char squinted at him, pursing her lips as she contemplated her next move. Cory watched her mother. With a barely imperceptible nod, they bolted straight for Terry. He almost fell over backward as he tried to turn. They caught his arms and dragged him backward.

They wouldn’t let him get his feet underneath himself as they ran for the water. With a final hop and choreographed toss, they hiked Terry past the rough shoreline and into the clear water. He missed as he tried to grab them and bring them with him.

He took it like a champ, backstroking into the lake, before turning and kicking back toward shore. The water was cool but comfortable. Terry didn’t see his dunking as a loss in the never-ending contest of his life, but an arrow in his quiver of paybacks. He’d wait, and when the time was right, he’d deliver a well-targeted practical joke that would demonstrate his overall superiority.

Most likely, he’d be found out, confirming his position as second best. He preferred it that way. Making Char or Cory look or feel bad wasn’t in his nature.

He strolled casually from the water approaching the two women who both stood with their arms crossed, watching him warily.

As he got close, they dropped into fighter’s crouches. Terry held his hands up in surrender. He removed his shirt and shook his head, tossing his wet hair, sending a stream of water in an arc around him. He started to unfasten his pants.

Cory turned and bolted. Char stood up straight, crossed her arms, and gave him her best disapproving look while keeping her eyes on her husband and his magnificent body.

“Well, if you aren’t going to fight fair…” He let the thought trail off.

“Ahem,” Aaron grunted from nearby.

Terry started refastening his pants, while trying to give his wife the “we’ll pick this up later” look. She wasn’t watching; his efforts were wasted.

“Have you noticed the hem lines are getting shorter?” Aaron asked.

“What the hell are you talking about? Who has hem lines?” Terry was confused. Char chuckled and shook her head, finally returning her gaze to TH.

“Just making conversation,” Aaron said. Terry had known the Weretiger a long time, but he’d never seen this side. Aaron was a funny guy.

All he needed was someone to bring that out.

To find out more about Craig Martelle and his exciting life in Alaska: http://www.craigmartelle.com/apps/blog/show/44582077-nomad-mortis-snippet-01