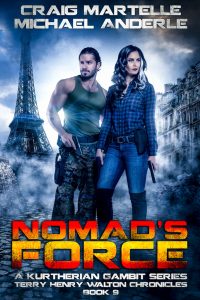 “I see,” Lacy said, slowly stroking her chin. She was too old and liked home far too much to throw her hat in the ring for consideration, but she thought that there might be less competition for the positions than the newly enhanced youngsters thought. “Let me offer an alternative. Why don’t we just ask them?”

“You mean, ask the members of the Force if they want to join?” Kae wondered.

“Yes,” Lacy replied simply. “You line up and they can join who they want and we’ll see how things shake out. I think you’ll find this lesson in human behavior enlightening.”

Kim, Kae, and Marcie considered themselves well-versed in human behavior having been brought up in the community with Terry and Char leading the way. Marcie’s father, Billy Spires had his moments of clarity when it came to dealing with other people.

Ramses was open. He had not had much interaction with people in his life. He appreciated the opportunity to lean, so he shrugged and watched.

Since the four of them were outranked by the Gunnery Sergeant, they unquestioningly agreed to do it her way.

The company, which consisted of two platoons since the other two were deployed to San Francisco, stopped their training evolutions for the day and reported to the front of the barracks where they stood in formation.

“At ease!” Lacy shouted. “Do we have a little something for you, or what? All I can promise is discomfort, physical anguish, maybe even some outright pain. Who wants to volunteer? ”

There were no oorahs as the warriors waited impatiently for the gunny to describe the bad side of the good deal.

“As I thought,” she looked at the four, and they returned her gaze impassively. Cordelia watched from the side, unsure of what the gunny was getting to.

“No volunteers, huh? Let me tell you a little bit more. You know that your squad leaders and platoon sergeant had been gone. Corporal Marcie filled in while the others underwent a special medical procedure to make them more like the colonel and the major. That means they’ll be in the line of fire that much more. And now they need help. We will have ten volunteers join each one of them—Sergeant Kimber, Corporals Kaeden, Marcie, and Ramses.

“You’ll train as a reconnaissance tactical team, a tac team where you’ll be dropped into enemy territory. You’ll scout an area and then return unseen with the information you’ve gathered. Some of you have already done some of this training. Others have not, but it only gets ratcheted up from here. You’ll work hard and you’ll be gone a lot. That’s the only thing I can promise you. The rest is up to you. And remember, ladies. The word ‘volunteer’ does not have to start with the word ‘I,’” Lacy told them.

She could see the wheels turning as they mulled the unsavory proposition. One warrior raised her hand. It was Camilla.

“I volunteer,” she said firmly.

“Fall in on the squad leader of your choice,” Lacy told them, stepping aside to let the warriors pass.

Camilla marched straight to Kaeden, nodded and stood next to him. She’d been in his squad before.

The rest of that squad joined her. Marcie’s squad fell in on her and Ramses’ squad joined him. Kimber stood alone, until a trickle of warriors came from the second platoon.

“The sergeant needs five more, ladies!” Lacy bellowed as she stormed toward the platoon. No one moved.

“Counting down. Five. Four. Three. Two…” she hesitated, drawing out the word. The warriors remained steadfast. “One. You, you, tall guy, you, and one more. How about you, smartass?”

Kimber wasn’t sure she wanted the one that Lacy had designated as a smartass, but he shrugged and left formation. Lacy looked at the remaining warriors. She had twenty.

“Well, ladies. That settles it. I’ll take the remaining bunch, and we’re going to train with them. So you’ll get all the pain and none of the glory. Strap in, bitches, we’re going for a ride!” Lacy grinned devilishly.

Those still in formation groaned in unison, but there were no slackers in the Force. The initial training weeded them out and after that, the training and operational tempo kept them sharp. The colonel didn’t want anyone getting lax. That was a hard and fast rule.

Lacy dismissed the platoon for the day even though it was still the morning with a call to report at daybreak with full packs and ready for a week in the field.

She watched as the four team leads briefed their squads. Once they released the group, she waved them to her.

“What did you learn?” she asked. Lacy had spent so much time with Terry Henry Walton that she’d picked up many of his character traits.

Ramses watched closely. His guess was that he’d earned the trust of his squad, and he wasn’t the only one who thought that.

“They trust us, their squad leaders,” Kae said, convinced he was right.

Lacy shook her head. It seemed that she had something different in mind. Marcie and Kimber didn’t offer anything else.

“People don’t like change. They’re creatures of habit. When given the opportunity to do something, they’ll do it the same way they did it yesterday and the day before. Understand that and use it against your enemies. Watch them long enough that you see the routine that they will inevitably fall into,” Lacy advised.