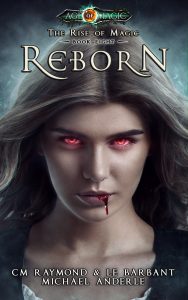 Karl closed one eye, tracing a set of stars with his fat forefinger as the wind whipped through his hair. The people in the Heights called it the “cup and handle,” but it looked more like the biggest smoking pipe he’d ever seen. Something that maybe the Matriarch would draw on after a long fight out in the galaxy, if she were predisposed to such things.

“Maybe I’ll join her,” Karl said, drawing his own pipe from his pouch.

He filled the bowl with some of the weed given to him by the people of Heema just before he left. It was a dry smoke with a tart bite at the end. Like nothing he had ever tasted, though it suited him well.

Blowing a long line of smoke out from between his lips in an elongated sigh, he watched the wind grab the smoke and pull it back toward the stern of the Unlawful.

“Are you still moping about your forsaken princess?” a voice asked from behind him.

He waved his hand at her. “Princess? I don’t know what yer talking about. Just going over battle tactics in me mind. That’s what a true warrior does when their alone.”

Hannah laughed as she pulled the pipe from his hand and took a deep drag. Her lungs raged and she coughed smoke into the summer night air. “Never knew why you guys liked to smoke this shit,” she said, eyes narrowed on Karl’s pipe. “Worse than breathing in Sal’s gas, if you ask me.”

He snatched his pipe back from her and grinned. “Tis an acquired taste, lass. Only comes with experience.”

“Just like herpes.” She grinned and patted him on the shoulder. “And battle-tactics my ass. I know a lovelorn face when I see one. You’re out here pining over that short, little package you left behind on the mountain.”

“Women. Can’t help it if they find me irresistible. Doesn’t mean I repay the favor.”

Hannah laughed. “That’s not the way the others tell it.” She leaned against the railing, her lips pursed. “You could have asked her to come with us you know. This ship is plenty big.”

Karl stood quietly for a moment, then sighed. “I’d be lying if I said I didn’t think of askin’ her. She was lovely — and strong as diamond. Ya would have liked her. But then I watched her, after the fighting was all done, and the Heemites were helping us mine some of those damned crystals for Gregory. I could see it, not only in her eyes, but in the eyes of all the others.”

“Leadership. It’s the same look you get in yer eyes.”

Hannah opened her eyes wide and leaned in close.

Karl laughed. “Aye, that’s the one. They were all looking at her to tell them what to do. And I don’t blame em. We kind of upended their whole religion and culture a little when we killed their gods. Her pa’s a good man, but he was a king of the old rules. He doesn’t have the vision to lead his people into a new future. Or the grit. And she’s got grit in spades. I knew right then and there that the place was with her people.”

They both stood quietly and watched the stars. Finally, Hannah said, “And what about your place, Karl? You could have stayed with her you know. Made a life of it among people like your own. Speaking from experience, you make a pretty good right hand man.”

Snorting, Karl said, “And let ye and these bastards try to save Irth without me? Not on yer bloody life, sweat pea. I’ll keep on being at yer side until all this is over.” He drew long on his pipe as his eyes drifted off toward the horizon. “That’s my place. That’s where I belong. Clarissa…who knows. Maybe I’ll see her again when times are different. But until then, there ain’t a force on Irth that can pull me away from you.”

Hannah couldn’t hold back her smile. But as her mouth turned up at the edges, her throat grew tight, and she felt the surprise of tears strike at her eyes. It was just about their anniversary — a year since Karl had saved her from a raging boar in the woods outside of Arcadia, just near the tower. She let out a tiny laugh, just thinking that it hadn’t been so long ago that an animal from the brush nearly killed her. Now she was possibly the most powerful magician in Irth — depending on Ezekiel’s mood.

It had been a year but felt like a thousand lifetimes.

Hannah grabbed the hilt of the rearick knife at her belt and drew it, the blade catching the night’s full moon.

“Schiesse, magician. I take it all back. Ye don’t want me here, ye just have to say so,” he said with his hands raised and a grin that could raise the dead.

“Thank you for this, Karl,” she said, glancing at the knife. “And for saving me that night at the tower, and a dozen more. I owe you. I’m glad you came.”

He looked down at the cracking leather of his boots. “It’s nothin’, lass. Just doin’ what any other rearick ought, really.”

Hannah shrugged. “Maybe. But you’ve done what most haven’t. I couldn’t be here without you, you salty son of a bitch.”

He waved his hand at her again. “Eh! I’m window dressin’. We all know that. But you… You’re like the Matriarch herself come to right every wrong and take names in the process. Aye, yer just as…”

Karl’s friend’s face grew deadly serious. Eyes growing wide, he took in the blade wondering if she might even use it. He gave a slight nod. “I see yer a true believer now, is that right?”

She sheathed the blade and exhaled long and hard. “It is difficult not to believe after all we have seen — all we have heard.”

“Aye, it is faith that believes in the things unseen, Hannah. And yer gettin’ there.” He laughed, easing the tension. “And there’s a damn many things less worth believing in than Bethany Anne and Michael. Like the fact that ye grew a dragon from a lizard and that ye might just love that little douche from Arcadia.”

If it weren’t so dark, he would have seen her blush. “Love? It’s a strong word.”

“That’s right. And ye know strength — of magic and justice. But maybe ye need to realize yer taken by him more than ye even know.”

Hannah jabbed him in the ribs with the point of her elbow. “You speaking from experience, little guy?”

“You can always go back — to Heema I mean. After we’re done with this whole ‘end of the world’ business. I’m sure you can hitch a ride with Gregory on the Unlawful. Who knows, by then they might be ready for their honeymoon.”

Karl snorted a laugh. “Those damned kids.” He looked out over the clear night sky, tracing again the constellations that were fading with the light of the moon rising up behind them. “You know there might not be an end to this war, right? I might just keep swingin’ me hammer until one of the bastards take me down, or until I’m too old to lift her. Either way, I might not be in much shape to get back to Clarissa by then.”

Hannah nodded as she followed his gaze over the rail. She knew, deep down, that he could be right, that the fight to save Irth might not be one with a clear victory. But she had to try, she had to fight for all that she loved — and for a future that she might not ever see.

Even with his words, she slept with dreams of a place where there was no more war, a city without walls and defenses, a New Arcadia for a new age.

“You blokes sure did kick some ass up there in the mountains, though, right?” Hannah looked back at him.

A smile stretched out under Karl’s beard. “Aye. We did a pretty good job, all right.” He turned, and Hannah could have sworn his eyes were a little glassey, but he blinked the gloss away. “I didn’t know what ta think when ye set me up with the brain, the freak, and the mental case, but, in the end, we made one hell of a team — even that little rat of Laurel’s.”

Hannah laughed. “Yeah, you did. And how about Gregory?”

“Shite. Hard to call ’em a kid anymore, ain’t it? He’s grown some stones as big as Aysa’s bolas. Combine a little courage with the stuff between his ears, and he’ll be a force to reckon with. Even the pretty boy pulled his weight this time.”

“Well,” Hannah snickered, “that’s saying something. Not even I can get Hadley to do that. I’ll have to put Gregory in charge more often. When I’m leading the BBB, Hadley usually spends most of the time fixing his hair.”

Before Karl could finish, a crack, like thunder, tore through the ink-blue night sky. Instinctively, they ducked, and Karl had his hammer in hand before Hannah had the chance to breath.

“The hell,” she finally said, searching the night sky for signs of a storm, but there was nothing.

Karl nudged her and pointed. “Tell me that ain’t what I think it is.”

Their eyes were fixed on a spot in the heavens, impossible to imagine. A swath of sky, nearly as big as the Unlawful floated on the horizon a few hundreds yards in front of them — a tear in the universe, whose background was darker than dark.

And it was growing.