Release The Dogs of War Snippet 09 of … 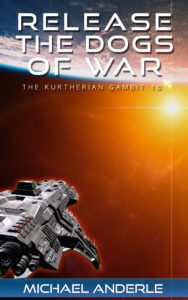 “There is the frame,” William said to Bobcat as the two came closer to the large manufacturing area which Jeo Deteusch as Lead of IOS Mining and Manufacturing and Bandile Annane his lead of Mining had focused the teams to build.

“Damn, they really have got their shit together out here.”  Bobcat replied.  He tapped the glass in front and spread his fingers to zoom in on a location in front of them, “I see they’ve used Jeo’s design to build platforms between the ships for staging and additional manufacturing areas.”  He moved the camera area, “Shit, they’ve completely enveloped an area with that canvas stuff and inflated it.  Rigid, lots of space under it.”

William was looking at the aft area of the ship, “That is going to be a sweet ride when it finishes.”  He reached down to pull up his tablet and switched to another app, “Looks like the latest design calls for a hundred and twenty-one different gravitational engines.  Sum-bitch that’s a lot.”

“Yeah, they added some up to the front and sides for rapid manuevors.  Another Jeo idea.”  Bobcat responded.

“Kid’s been around too many video games,” William muttered.  “He should have focused on shooters.”

“That’s cause your just embarrassed you didn’t think of it first.”  Bobcat retorted, “Give yourself a little credit for the tweaks you suggested.”

William shrugged, “That’s from the modifications we did to Shelly and how she handled,” he admitted.  “However, I’m completely taking credit for the ‘stopping on a dime and giving you nine cents change’ breaking option.”

“Gott verdammt dangerous, if you ask me.”  Bobcat said, “If the gravity modifications don’t work out, someone is going to impale themself on the bulkheads if they ever have to stop quick.”

William put up a hand and waved just two fingers up and down, “Someone get me out of this wall!”  He chuckled before he put them down, “Yeah, we will test the gravity to push against forward momentum and inside the protective shell as well to hold items in place against their momentum.”

“Fuck all, I don’t want to be riding during the first test of that feature.” Bobcat admitted.

“Yeah, that one does give me a few concerns, I’ll admit.”  William said, then thought for a second, “But I can think of a few ways that would help a lot.”

“That’s because you watched Top Gun.  It isn’t like this ship is going into a dogfight.”

“What if you come out of high speed right into a asteroid belt?”  William asked.

“I’d suggest you don’t come out at speed, then!”  Bobcat argued, “That’s why TOM’s people always engaged the engines from standing still.  It meant they were still wherever they popped up.”

William watched a moment as the massive production area grew in size, “Bobcat, all kidding aside.  This is going to be Bethany Anne’s ship for the foreseeable future.”

Bobcat looked at the almost complete shell and thought a moment, “We’ve better make sure that gravity idea works and while we are at it, see if we can do a flipping manuever.”  He sighed, “And whatever else we can think up because sure as shit she’s going to want to do it.”

“Worse than that, she’s going to get into some situation where she NEEDS to do it.”  William retorted.

From Michael >> Morning Bitches!  <I make myself chuckle typing that…  I wonder how many I'll piss off?  Hopefully no one, I mean it as “Morning Queen's BITCHES!” … See!  I get to do it TWICE 😉 … I crack myself up.

Either way, I'm researching here in New York and also freaking sick…damned stuff started in Texas due to Allergies and it has gotten worse while up here.  Not New York City's problem, it has been stupidly beautiful for us while here.  It was raining on Thursday when we flew in and now the skies are just fantastic.  The weather is fantastic…Most of the people (except my food waiter Thursday night) have been Fantastic!

Well, mostly fantastic. It seems NO ONE knows anything around here.  Like, I ask the police officer right outside our hotel where the best pizza is?  Not a clue.  I figure that officer was WAY too skinny to answer the question.  My bad, wrong body type.  But my wife and I've noticed the same response a lot, no one wants to venture an opinion.

So, I've gone to my handy forum where people are placing ALL SORTS of opinions on what to read next, and authors dropping in to say Hi and pulled up this one for your review (I've also enjoyed the first books in this series, just FYI). 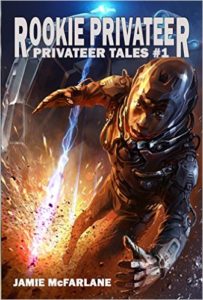 When you are old enough to finally become an Earth Mars citizen, everything should be perfect. Right? Not for Liam Hoffen. He's stuck on a mining asteroid called Colony 40, helping his father work a claim that is never going to pay out. His best friend, Nick James is set for life in James' Rental business and Liam just discovered that the girl he's known forever thinks he's pretty great and now she's leaving for the Mars Naval Academy.

Liam dreams of sailing the stars. Whenever he gets the chance, he jets into space and floats, wishing to be free of the asteroid that has claimed him. What he doesn't realize is that fate is about to change everything.

He and Nick are about to find out what the real world has to offer and they end up meeting exciting people along the way.

If you're looking for free science fiction ebooks, this will be a great addition to your library.