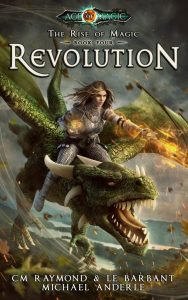 We have the first snippet from Revolution by C. M. Raymond, Lee Barbant, and Michael Anderle. But first a word from Lee…

I (Lee) only have a minute, so I’m going to type this fast. I’ve been rocking a crying baby for the last hour, and now that Baby Barbant has finally fallen asleep, I figure I can get in some brief snippet time.

I’m not even changing out of my pee soaked clothes first….so you know I’m dedicated to YOU, the fans.

This parenting thing is no joke. Someone should have warned me.

Anyways, we’re wrapping up book 4, and I am so excited for you all to read it. Basically everything that you (and I) wanted to happen for the last three books finally happens. I got the chance to introduce my new favorite character. A fan favorite (who shall remain nameless but you all know who I’m talking about) finally gets to kick some ass. And some long overdue justice gets served–and despite how long it took to get here, it’s piping hot.

Thanks for your patience, and your reading, and your kind words. You all are the best. Hopefully we get the full book out this week, but in the meantime, enjoy this snippet of Revolution: The Rise of Magic Book 4.

And how about that cover, huh?

Cold rain fell like a barrage of arrows, threatening to drown what little survived amongst the Boulevard’s charred remains. The Queen that the slums were named for was long gone, but even she couldn’t bring back what had been taken from this place. Though it had been over a week, the rubble still smoldered, a testament to the power at Adrien’s disposal, and the damage his airship could exact.

Adrien’s eyes were fixed on the spot before they meticulously scanned the whole but empty city streets surrounding the Boulevard. The commoners—any who had lived through the Chancellor’s onslaught—had deserted Arcadia with the wizard and his Witch Bitch. And although the success of his airship should have made him feel triumphant, Adrien felt nothing but rage.

They had stolen from him, but victory would soon be his.

Adrien stood for another moment as if he hadn’t heard the man and then finally turned, his long, blood-red robe flowing around him. The medallion of the Chancellor—reserved for ceremonial occasions—hung around his neck.

“They’re all assembled?” he asked, finally turning toward Doyle.

Swallowing hard, he nodded. “Yes, sir. All that remain. Fewer than I expected.”

The rebellion had claimed lives. His soldiers were killed in the streets—along with the Prophet and his faithful. But the Academy had seen its share of casualty, too, mostly by way of recruitment. It appeared that a small number of his own flock had thought Adrien’s actions were too extreme. They fled with the rabble. Their punishment would be even more severe.

Without another word, the two men proceeded out of the tower and toward the great hall.

As they entered the auditorium, Doyle spoke. “Your forces, sir, those who remain faithful, they are more committed than ever. If anything, that pitiful rebellion only culled the weak and spineless. All true Arcadians continue to stand at your service.”

They had better, Adrien thought. Or I’ll flay them alive.

“Thank you, Doyle,” was all that he said. He handed Doyle his notes and turned toward the stage. He had considered his words for days and could recite the speech by heart. Pushing through a set of double doors, he stepped out onto the broad platform lit from overhead with magitech spotlights. The crowd rose to their feet and applauded their leader.

Doyle was right about the size—he could see the empty rows in the back of the auditorium. They had taken some losses, but the look of commitment that washed over the faces of all in the room inspired more confidence than could be expected. Power surged through Adrien’s body; electricity tingled around the surface of his skin. The remaining faculty stood on the stage prepared to follow him wherever he might lead.

Eyeing the empty seats, he finally smiled at Nikola and August and gave them an assuring nod. They would be compensated well for their loyalty—or at least for their intelligence in choosing the winning side.

Raising his hands, Adrien smiled broadly. “Thank you. Thank you, so much. Now, please sit.”

For the first time, his devoted denied his command. They remained standing, and the applause only grew louder.

Seldom given over to these emotions, Adrien’s throat constricted. He was overwhelmed by their commitment. They recognized his power for what it was. Nodding, he said again, “Thank you. Now, sit. There is no time for fanfare.”

The crowd simmered to silence and sat, the faculty followed suit.

“You all know of the cowardly attack against us. The fake Founder and his student from the Boulevard infiltrated these very halls.” Heads nodded in response. “It was an attack none of us could have expected. I had always hoped that Arcadia would stand in the light of peace for all of her days. But peace is not easy to maintain when there are others lurking in the shadows who covet all that you have, who want to destroy you.”

The audience shifted in their seats. His words inspired them, as much as they filled them with fear.

“Your loyalty to Arcadia—and to me—is truly touching. You are my faithful, and I will never forget the faces that are here tonight. But let us also not forget the faces of the others. Of the ones committed to our vision for a beautiful city whose bodies are still cooling in their graves. Magicians, Guards, and Disciples alike bled for the sake of our vision, which was big enough to give their breath to. And now, it is time to hunt down the bastards that destroyed our city. It is time to make them pay.”

The crowd leaped to their feet, and a steady roar hung in the room.

Adrien smiled and nodded. He let them cheer and shouted over the clamor. “Each and every one of you will be key in our victory. Faculty, it’s time to leave behind your books and your offices. Students, consider this your official graduation.”

He paused, and let the frenzy grow.

“School is out, boys and girls. It is time to go to war!”

To learn more about C. M. Raymond and Lee Barbant and their other books: http://www.smokeandsteel.com