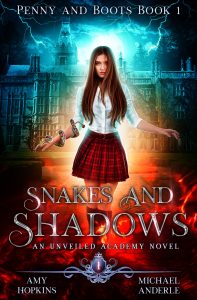 With this new universe coming later this week, I thought I'd share a little snippet with you! This is going to be a fantastic academy series! Amy Hopkins is writing the Penny and Boots series with Michael, while another writer, Jace Mitchell, is doing another series in this universe with Micheal. See tomorrow for that snippet!

You won't want to miss anything with the Unveiled Academy series. So, to start here's the Snakes and Shadows snippet!

“You tell that scaly thing that if she ever turns up at my restaurant with a rodent, I’ll—”

“I’ll tell her, Mrs. Chu.” Penny peered into the hotbox of the Chinese takeaway shop, but none of the plastic bags looked like hers. Boots dangled over Penny’s shoulder, almost tumbling off as she tried to get closer to the hot glass. “Am I too early?”

“Your dinner is out back. Extra dumplings, ok? Keep your energy up. And two Cokes, I know you like that rubbish.” Mrs. Chu vanished from the servery window and reappeared at the door to the kitchen. She stopped to give a regretful sigh and patted her own plump stomach. “You certainly aren’t getting fat from it. You will one day, though!” Regret turned to glee, and she cackled happily.

Penny took the heavy plastic bag full of square containers, two cans of Coke balanced on top as promised. “Thanks, Mrs. Chu.” She turned to go but looked back when Mrs. Chu called her name.

Serious now, the old woman wagged her finger. “That man was here asking for you again. And your snake, too! You stay away from him. Men like that mean trouble.”

Stifling a squirm of unease, Penny nodded. “Thanks for the heads up, Mrs. Chu. I’ll keep an eye out.”

Mrs. Chu meant well. The problem was, Penny didn’t know quite what to do about it. She knew the stranger had asked about her at the Takeaway shop before, and the pub. She’d never seen the guy in person, and she had no idea what he could possibly want with her.

Mrs. Chu and Dave, the publican, had both agreed the mysterious stranger was tall, curly-haired, and dressed like a “city boy.” He spoke like a Yank and was polite but formal. Dave swore the guy was a government spy.

Larrabee wasn’t exactly a bustling town, but with a population of three thousand and growing, the days when everyone knew everyone were long since gone.

Still, what does he want with me? Penny wondered.

She yanked open the passenger door of her car and carefully put her dinner in so it wouldn’t slide around. Once she was belted in behind the wheel, she started the car. Then she sat for a minute.

“Dammit.” She was out of beer at home. The liquor store’s lights twinkled invitingly, a beacon of happiness at the far end of the string of shops. “Screw it. It’s hot as Hades out here. I need a drink.”

“Stay here, Boots.” She killed the engine and pulled herself out of the car, smiling when the tinkling bell above the liquor shop’s door announced her presence. “Hey, Dave. Got a six-pack in there for me?”

Dave grinned and gave her a wave as he finished stacking some wine bottles into a display rack. “I’ll grab one for you, mate.”

“Thanks!” A few minutes and some idle pleasantries later, Penny was the proud owner of a six-pack of beer, although her purse was a few dollars lighter for it.

She stepped outside and squinted, blinded for a moment by the glaring sun.

As Penny turned to her car, she heard someone kicking up a stink.

The local drunk’s slurred growl sent Penny’s heart plummeting to her shoes. “I’ll catch ya and stick ya in a box! Then they’ll bloody see you’re not normal!”

“Oh, shit.” As her eyes adjusted, Penny evaluated her options: dash in and drop the beer, or take a moment to set it down carefully.

Deciding Boots could fend for herself for a moment if need be, Penny took the second option.

“Hey, Jerry. What’s up?” she called, trying to buy herself a moment as she dropped her possessions safely on a nearby bench.

“It’s that fuckin’ snake! I told ya, I told all of ya! It’s not right!” He pointed at the eight-foot-long rainbow serpent that had wrapped itself around Penny’s side mirror. “All rainbow-like and smart. She’s got it in for me, that snake.”

“She’s just a snake, Jerry,” Penny soothed. “Nothing special about her. I see a bottle of Bundy in your hand, though, and it’s looking pretty empty.”

“I’m not drunk!” Outraged at the prospect, Jerry drew himself up. Or he tried to. He teetered and tripped toward the car, then flinched away from Boots hard enough to send him flying in the other direction when she coiled up, ready to strike.

“Jerry? You’re definitely drunk.” Penny approached, holding her hands out to try to calm him. She stepped carefully, knowing rum turned Jerry into an asshole, and that the town’s insistence that he was a crazy old fart had given him a vendetta against Boots.

Penny didn’t know what the deal was with the glittering multicolored serpent, but she had her theories.

Boots had appeared around the same time as sightings of supernatural beings had started to go crazy.

Videos online were getting millions of hits, although, from the comments left on them, it seemed only a small percentage of people could see what Penny could. Creatures from myth. Living, breathing legends.

That had been three months ago.

As far as Penny knew, she was the only person in Larrabee who could see Boots in her real form. The others in town would call her a tree snake, saying the “pretty green thing” made a lovely pet.

Jerry saw her real form too, but only when he was utterly shitfaced. Penny would have felt bad for him, but Jerry was a racist piece of shit who had harassed Mrs. Chu for years.

“I’m not inberiated…inibriabered… I’m not drunk!” Jerry’s outrage had turned to desperation. He stumbled back to his feet and pointed at Boots again. “I can see it! A big-assed fucking rainbow sna— FUCK!”

Irritated with the pointing finger, Boots had done what any threatened snake would do. She bit.

Jerry screamed and jerked his hand back, but Boots had a solid grip on the digit. “FUCK! GET IT OFF!”

Penny jumped in just as Jerry slammed his fist at Boots’ head. He missed, punching the door of the Land Rover instead.

Boots let go, then reared back and hissed, mouth wide to strike again.

“Don’t you even think about it!” Penny snapped, turning a warning finger on Boots.

Jerry saw the gesture and lunged at her. His fat, sweaty hands clutched Penny’s shirt. “You bitch! You know! You know it’s something weird, don’t you?”

“Oh, for fuck’s sake,” Penny muttered. She really didn’t want to fight Jerry. In his current state, that wouldn’t be fair at all.

She pushed his hands away, but he swung another punch, clipping her ear.

It stung. The bright pain wiped all of Penny’s reluctance away, and she let her reflexes take over. Her fists had been itching to swing since the mention of her friendly neighborhood stalker.

Penny tightened her grip on Jerry’s wrist. Instead of pushing it away, she pulled it toward her as she twisted. A little dip of her foot, some careful weight distribution, and Jerry was flat on his back, gasping for air.

Penny looked over her shoulder to see Dave leaning on the doorframe of the bottle shop. “Thanks for the help,” she said, grimacing.

“You looked like you had it under control. How are you feeling, Jer?” Dave clomped over slowly and hauled the other man up by his elbow. “Remember what I told you? Any more trouble and I cut you off. That right there was trouble, my friend.”

Jerry groaned. “It wasn’t my fault!” he muttered. Having the wind knocked out of him seemed to have done the trick. He let Dave guide him inside, muttering about aliens that looked like snakes.

Dave already had his phone out to call the local constabulary. “I’ll get Pete to drive him home. You take care now, Penny.” In a town this size, driving the local drunks home was classed as exciting, so Pete likely wouldn’t mind the task.

Penny nodded, feeling tired after the unexpected confrontation. “Thanks, Dave. Maybe next time he’ll think twice before downing a bottle of rum before sunset.”

The late afternoon sun beat across the dusty road, bathing the old white Land Rover in shades of pink and orange. Penny jerked the driver's side door open. “Come on, Boots. Let’s get outta here before Jerry wakes up and decides to turn you into a handbag.”

Hahahaha, this sounds like it's going to be a blast! Come back tomorrow for the next snippet of Paranormal University First Semester! 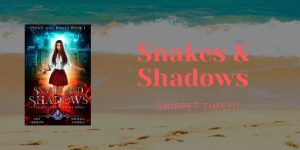