Here is the second snippet for LMBPN's latest series, Middang3ard.  Book one is coming next week! 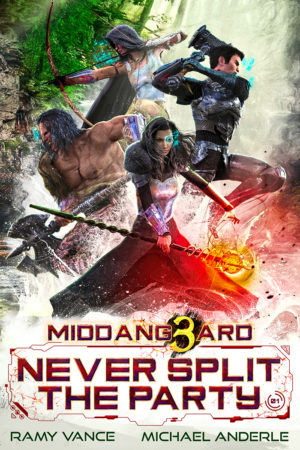 Myrddin Emrys shook his head as he watched them from backstage through the disturbed surface of the water in his scrying pool, which was set in a giant black cast iron cauldron.

The cauldron not only showed him what was happening, but it also revealed what was being felt by the leaders. The ancient sorcerer was hit by a wave of emotions that were a mixture of confusion, anticipation, and fear.

Today, Myrddin thought, I’ll finally get to see if all my centuries of planning and preparing have paid off.

He doubted it. He doubted anything could prepare them for what would come next.

He had hoped there would be more time, but in the last six months, the Dark One had become far more aggressive, conquering one world and destroying another. Whatever the Dark One’s plans were, they were accelerating, which meant Myrrdin had no more time to prepare.

He needed to act now.

Waving a hand over the scrying pool’s surface, he watched as the faces of the dignitaries blurred together into a massing of black figures marching, converging into one shape—a black amalgamation that stood to the height of a tower.

Orcs, trolls, ogres, and all manner of the Dark One’s forces were amassing. Soon they would overrun Middang3ard.

The old wizard had protected his home and fellow humans for as long as he could. He had also prepared them for a war of magic and mythical creatures through games, stories, and legends that most humans believed to be make-believe.

He had prepared them as best he could through his game, something that VR uniquely allowed.

Through the game, millions of humans had learned how to swing a sword, cast a spell, and navigate the complex inner workings of the real Middang3ard.

But was it enough? No, of course not. A game was just a game. The real thing was…well, real.

But if Earth was to survive the Dark One, he needed soldiers to come to Middang3ard to fight the Dark One’s forces.
He needed adventurers. Heroes.

Perhaps then, and only then, could they stop the Dark One from invading their home. That, too, he doubted, but better to fight and try than submit and die.

However, to get any of that, he first needed to convince these world leaders that the threat was real. To make them understand that they needed to commit resources—serious resources—if there were to be any hope of defeating the Dark One.

That would take time, and tonight was just one step. But while these human leaders were taking their time committing their forces, Myrddin would start to recruit his own army.

He sighed as he mentally prepared himself for what was to come next. He needed to persuade the world leaders, and that required proof.

“Fine,” Myrddin snarled as he slammed his hand into the water’s surface, destroying the image of the Dark One’s army. “They will have their proof, for tonight I will take all of them to Middang3ard to breath its air, touch its soil, and taste the blood of all those who have fallen to protect its hallow grounds. Tonight, I will release the Expansion.”