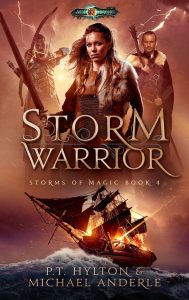 When they came to kill Lara, she was reading the letter she’d written to her daughter.

She’d read it dozens of times, at least once a month ever since Abbey was born. There was a ritual to it; it soothed her troubled heart to read the words she couldn’t say aloud. The things Abbey was too young to understand. The things Lara wasn’t sure she’d be there to say later.

Lara had long ago resigned herself to the fact that she might not live to see her daughter grow up.

It was early afternoon and Benjamin and Abbey were visiting the home of one of Benjamin’s fellow Hunters, a man with a son a year older than Abbey. With her three-year-old daughter out of the house, Lara had a rare few hours to herself.

And yet, she was spending the entire time reading and rereading this piece of parchment.

She finished the letter and refolded it so the word “Abbey” showed on the front. Then she stared at it for a long time, considering what her daughter would think of her on the distant day when she finally read it. Would she understand? Or would it make her hate the woman who’d given her life?

A loud pounding on the door startled her, interrupting her thoughts, and a chill ran through her. That wasn’t the knock of a neighbor wanting to have a casual chat.

That knock had authority.

She briefly considered ignoring it—just pretending she wasn’t home—but if her visitors were who she suspected, that would only lead to them breaking down the door. They weren’t really the “We’ll come back later” types.

She stood and straightened her dress, using the time to steady her nerves. If it came to it, she’d fight. Taking a deep breath, she mentally prepared herself for that possibility.

She strode purposefully to the door, forced a smile onto her face, and pulled it open.

Her heart sank at what she saw.

“Hello, gentlemen,” she said in a chipper voice. “Here to see my husband?”

The grim looks on their faces made it clear they were not.

She recognized all four of them, but she couldn’t remember the name of the one in the back. He’d only been a Hunter for a month. She knew the rest of them all too well. These were her husband’s friends.

Luke, the man who spoke next, did not sound sorry at all. “You think we’d do this when your husband was here? How dumb do you think we are?”

“Very.” Lara shouldn’t have said it, but she couldn’t help herself.

Daryl grimaced and pushed his way past her into the small home.

Lara forced herself to stay calm, to remain composed. Yet she held onto the fear and anger that was forming a tight ball in her stomach. If it came to a fight, she would use that emotion.

“Come right in.” Her voice sounded remarkably calm, considering the fear raging inside of her. She had to get through this for Abbey’s sake. “Such brave men, waiting until my husband’s gone before paying a visit. Were you watching the house?”

All four Hunters had entered now and they stepped aside, allowing another man to come through the door.

Even though he was draped in shadow, Lara recognized him immediately. She let out a gasp of surprise when she saw him.

He stepped into the light and flashed his signature wide, toothy smile. His raven-black hair was shorter, but other than that he looked exactly as she remembered. It was difficult to believe it had been five years since she’d last seen him.

“Hello, Lara.” He crossed his hands in front of his waist and stared at her with those piercing eyes, so dark they were almost black even when he wasn’t using magic.

She froze, torn between running away and slapping him square in the face. “Carter. I didn’t know you were back. Last I heard, you were following a lead south.”

“Indeed I was. Then I went east. Farther east than you could imagine possible. I’ve seen things that you wouldn’t believe. Places where the sand stretches so far you think you’ll never see the end of it. Places so cold you practically have to put your hands in the fire just to get the feeling back in them. And the people…” He made a strange scoffing noise in his throat. “Such people. And I thought the scum on the Boulevard were bad! But I’m back now.”

Lara fought to keep her voice level. She wanted nothing more than to get this man out of her home as quickly as possible. If he was still here when Benjamin arrived…well, she didn’t want to think about what might happen.

“Does this mean you’ve finally completed your mission?” she asked.

“And how’s Chancellor Adrien feel about that?”

The man paused a moment before answering. “He understands the difficulty of the task. That was why he assigned it to me.”

Lara wasn’t so sure that was true. Some claimed Adrien had given Carter the job because it would send him far from the city. Carter was the only person in Arcadia who could hold a candle to Adrien when it came to power, so he was a threat. Or so some people speculated.

The Hunters stood on either side of the room, flanking Lara. They held their shockers ready.

Carter cast a disdainful eye around the room. “Tell me, does your husband really believe you picked up your magical skills from some uncle? Or has he figured out you’re lying to him?”

“Whatever helps you sleep at night. Fortunately, your story provides the perfect cover for your death.”

Lara had known he was there to kill her the moment he walked through the door, but hearing it spoken plainly sent an icy chill through her. If she was going to get out of this, she needed to fight.

Carter gave her a pitying look. “Lara, you had to know this day was coming. After everything you’ve seen? Everything you know? You refused to help us, so there’s no other choice.”

“What about my family?” It was a foolish question, but she needed to keep him talking.

He chuckled. “That’s the beauty. We’ll claim you’re just another Unlawful who was caught practicing magic. You provided us our alibi. Isn’t it rather convenient that after—”

Lara raised a hand and cast, sending a dagger of ice flying through the air toward him.

For a gratifying moment a look of surprise crossed his face, but he quickly recovered, moving his right hand before the dagger reached him. The ice turned to water and splashed harmlessly onto his shirt.

He shook his head sadly. “You’ve gotten slow. Time was that ice dagger would have been through my throat before I even knew you were casting. Domestic life has not agreed with you, Lara.” He turned to the Hunters. “Take her.”

“No!” she turned and grabbed the nearest piece of furniture, the dresser. But the Hunters were soon on her.

One of them knocked into the dresser and she watched in horror as the letter she’d written Abbey slid backward and fell behind the heavy oak piece.

As they dragged her from the house, she gave no thought to the loss of her own life. She’d known for a long time that this could be coming, and, in a way, she’d been the cause of her own downfall.

Her only concern was for the letter.

How many years would it be before Benjamin moved that dresser? Or would he even stay in that house once she was gone?

In her heart, she knew he would not.