Temple of Satan Sues Sabrina over use of Baphomet statue 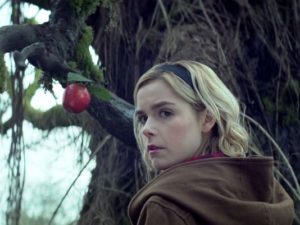 Since it’s release on October 26th, The Chilling Adventures of Sabrina has been yet another massively popular addition to Netflix’s already powerful coven of shows. However, it would appear that the Temple of Satan is not a fan, having filed a $150 million dollar lawsuit against the streaming service and Warner Bros., claiming in the United States District Court in Manhattan, New York City, that they had copied several unique features of the Temple’s depiction of the occult deity in the statue featured in the show.

In Sabrina, the statue resides in the main area of the Academy of Unseen Arts, a magical school where all witches and warlocks are sent to learn the ins and outs of magic for the Church of Night. The show presumes that other covens, none are named but they are mentioned, have their own schools, but this is the only one we see.

The original image of the being, Baphomet, is androgynous, a human female body with bare breasts, winged and with the head of a male goat. The Temple of Satan’s version was commissioned in 2013 in challenge Oklahoma’s statues of the Ten Commandments in their state’s Capitol. Eventually, the Commandments were removed and the Temple relented. Their version has some changes that make it different from that original image, namely that the human chest is male in the Temple’s version, and a pair of children looking up to it. This is, in my opinion, other than the medium of the statues, the show’s marble versus the Temple’s brass, is nearly identical to the one in the show.

But that’s only part of it, as the Temple are using this public relations grab to note that Satanism isn’t what the show makes it out to be. While the Church of Night doesn’t actually exalt themselves as Satanists of any real-world denomination, they do worship Satan, who seems to walk among them. Sabrina’s fictional version of Satanism is strangely patriarchal, for all the callbacks they have to Salem and how otherwise feminist the show is. The Temple themselves are nontheistic, using Satanic and occult images to promote messages of social justice and the separation of church and state. They believe that the show, in using their imagery in relation to an antagonistic Satan and worshipers who partake in cannibalism and evil acts, harms their messaging and reputation.

The Chilling Adventures of Sabrina’s production designer told Vice prior to the lawsuit that the countless similarities between their statue and the Temple’s were “kind of a coincidence”. Since the filing, Netflix has deferred all questions to Warner Bros., who in turn has thus far declined to comment. An interesting note on comments about this litigation, the Church of Satan, which is a separate and unaffiliated group who publish The Satanic Bible, issued a statement that they have no problem with the depictions of Satanism as shown in Sabrina, saying “while TST is known for childish PR stunts … these actions are not in anyway representative of the apolitical, individualistic and atheistic religion of Satanism. Please do not attribute their actions to us.”

While I think some of the Temple’s views are interesting, and I applaud their political antics, I don’t think that suing a billion-dollar multinational corporation because they aped a statue to a deity that you don’t even actually believe in was a good move, public relations-wise. Mudding the waters further, the leader of the Temple, Lucien Greaves, accepted work pro-bono from a lawyer best known for defending Alex Jones and other Alt-Right figures to do this suit. All in all, I think it would have been best if the Temple had just left well enough alone, no one who would have an open mind to Satanism would have thought that the show would be a factual resource to learn more about it. Part one of The Chilling Adventures of Sabrina is currently available on Netflix.