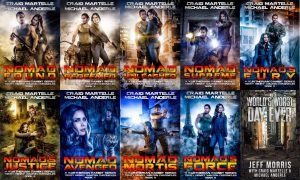 This week's short story was indeed short. For next week, I'm working on a piece about Joseph, in Williamsburg, Virginia, in the year 1776. Let's take a look into his past from long ago, when he was still young, as far as Forsaken went.

Terry laughed lightly, closing his eyes as he remembered when Betty, Lester, and their three cows finally made an appearance.

Terry had been at the Weathers’ ranch when someone started yelling from the other side of the main gate. Terry and Auburn headed out to see who was there.

Once he saw the three cows, he knew who it was. James and Lacy had relayed the story about how Lester had attacked one of the wolves after Ted’s pack went after their cows. Lacy had no kind words to say about Lester, but she had thought Betty would be a good addition.

Terry remembered that conversation well. “We can’t pick and choose like that,” he’d told her. “We have to give everyone a chance. I’m sure the old bastard has a soft spot under that gruff exterior.”

Terry had tried to keep it light. Lacy didn’t like him and probably never would. It was time for Terry to judge for himself.

“You must be Lester and Betty. I’m Terry Henry Walton, and I am pleased to finally meet you!” he said in his most welcoming tone.

“See Betty? I told you they was all a pack of shit-eating morons,” Lester grumbled.

“Lester, please. Why do you have to be so hurtful?” Terry asked, more in jest than serious, but Betty wanted to answer.

“Because he’s just mean!” she blurted. “But there’s a kind soul somewhere beneath all that old-age crust he’s carrying around. Fuck off, you crotchety old coot!”

Auburn snickered, and Lester glared at the young man. “Why don’t you open the gate and let the cows into the pasture with the others. They’ll feel more at home among others of their kind,” Terry said to Auburn.

He wasn’t talking about just the cows.

Betty and Lester helped the Weathers boys stay calm when they thought there was a bad turn of the weather, a weed infestation, or roaming predators. The old people had a good sense of where the young and energetic could best spend their time.