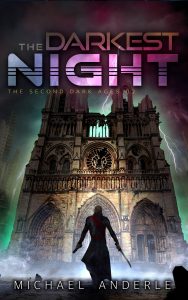 Sherry Logstrum let her friend continue on to the control area as she stopped to enjoy the night for a moment.  She pulled out a small stick that had been soaked in a few mildly soporific chemicals and placed it on her lips.

It helped keep the dreams away at night.

She happened to notice a man in a black robe, his hood over his head carrying a sword step out of a dark area some fifteen paces away.  He walked into the same area the huge fight with monsters of the night, the police, and monsters who rallied to save the city.

And the one who called down lightening.

Sherry took a couple of steps out of the light, trying to see better when the figure looked up. Sherry followed his gaze and her mouth opened as something as dark as the night without any lights floated down out of the darkness.

“You…” she whispered out as the man opened the floating ships canopy and jumped in.  He turned in her direction and smiled. She could see his white teeth reflecting light.

“No Sherry,” the man spoke out, “I am not a fiction of your imagination.”

With that, the canopy closed and the ship lifted up silently into the night and headed towards the ocean. Sherry stayed a moment and beyond, watching the sky to see if she could see it cross the stars.

Her stick laid on the ground, forgotten.

“What the hell!” The Captain sputtered as he forced the liquid that was drowning him out of his mouth, then used his forearm to wipe the water from his eyes.

He blinked a moment, then looked into the grave eyes of the young woman staring back at him. “What happened?” He asked as he reached out to feel along his neck.

“Don’t flatter yourself,” Jacqueline smiled, “Michael isn’t going to suck on your neck.”

“Wasn’t him I was worried about,” the Captain grumped as he accepted the towel Jacqueline handed him to dry his face, and what he could of his hair and shirt. He used his hand to circle his body. “Got to make sure you didn’t want a piece of this and then my wife would see a hickey. I’d be dead for sure.” He grumped.

Jacqueline smirked, “Now, that IS flattering yourself. But it’s also funny.” She snapped to get his attention back, “Hopefully, you don’t have a concussion…”

He reached up to touch his head, jerking back his hand when he touched the sensitive area that had been hurt, “the hell!” He flinched again after a second try. “What happened?”

“You know, that’s a story for another time.” Jacqueline answered, “Let’s play catch up really quick.” She started, but then the ship dipped, the power flickered, and the Captain looked around, memory dawning on his face.

He reached out to grab his dresser and helped himself to stand up, “Why are we in here? Gott Verdammt, we are in a fucking storm!” He staggered over to his door, his balance getting better the longer he was standing and moving. Jacqueline walked along with him, waiting to catch him if he fell.

The Captain stopped, his hand on the knob and looked over at the woman. “Aye, I do remember that part. What say we both agree not to mention anything about this last thirty minutes and I’ll owe you one?”

Jacqueline took a second before holding out her hand, “Agreed and let’s go save our hides.”

The Captain opened the door, then shook her hand once, “Deal.”

Back in his room, Michael smiled.

That girl was luck personified, sometimes.

FROM MICHAEL >>  So, I had my discussions with Lynne Stiegler (remember last snippet?) and I'm very happy to say that she is now working inside the Kurtherian Gambit Universe.

One nice thing (other than that she was already a fan before becoming a copy-editor) is that she has worked on books by David Weber, John Ringo, Marc Stiegler (notice the name similarity?) and many others.

Books I've read when I was younger…let's not discuss HOW much younger #ThankYouVeryMuch.

Natalie Grey is a ghost writer. In our business it (usually) means that she writes books, and NO one knows she ever did it. The author working with her to put it out (they are collaborations usually) hires her to write most of it and then they will edit and place their own name on the book.

I reached out to Natalie months and months ago and offered her the same deal that Craig, Justin etc. etc. have. However, for her family, she couldn't jump on the deal since her family NEEDED the income the ghost writing brings in.

Money up front trumps long term income when it means food on the table, am I right?

However, I refused to treat Natalie anything but as an equal partner, who just was paid differently.

So, we created a unique Pen Name for Natalie, one that would work to give her a foundation so that if she wanted to try her hand at her own books, she absolutely could because her association with TKG would give her a name.

A name she could hang her writing hat on.

Now, the first Natalie Grey (solo) book is out and I can't be more proud that she has done this and I wish her the MOST success for her personal series. (We are about to drop book #03 that we have done together, so more Natalie Grey is coming!)

If you are interested in what she has done, here is the US Amazon Link to her book. If you are in another country, try searching on the ASIN which is B072BJYNZ8 .