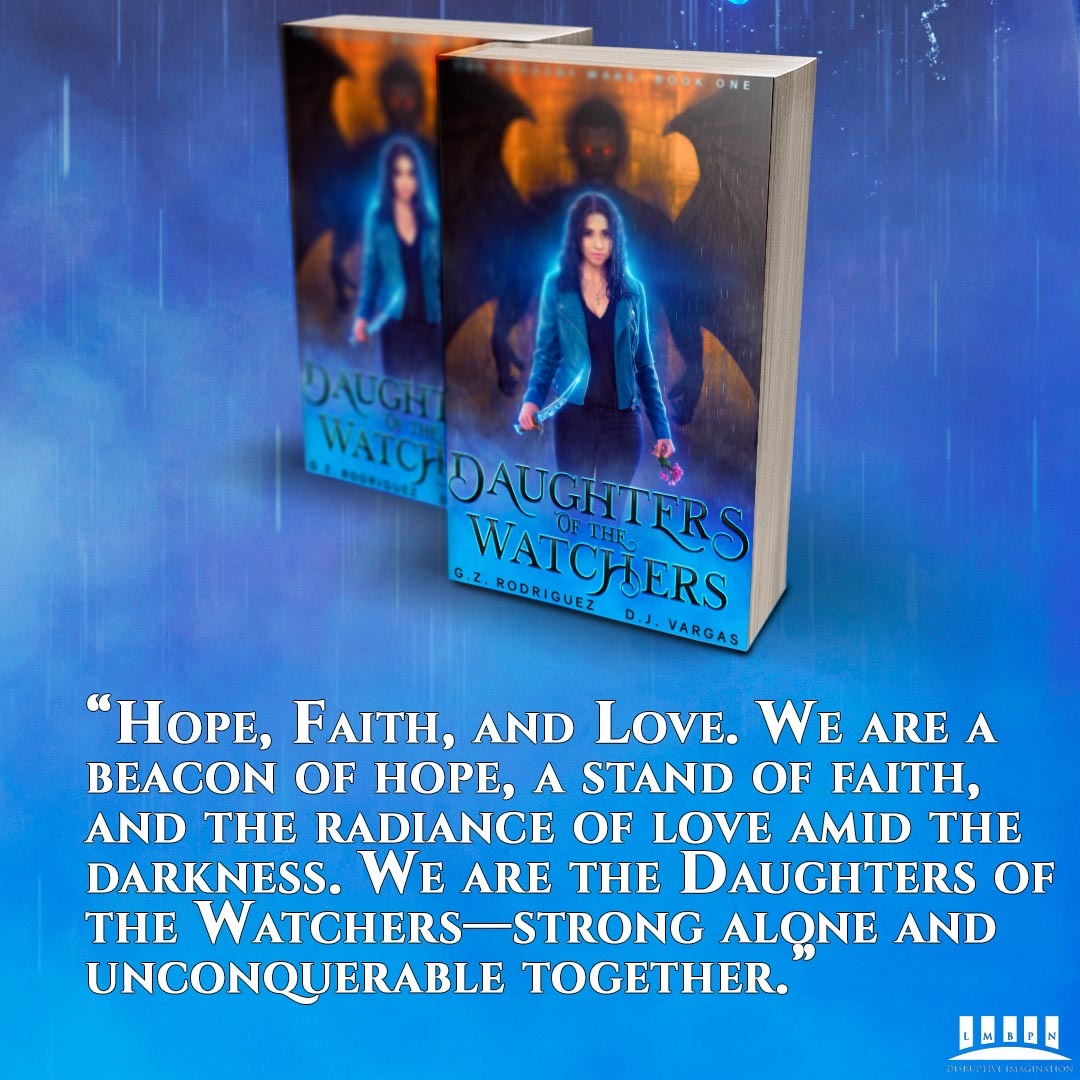 The Progeny Wars Book 1: Daughters of the Watchers

The race is on the for the Daughters of the Watchers. They must beat the Nephilim before it's too late.

“Cookie, you need to hurry. The seer predicted that she’d die if we don’t reach her in time,” cried Dough without shifting her gaze from the GPS app on her smartphone.

“Moooovee! Get out the way, you jerk!” Cookie yelled and honked at the SUV in front of them. She darted a glance at her twin sister in the passenger seat. “Then next time, you drive. I’m doing my best here.”

“Because I drive better at night, remember.” Cookie’s hands gripped the steering wheel tightly as she accelerated into a hard right turn and barely missed the other vehicle.

Dough lurched forward and suddenly widened her eyes. “Watch out for the bike messenger!” She stomped her right foot on an imaginary brake pedal—twice.

Her sister placed her left foot deftly on the brake pedal, turned the wheel left, and pressed down hard on the gas with her right foot. “I hate those bikers. I swear they’re from Hell.”

The other woman’s normally olive complexion assumed a greenish tinge. “You’re driving with two feet again.” She opened the passenger window and stuck her head out. “You keep driving that way and I’m gonna barf.”

“Don’t do that. I’ll sense your nausea and we’ll both be sick.” Cookie continued up Broadway with the pedal to the metal on the black sports car. She glanced at the dashboard digital clock and asked, “How much farther?”

Dough struggled to keep her composure as she glanced at the smartphone. “About six blocks down, then make a right on West 114th street. The fraternity house will be on your right.”

“Hold on, sis, and pray that all these lights stay green.” Ignoring the street speed limit, she sped through uptown Manhattan and drew a few fingers, shouts of profanity, and the dreaded “Go Back to Jersey” expression from pedestrians. She raced on regardless. Nothing would stand in the way of reaching their target.

“There!” yelled Dough and pointed to the green-and-yellow three-story brownstone. “That house fits the seer’s description.”

“Hey, Bhagwan!” groaned Cookie in her childhood tongue. “They’re throwing a party. How are we supposed to find parking in all this? We can’t even double park.”

Her twin glanced around and located a spot. “It has to be at the fire hydrant. If the car gets towed, Gypsy will have to get it at the pound, but she’ll understand. We need to find and rescue this Jasmine girl.”

They parked the car and raced to the fraternity house, which was bursting at the seams with partygoers and shook with each beat of the music’s bassline. Those windows facing the street glimmered with multi-colored strobe lights to reveal college kids dancing wildly. The front door to the brownstone—its only entrance—was jammed with folks trying to get in, while a few others lay drunk on the floor.

“How are we supposed to get through that?” asked Dough.

“We push our way through.”

She turned to her sister. “It’s risky to use our gift in public, but you’re right. I see no other way.”

Cookie lifted two drunk frat boys, one with each hand, and prepared to fling them over the railing of the front steps when she stopped abruptly. Both sisters turned to each other as shivers slithered down their spines. Danger was imminent and they both sensed it.

Her sister nodded as she dropped the two partygoers with dull thuds. “But where could he be?”

They glanced around and attempted to sync their sight to what they sensed. Seconds later, the sisters stared instinctively at the large tree across the street, which obscured two figures. They perceived a familiar yet alarming faint glow and beside it, a scarcely visible girl who laughed obnoxiously.

The young woman could barely stand and struggled to hold onto an unusually tall man. She continued to laugh as he whispered in her ear. “Did you give me something? Because,” she spluttered and hiccupped, “I didn’t have a thing to drink but I’m completely out of it. And why do you seem to be glowing black?”

In a low but guttural voice, he said, “That’s because you’re drunk with the words of my mouth.”

The girl laughed and spat loudly, “Drunk with your words. Oh, that’s as hilarious as your name, Methi!”

When they heard the name Methi, Cookie and Dough knew it was the Nephilim called Intoxication, one of the Maladites. As one, they yanked crystalline blades from their back straps and rushed forward to attack.

The man sniffed and turned his head quickly towards the approaching sisters. Without hesitation, he drew a long steel blade sheathed at his side and with a swift thrust, he plunged it savagely into the girl’s chest. A vicious smirk settled on his face and he called to the women, “You’re always a step behind.” Suddenly, a large, swirling light appeared behind Methi. He dropped the girl onto the street, backed into the light, and disappeared.

They reached the tree and checked on the girl, who lay choking and spitting up blood.

Dough dropped her blade, knelt, and placed her hands over the wound. Her eyes widened at the sight of the name charm on the necklace around the girl’s neck—Jasmine. With a sigh, she looked at her sister. “It’s her.”

“We have no time to bring her to May. The hospital is a block away. Let’s take her there.” Cookie proceeded to bend to help her sister but Jasmine’s ragged breathing suddenly stopped.

“It’s too late. She’s dead,” uttered Dough with her fingers pressed to the side of the girl’s neck.

Cookie sighed in frustration and threw her blade furiously on the ground. “Damn it!” She placed her hand over her forehead. “What was the name of the other girl in Tassel’s vision?”

“I don’t remember.” Dough shook her head. “But I know it’s a girl from the Bronx. She’s not in immediate danger but I swear we’ll get to her before they do.”

The sisters didn't get to their first target on time. It sounds like the next potential victim is where the rest of the story unfolds. Keep an eye out because The Progeny Wars Book 1: The Daughters of the Watchers is available on all devices starting tomorrow December 31, 2021.