The Uncommon Rider Snippet #2 Is Here! 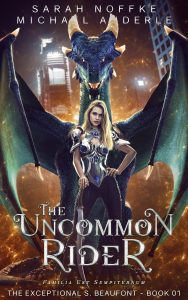 The Uncommon Rider Snippet #2 Is Here!

Don't hate me when you get to the end…

On the edge of a giant’s yard, in a city that was never quiet, the first dragon’s egg in over a century began to hatch.

Sophia Beaufont sucked in a breath, watching as a large crack started at the top of the blue egg and split down the side.

The full moon was the only light in that area of the yard, showing the progress the dragon made as he worked his way out of the eggshell, making a strange noise that wasn’t music and wasn’t crying. It was the sound of birth. Of awakening. The echo of the soul of the dragons that lived deep in the consciousness of the creature taking his first glimpses of the moon rays in this lifetime.

Only a few months ago, Sophia had found herself in a strange magical shop, among mortal dwellings. That’s when she’d magnetized to the egg before her, sealing her fate.

A dragon hadn’t magnetized to a rider in a hundred years. Dragons were actually thought to be extinct. But the truth was, there had simply been little reason for them—until now.

The time of the dragon riders was starting anew. And only a few knew that it was being reborn with the gentle cracking of the shimmering blue egg sitting on the soft patch of ground before this young girl now.

Sophia and the egg had both grown at alarming rates since magnetizing to one another. She had always been well ahead of her age, but now her body had caught up with her.

Losing her childhood hadn’t mattered. Having her fate chosen on a random trip to a shop, hadn’t bothered her. It all made sense from the beginning—because Sophia Beaufont always knew she wasn’t a normal magician.

Most don’t come into their magic until they’re older, in their teens at least. Honing those skills takes time. None of that had applied to Sophia. She might have been born to parents who she couldn’t remember—taken from the Earth when she was only three years old. She might have spent much of her childhood alone. But she was no victim. From the beginning, Sophia knew that her life wouldn’t take a predictable course. And at this point, there was absolutely no certainty in her future. But she knew something with true conviction—one day, she wanted to be like her big sister.

Without knowing why, Sophia was positive that the dragon quickly breaking out of the egg had chosen that night in particular to hatch for a specific reason. Over the last few months, Sophia had spoken telepathically to the dragon. Hearing him in her head had felt second nature. Right then though, all her attention was on the cracking that seemed to echo so loudly she thought everyone nearby could hear it.

However, no one approached as the dragon poked his head up through the top of the shell, knocking a large piece out of the way. He swept his neck to the side, breaking out of the bonds that had held him for so many years. Had it been a decade? A century? A millennium? Sophia didn’t know. The dragon had simply said, he had been waiting for her to be born—to be ready.

She reached out, wanting to help with the arduous process, but pulled back her hand, sensing that wasn’t her job. The dragon, she knew so well and was meeting for the very first time, threw his head covered in small horns down and to the side, smashing the rest of the shell to bits. His tail whipped behind him, knocking the back of the egg to dust at once. He shook like a dog, shuddering off the rest of the shell. It was then that the moon light shined down, properly showing the entirety of the dragon.

She’d never seen a blue like what covered him. His scales were sapphire, dipped in crystals, radiating the light.

This girl didn’t know what it felt like to be in love… until that moment. She knew, at her core, that she loved the creature before her with her whole heart. He was good and brave and undeniably connected to her in every way for the rest of their lives.

This dragon would be her life force and she his. Neither could prosper without the other. His aches would be hers. Hers he’d feel intimately. A rider and its dragon signed on for more than a long life of sacrifices and challenges. They signed on to experience everything exponentiated.

The dragon stood, steady as if it wasn’t his first time. He took a step, no falters as he lowered his green eyes, blinking at the young girl before him. He only came up to Sophia’s shoulder, but he was growing moment by moment.

She took a step forward, not feeling steady, but hiding fumbles.

“And so we meet, like it’s the first time,” the dragon said.

“Isn’t it?” Sophia asked, running her eyes over the dragon as he tested his wings, with a sticky sound, unfolding them and then pressing them back beside his body.

He shook his head. “Oh, no, we’ve met many a times, Sophia Beaufont. Or so I believe.”

She nodded, turning her gaze to the moon. “Why tonight?”

A pleasant expression fell on the dragon’s face as he followed her gaze. “Each dragon is connected to an aspect of the Earth, whether it be night, day, the ocean, the winds—”

“The moon,” Sophia said, sudden realization dawning on her.

“Yes,” he affirmed. “For however long we have here, I’ll be strongest on the full moon. And so will you.”

Sophia took a step forward, kneeling down and looking up at the dragon before her. He was more beautiful than she could have ever imagined, full of timeless wisdom. It was impossible to think that the consciousness of the dragons lived in him. And yet, as she stared into his eyes, she could hardly doubt it.

“It’s time to name me, Sophia Beaufont. But do it with diligence.”

She lifted her hand, not hesitating before running her fingers over the top of his snout. Her hand sank to his scales at their first meeting, the union as natural as a baby’s first breath.

Sophia smiled, unafraid, as she stared into the eyes of the most ancient type of magical creature in the world—and the one that would live beside her from now until the end of her own life.

“I named you long ago,” she began, her eyes dimming from the bright moonlight. “Even before I met you. Before I became a dragon rider, I knew you. And I knew that you’d be <REDACTED>.”

The blue dragon bowed his head, a silent respect in the movement. “Yes, my name has always been <REDACTED>. But only my true rider would know that. Well done, Sophia.”

Ok, Ok, I know. I want to know the dragon's name as well. I have some ideas. What are yours?

If you pre-order the book, the moment it's released you will have it in your e-reader and you can go to the end of chapter 2 and find out the name. 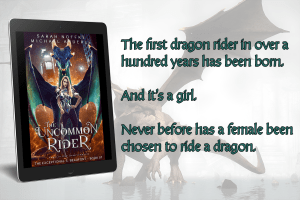