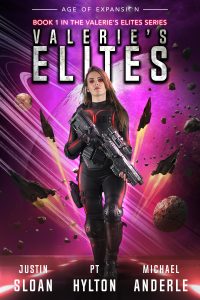 At the name, the aliens’ postures instantly got less aggressive and they looked at her with wide, intrigued eyes.

“You… You think you can compete in the Damu Michezo?” the lead one asked.

Valerie had to laugh. “I’m pretty sure I’ll be fine.”

The alien cracked his neck, pounded on his stone carapace, and said, “Show me.”

“You beat me, I’ll point you in the right direction. In fact, there was a shuttle headed for the planet it’s held on not long ago. You might still be able to catch it, or at least chase it down and follow. Are you up to it?”

Robin smiled at Valerie, then shrugged and took a step back.

He scoffed. “I’ll tell you a little secret…no one has ever hurt me. You? I won’t worry. Come.”

Valerie tossed her rifle to Robin, and then her sword. She heard pounding and she turned back to see Qwaza charging damn fast. Valerie had fought her fair share of vampires and Weres on Earth, so she was used to speed. With a quick sidestep, she brought around her leg to sweep him. What she hadn’t counted on was his next move, which involved a fast sideways roll to compensate for her new location. He came up like a boulder, unraveling as he regained his footing, and slammed his forehead right into hers.

Red spots filled her vision, and it wasn’t only because her eyes had started to glow red. That fucking hurt!

When Qwaza next moved, Valerie didn’t take any chances. She dodged to the left and tried pushing fear, only nothing happened. The alien kept charging forward, and she realized that it wasn’t putting off an emotional aura that she could sense—another difference from back home.

He was fast, and apparently immune to her special abilities. That meant she would have to take him down the old-fashioned way, with a straight-up butt-kicking. He plowed into her again, but this time she went with it as her martial arts training back in Old France had taught her. Using her opponent’s strength against him, she twisted his arm behind him and slammed him headfirst into the nearest tree. The trunk cracked, dangerously close to snapping in half.

It wasn’t like she was trying to kill him, but she also wasn’t about to let this guy win—not when her mission depended on it. Without hesitation, she kicked out his leg so that he plowed into the ground head-first.

He growled, trying to spin and get to her, but she was too fast. In the time it took him to maneuver around her she had delivered two knees, an elbow to the temple, and an uppercut to his jaw.

Valerie started to raise her fist in victory, but the alien pulled something sharp from within his carapace—a stone knife. He was up and slashing before Valerie had time to fully process it, and one slash caught her across the cheek. She slammed her forearm into the back of his wrist, knocking the knife from his hand, and then delivered a roundhouse kick so powerful that it cracked Qwaza’s carapace and sent him reeling backwards.