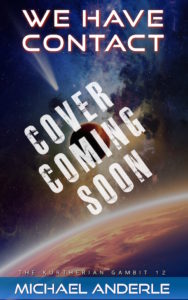 President Theodore of Germany nodded to those he had met previously.  While the Prime Minister of Japan wasn’t someone he had met, yet, he was happy to see him here.  As far as Theodore knew, he was the only Asian country represented.

He shook hands and others spoke with the American President and the leaders of France, England, Spain, Brazil, Mexico, Australia, Japan, Canada, Netherlands, Israel, India, and Italy.  Some of the most economically powerful countries and more open countries on Earth.

He noticed that Russia and China had not received an invitation.  While China wasn’t a huge surprise, he wondered what the Russian’s had done to piss off TQB.  He would have to remember to ask Max about that once they got back to Earth.

The meeting room was impressive.  It was a small amphitheater.  There was a table at the base that held twelve, if you put people on the end, or you could fit five behind it if they were going to speak to the five rows of seats going up the incline.  The wall at the front had multiple video screens.

He did a quick count of the seats, it could seat about a hundred and fifty.  There were a few men and women in the room, pulled from multiple nations serving beverages.  The invited guests had been all offered rides to the meeting room.  While he was happy to not have to walk the hundreds of feet from the landing area to this room, he was sure Max was wishing for a more leisurely stroll down the walkways to see more.

It wasn’t every day you got to gawk at a real spaceship.

There was a commotion behind him, so Theodore turned to see a younger aged man entering the room and making the rounds.

“That’s General Lance Reynolds,” Max spoke to Theodore quietly, “He is the COO of TQB Enterprises.”  Theodore looked to Max and raised an eyebrow in question, “He was an American army general before he retired to take this position.”  Max turned his eyes towards the new man, “Our pictures of him, even a few years ago, show him to be much older than this gentleman here.”

“But, it is him?  Your group is sure?” Theodore asked.

“Yes, it is him. TQB has medical abilities we can’t comprehend at this time.”  he looked around the room, and Max sighed, “Like so many other abilities.  I hope we get some answers.”

The German President pursed his lips, “That makes two of us, my friend.”

“Welcome, Mr. President,” Lance held out his hand to the man who would have been his top boss a few years ago.

“Then you can call me…” the President started before Lance cut him off.

“Mr. President,” Lance shrugged, “maybe when you are out of office.  Old habits and all.”

The President nodded his head in understanding, “Then you really are General Lance Reynolds?”

“Why wouldn’t I be?” Lance looked at him confused, “Oh, the younger handsome face?” he asked and smiled, “Benefit of the job. TQB didn’t want me figuring out how to fix everything only to keel over and die when I just got it all working.”

“That seems rather practical,” the President agreed.

“Yes, the CEO can be practical at times, I understand you met her?”

“Yes,” the President nodded and realized that he had a small group surrounded them now, “I’ve had a couple of meetings.”

“How did those go?” Lance continued the conversation.

The President realized that Lance was giving him the opportunity to tell those listening, his opinion from first-hand experience. “The first meeting was a little short, but it helped point out a few bad apples in my team.  The second was a bit more eye opening.  I imagine,” he nodded to the members listening in, “that the information she supplied the second time was as hard to swallow for these members here as it was for me.”

Lance heard one person mention ‘Pandora’s Box’ in the crowd.

“She does have a way of delivering what you need, not what you want,” Lance commiserated, “my first few jobs were a little less than enjoyable, lot’s of air time traveling around the world.”

The President looked up to the ceiling then around the room, “I’ve seen some of your technology, I can’t say that it is all that bad.”

Lance laughed, “This was hardly what we had in the beginning!”  He looked to those listening, “I flew regular jet in the beginning, this stuff came along later, much later.  My ass felt pretty damn tired after the first quarter-million miles, let me tell you!”

A few chuckles came from other people who had to fly a lot in their roles.  It seemed glamorous to travel the world, but even personal jets got old after enough trips.

“I can imagine,” the President admitted.

“I’m telling you,” a female’s voice cut through the conversation the men were having, “that there is not a smell worse than a dirty diaper anywhere in this solar system!”  The twenty-eight members watched, some with smiles recognizing the truth of the statement as two men in black uniforms with small white-fanged skulls on a red background came through the doors.

No one missed that they quickly glanced around the room nor their small smiles on their faces.  Apparently, their charge was known for speaking her mind.  Most of the leaders in the room quickly tried to remember what their rehearsed introduction would be when they finally met the lady on the throne, so to speak, of TQB Enterprises.

Then, she came around the corner and smiled to the whole group, most forgot what they were thinking for a moment.

FROM MICHAEL >>> Whoo, here we go again, folks!  The first 5 chapters are out…Back to me (I'll send back in a few minutes) and next week I hope to finish another 40,000 words and wrap up the writing within 10 days…Then a few for editing and out before the end of the month – Central Standard Time for you Aussies ;-).

This is a really busy month.  We have twins still at the house starting school soon (their senior year), they have birthdays in a week and lots of work related travel for my wife.  Can I admit how much I'm looking forward to school time?  🙂

Now, if the guys would just have straight ‘A's this whole year, that would be really, really appreciated!  I wouldn't have to get into their study habits, and they wouldn't get annoyed with me getting involved with their study habits.

Have you read The Boris Chronicles?  Retaliation is out now (No 2) – check it out if you want something fun to read!

Chat at you later,