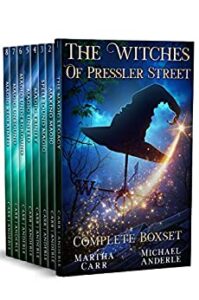 The Witches of Pressler Street:

Witches are being murdered in Austin. But how do you put the monster back in the vault? The three witches of Pressler Street are the city's only hope but they are running out of time. A deadly creature has been locked away for millennia in plain sight. But big sister, Laura accidentally set the creature free and no one remembers how to put it back. Find the witch-killer and stop its path of destruction on Austin. But what spell to use? Can the sisters figure it out?

Better hurry! He’s gunning for the Hadstrom sisters first. Time to come together and finally learn how to blend their unique powers into something new. Can the sisters come together to save their fellow witches and save themselves? 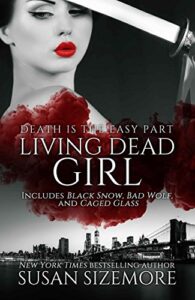 Serafina Raider did not volunteer for the job of ghost hunter.  Instead she was murdered and magically returned to her body to take up the role of defending the world against evil spirits.

But in BLACK SNOW she does accept the task of hunting down a serial killer even if ghost hunters are specifically forbidden from interfering in mortal affairs. In BAD WOLF, Serafina must take on the escaped ghost she has tracked and trapped before. Only this time the danger is worse. In CAGED GLASS Sera knows she must finally defeat the ghost of her mother. Sera would rather be running a restaurant instead of ghost hunting with her partners, Devan and Tony. But defeating the ghost with traditional methods proves impossible. 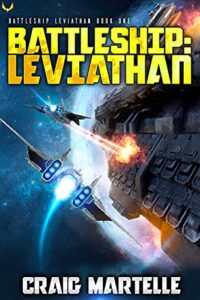 A derelict warship, ancient but still alive. A small team of humans fighting for all humanity. Built for a time when the races were just finding their way to the stars, finding that they could dominate others. The galactic conquests created the arms race and the ancients, the Progenitors had to protect their own. They built a ship to drive the others away. It worked. And it didn’t. The Progenitors abandoned the galaxy to the newcomers, leaving relics behind as monuments to their failure.

Humanity spread to the stars and ran headlong into the established races. A new war begins, and no one conducts war better than humanity except for the Blaze Collective. The two go head-to-head while humanity frantically searches for something to give them an advantage. Ancient technology. The derelicts scattered across the galaxy. Gutted and useless. 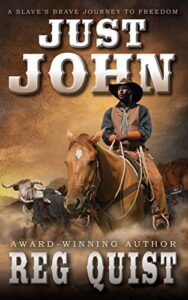 In return for his freedom, a slave is tasked with the job of delivering a valuable stallion to a horse farm in Tennessee. The Civil War is dying down and the roads are dangerous but with some help the horse is delivered and the slave sees freedom.

Wishing to be freed from any remembrance of the slave farm, John has a last name that he refuses to use. John’s skill with horses opens doors for him which eventually take him to Fort Worth, Texas. More open doors, over a period of years, find him on a cattle drive to Montana, followed by a second drive into Alberta, Canada. From there, he chooses the name Ware. John Ware stays in Alberta, where he becomes a much loved and respected Alberta rancher. 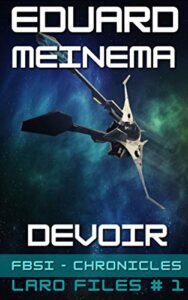 It seems like a simple assignment for two experienced Special Space Agents. On Affix, one of the two moons of Viridis, the most distant planet in the human-explored and inhabited part of the universe, Monterrey and Xiaobo, two agents of the Federal Bureau of Space Investigation, are hunting a fugitive. The FBSI agents expect to get the job done quickly. Until it turns out that several more parties are involved in the manhunt. And not all of these parties are human … When an ancient secret is also uncovered, a dangerous cat and mouse game is created. A game of life and death. To survive, criminals and men of the law have only one choice. They must work together to defeat the unknown enemy. Collaborate with someone they don't trust. 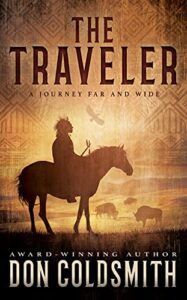 In childhood his name was Woodpecker. Now, he is the Storyteller, weaving long-ago tales and trading as he traverses the lands of the People. Married to the beautiful Plum Leaf, the Storyteller sets out on the great adventure that will be his own life. He witnesses the changes the white men have brought – the taking of scalps, the preying of brother upon brother, the knives made of shiny, smooth metal.

He journeys far and wide, to the land of the buffalo and to the heart of an enchanting young captive named Pale Star, who will be his shining light and destiny in the dark days ahead. He is known by many names to those he meets in the wilderness: Storyteller, trader, Traveler – and one day he will become a legend as the half-man, half-spirit called the Watcher.

This month we’re headed into the fantastic. Click the super-secret link below to see a hidden portal’s load of Fantasy books.If science fiction is about the possibilities, then fantasy is about impossibilities. Dragons wheeling overhead as wizards exchange fiery salvos. Swords bequeathed to unexpecting ordinary folk to set them on their road to greatness. Fantastic creatures, familiars and more.An escape from the real world into something glittering and larger than life.From Robert E. Howard to JRR Tolkien, the fantasy masters took divergent paths to deliver us where we are today.Sword and sorcery didn’t resonate in the 1930s when Conan wore the crown of Aquilonia on a troubled brow. By the 1960s, hobbits, elves, orcs, the undead, wizards, and a dragon fought an epic war beyond the understanding of common folk.Epic is the right word as small decisions led to brave actions that changed the course of fantastic histories.What do we have today? Smaller scale, grander visions, still epic and all free. Sink your teeth into this collection and find your next favorite fantasy author, right here. 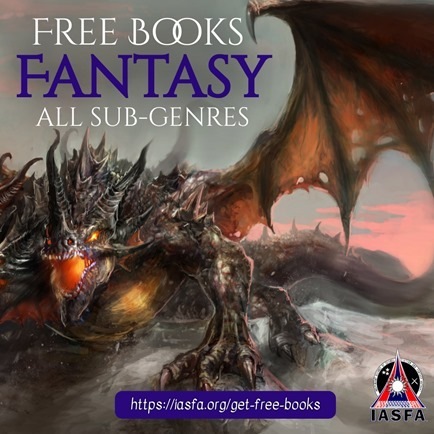 There’s Fantasy in there! Come on board today and see what there is to see, find new worlds to explore and new people to befriend. October is Fantasy month, at least for the IASFA.Find your new favorite author with this massively huge selection of Fantasy books (all sub-genres) that you can try at no risk as they are all free, but only for a limited time. October 12-16. Join our newsletter and you, too, will see what there is to see.Available only from the IASFA (International Association of Science-Fiction & Fantasy Authors). You can’t get there with one click because we’re fighting the scum of the wasteland. Here is what it takes to get you to your free books.
1) click this link https://iasfa.org/get-free-books/
2) Become an Insider by filling out your name (or online persona) and email address
3) Answer the math problem because we know ravagers suck at math
4) Check your email – you should have received a confirmation email thanking you for subscribing, but you have to click on this to confirm your confirmation because we know that is the kiss of death for scum-sucking bottom feeders
5) Your subscription is confirmed! Go back to your email for the final confirmation which, during the free promotion period, will include the super-secret link that takes you into the back-end of the site where you can find incredible titles from some of the top names in the genre as well as established newcomers. If you join before the promotion timeframe, then you'll get an email on the first day of the promotion with the super-secret link.

If you see this message after October 13th and want to be notified of future price promotions, please sign up for our newsletter at www.lmbpn.com/email.