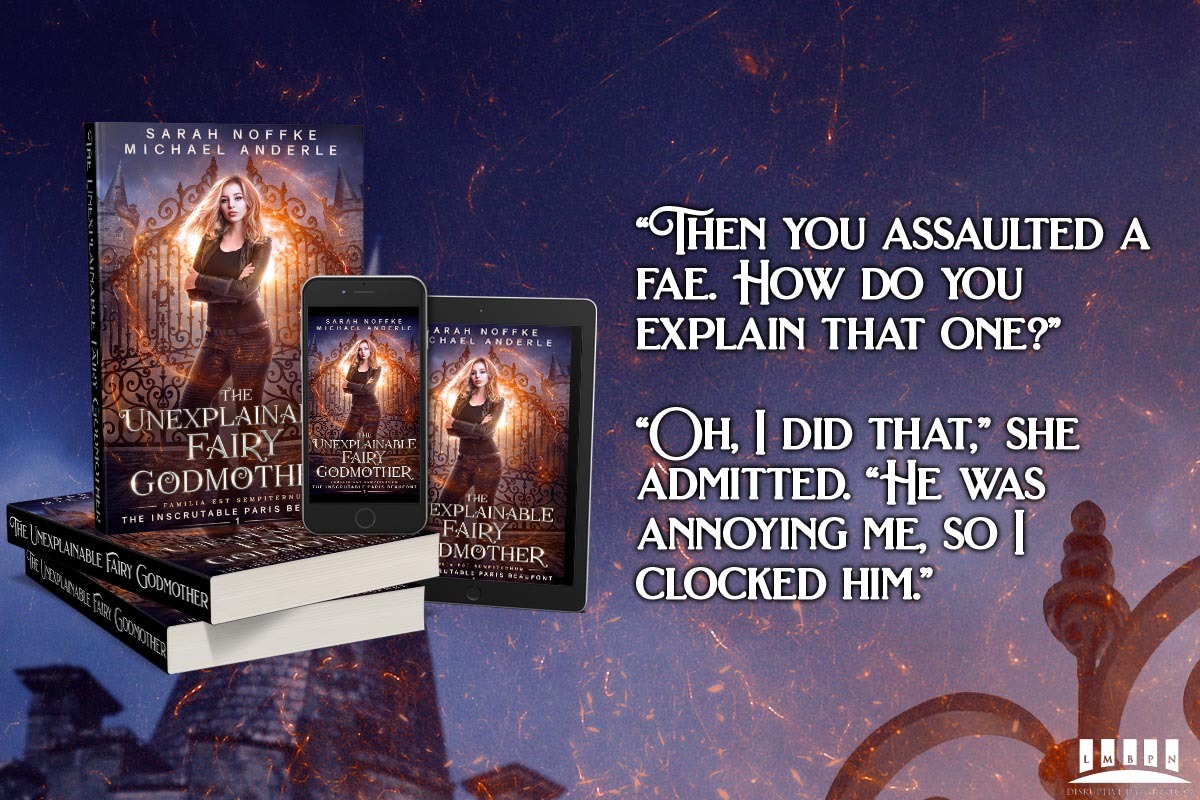 Fairy tail love stories aren't what they use to be, what the fairy godmothers need is a magical criminal who hates love.

If love was what made the Earth go ’round, then it was about to freeze on its axis. Few people knew the repercussions of love being created or, more importantly, of love being lost.

A fairy godmother knew. It was her job to ensure matches were made and love achieved. The problem was fairy godmothers weren’t what they used to be, and it was creating a domino effect across the globe.

Marylou Goodwin stood behind a concrete pillar in the London Underground. She wore a long blue gown with a hood over her gray curls to keep the cold chill off her shoulders and head. She wore it like that for practical reasons but also to keep her cover. It was always better if fairy godmothers weren’t spotted by those they were spelling.

The old fairy godmother had been patiently waiting for her “Cinderella” to arrive on the platform. Hopefully, the woman, a Miss Amelia Rose, would show soon, or the timing of matching with her Prince Charming would be off. Also, Marylou’s feet were throbbing from standing for so long. She wasn’t as young as she used to be, and she felt her age more with every case.

“I’m getting too old for this,” she muttered under her breath, willing the blood in her feet to circulate as she toggled her weight between them.

The truth was that Marylou had been old when she became a fairy godmother. Most were, and after a few centuries of matchmaking, this tired fairy godmother was out of stamina. There were bigger issues as well, and they were about to become very apparent for the rest of the world.

“Oh, about time,” Marylou said as she caught sight of Amelia Rose striding down the walkway to where her train would be stopping in five minutes.

The Cinderella was on her cellphone chatting with Bryce Tyler, the man who had been pining for her affection since they graduated from college last year. Her long blonde hair was pulled back in a braid, and she had only a small bit of makeup adorning her face.

Amelia forced a smile, which on her elegantly beautiful face still lit up her large brown eyes even though it was absent of any joy. Her words were barely audible over the clacking of her smart high heels and the rush of the other trains on neighboring platforms.

“Yeah, I’ll talk to you soon,” she replied to the guy on the other side of the line after a pause. The smile on her pink lips disappeared. “I miss you too.”

She didn’t. Marylou knew that much. Bryce Tyler’s mother missed him. The friend he’d had since preschool missed him. His sister who worried he’d never get married missed him. But Amelia Rose had never missed the redheaded financial advisor, even though she appreciated his friendship.

Lasting relationships were built on friendship, but more importantly, they started with a spark. Those relationships that made the world go around, anyway.

Amelia Rose ended the call. Her lack of enthusiasm over Bryce Tyler was heavy on her face as she passed a well-dressed man standing on the platform, his attention on his own mobile device.

Marylou twirled her finger around and pointed at the two from her hiding place behind the pillar.

A handkerchief slipped from the back of Amelia Rose’s purse and gracefully floated to the concrete, where it landed close to the man—Mr. Grayson McGregor.

The old “drop the handkerchief” technique was tried and true, and Marylou had used it for centuries to get the attention of a Prince Charming for one of her Cinderellas.

To the fairy godmother’s surprise, Grayson McGregor didn’t notice the handkerchief. Marylou sighed. She hoped this wasn’t going to be as difficult as the last case. She poked her wrinkled, bony finger in the air and stirred the embroidered handkerchief around the legs of his slacks.

That got his attention. Grayson glared down and picked up Amelia’s possession. He was eyeing the initials when Amelia spun and spied him with her handkerchief.

“Excuse me.” She strode back in his direction and reached for the linen square. “That’s mine.”

He brought his blue eyes up and smiled playfully pulling the handkerchief out of her reach. “Can you prove it? What are your initials?”

She sighed and looked for the train. She’d be late for work if it didn’t get here soon. One more time and she’d get fired. “They’re A.R.”

She frowned. “Those are my boyfrie—friend’s initials.”

“Well, is he a friend or a boyfriend?” Grayson still held the cloth, a flirtatious expression dancing in his eyes.

Amelia narrowed her gaze at the stranger—her one true Prince Charming.

Marylou let out a frustrated breath. This wasn’t going well…again. She wisped her finger in a small gesture and made a gust of wind take the handkerchief from Grayson’s fingers and send it down the platform.

Amelia regarded him incredulously when he simply watched it fly away.

“Well,” she said in a demanding tone. “Are you going to get that for me?”

He glanced in the direction of the handkerchief flying down the Underground, their train speeding in their direction. “Sorry, but my train is coming, and I can’t be late.”

Amelia’s mouth popped open. “But you lost it.”

“I’m wearing heels.” She pointed at the red heels that matched her striped skirt and blouse.

“Well, I don’t know why your impractical decisions have to affect me,” he countered, anger flaring on his face.

She balled up her fists, her face growing as red as her shoes.

Grayson rolled his eyes. “Oh, fine. But I better not miss my train.” He sped off, racing after the square of cloth flying on the wind directed by Marylou. By the time he’d recovered the handkerchief, the train had come and gone, but Amelia had stayed, growing more furious by the second. She couldn’t lose Bryce’s handkerchief. It meant something to him. However, now she was late.

Marylou knew that if the two shared a taxi, they would feel the spark, and the rest would be history.

Grayson threw up his chin, the handkerchief crushed in his hand. “Seriously? I missed the train! Not today.”

He cut his eyes at her hand and then her face. “Well, my apologies. Maybe I can offer you a job at my company, McGregor Technologies.”

She blinked at him. “McGregor Technologies? That company turned me down for a position last year when I graduated from college.”

He was supposed to offer her a job, and she would accept, and they’d work together and fall in love. From the angry expression on both their faces, romance was not budding between them—the exact opposite. There was a fine line between the two.

He shrugged. “We like our candidates to have experience.”

“I have experience!” she argued. “Plus, I’m a quick learner.”

“But you’re not quick on your feet,” he pointed out between breaths, taxed after the run to get Amelia’s handkerchief.

She yanked it from his hand. “Do you always insult people whose stuff you take?”

He grinned at her. “I didn’t take it. You dropped it. So you make poor clothing choices, can’t run after your own things, and you lose stuff. Never mind the job offer.”

Amelia’s mouth formed a hard line. “What is your name?”

She nodded. “Grayson, consider yourself warned. Your company is utter rubbish to me.”

The guy laughed, his teeth perfectly straight on the top and cutely crooked on the bottom. He was very handsome, with his short brown hair and boyish dimples. “And who will I have the pleasure of attributing my downfall to? If it happens.”

She started down the platform, her heels clicking against the concrete. After a few steps, she whipped around and narrowed her eyes at him. “Amelia Rose. One day you’ll hear my name and know I’m the one who undercut your prices, stole all your customers, and sank McGregor Technologies.”

“I cannot wait, Amelia Rose. Bring it on.”

The two stormed in opposite directions, each raving mad.

Marylou groaned and leaned against the pillar. The thing about a spark was it had the potential to ignite a brilliant love affair or to burn the bridges between two lovers. It was a delicate balance, one a fairy godmother was supposed to be good at keeping. It appeared, yet again, that Marylou Goodwin had failed. She knew the repercussions of Amelia and Grayson not falling in love would have far-reaching effects and would undoubtedly hurt the world at large.

They are right about the fine line between love and hate. Without love what will happen to the world, will the balance tip in the opposite direction? Find out March 19, 2021 when The Inscrutable Paris Beaufont Book 1: The Unexplainable Fairy Godmother is released, or head over and pre-order it today! 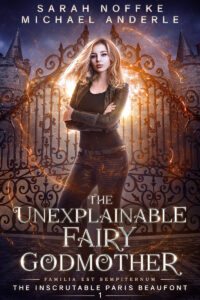