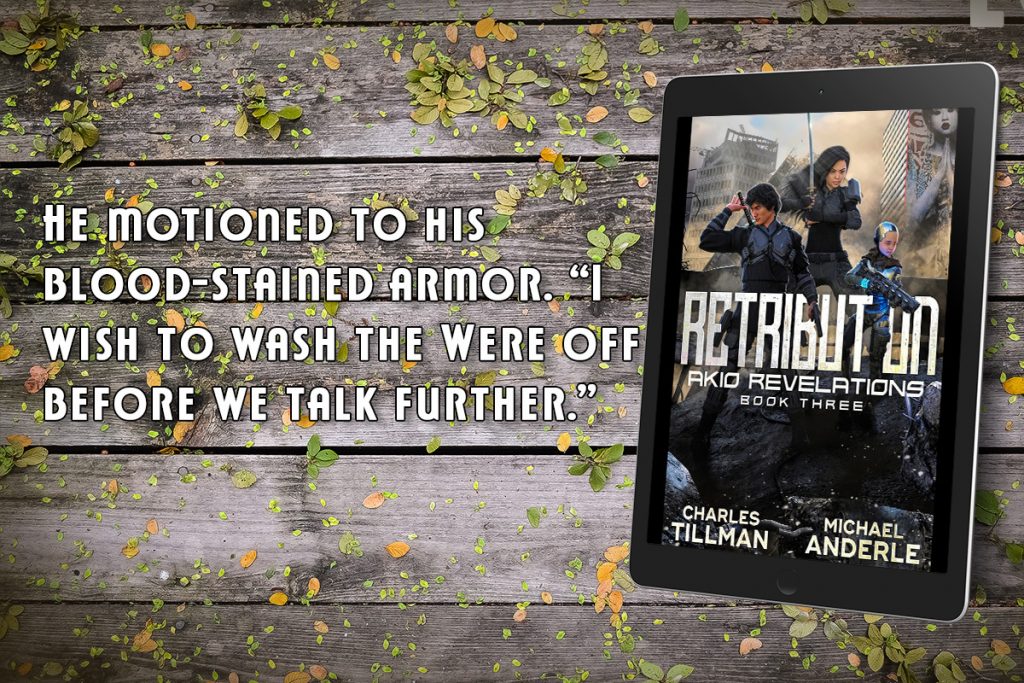 After landing in the courtyard, Akio led Kenjii into the office building. They approached an elevator that had opened on its own and entered. Kenjii felt the lift descend a short distance, then the doors opened into a well-lit hallway with no visible openings.

Akio led him to a wall at the end of the hall and placed his hand on a blank spot at chest height. The area underneath lit up briefly and a section of the wall slid open, revealing another elevator. Kenjii looked askance but remained silent as the older vampire motioned for him to enter.

The door slid closed once they were inside, and Kenjii started as a voice filled the space. “Welcome, Akio, and congratulations on a successful mission.”

“Thank you, Abel. This is Kenjii. Please grant him level one access.”

“Level one access confirmed. Welcome to our home, Kenjii. It is good to meet you finally.”

The new arrival’s eyes widened as he looked at Akio.

“This is Abel, the entity intelligence who runs our base. He has been helping me search for you since you came out of the rubble at Acheng,” Akio explained.

“Oh. It is nice to make your acquaintance, Abel,” Kenjii hesitantly answered.

The lift descended as Kenjii looked around the chamber. “This is amazing.” Kenjii waved his arm, indicating the featureless box. “Where are the controls?”

“I handle all access to and from the base areas,” Abel announced over the speakers hidden in the ceiling. “All areas of the building designated as TQB territory are secured and monitored at all times.”

The doors opened onto a long hallway with doors spaced along each side. Yuko was waiting to greet them.

“Hello, Kenjii. This is the residence level,” she explained as she took the lead. “The common dining room is through here, and our training area is across from it here.” She pointed.

“The rest of this floor contains living quarters for us and two of our associates. You’ll meet them later.” She stopped in front of a door that opened without her touching it. “This is my room, and Akio’s is across the hall.”

“Are the doors on motion sensors?” Kenjii asked as he looked up, searching for a sensor.

Abel answered, “I have sensors and video throughout the entire base. Nothing moves that I don’t see.”

Akio chuckled. “Abel likes to show his superiority to us mere mortals from time to time.”

“He’s an EI. Think of him as a supercomputer on steroids.”

Kenjii nodded. He knew what a supercomputer was but withheld further questions.

“Would you like to clean up?” Yuko asked. “Each room has a personal bath and shower.”

Kenjii looked at his tattered and bloodstained clothes. “Would you have something a little more presentable for me to change into? I think these clothes could walk on their own.”

Akio smiled at his friend. “There’s something in your size waiting.” He walked past two more doors to a third on the same side of the hall as his. “This space is available if you would like it.”

Kenjii walked into the room and froze. He wasn’t sure what he’d expected, but the room was as nice as any five-star hotel he had ever seen before the world went to hell on the WWDE.

The room had a plush carpet on the floor and a king-size bed that looked sinful after spending the last twenty-odd years sleeping on a military surplus cot in a room carved into a mountain. A large flatscreen monitor on the wall caught his attention.

“Is that a television?” he asked in wonder.

“Hai. The base library has a full collection of movies and television shows from the last century up to the WWDE. All you have to do is tell Abel what you are interested in, and he will find it for you. The same goes for any music you would like to hear.”

“How is this possible? We had a generator and solar in Acheng, but nothing like this.”

“Japan didn’t suffer as badly as the rest of the world did on the WWDE. Mainly because they wouldn’t use foreign-made computers and also because we protected the country from the bombs that flew,” Akio explained.

Kenjii nodded at this, adding it to the list of questions that was getting longer each minute. “You said there was a shower?”

Akio smiled again, looking forward to his reaction to that. “Hai, it's through that door.” He pointed as a door slid into the wall, revealing another area.

Kenjii walked through the open door and found it was a vanity with a mirror over two sinks on one side and a large walk-in closet on the other with another closed door at the end. When he approached that door, it slid open to a room that took his breath away. A huge glassed-in shower with nozzles lining two walls and a large round one coming out of the ceiling greeted him.

Akio chuckled. “I take it you like the accommodations?”

“Please tell me you have hot water. Not that I wouldn’t be okay with cold, but…”

“I assuredly have that. What kind of establishment do you think I run here?” Abel interrupted with an offended tone.

“Many apologies, Abel. I don’t wish to offend. It’s just been decades since I had a proper shower,” Kenjii replied.

“I will leave you in Abel’s care. Take as long as you like since there is no shortage of water. If you need anything, just ask, and Abel will either direct you to it, or a bot can deliver it,” Akio told him.

Kenjii caught his hand as he turned to leave. “Will you…will you be available when I’m done?”

“Hai.” He motioned to his bloodstained armor. “I want to wash the Were off before we talk further.”

“The closet has clothing that should fit you, and I will be here when you’re done. We have a lot of catching up to do,” Akio assured him.

LOL I think I would feel the same way if I had to deal with cold baths for more than 20 years! There's a lot more to discover, and experience, with Retribution, available on pre-order now! Live this Friday! 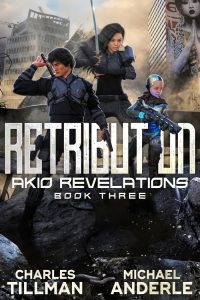