Sacrificing yourself to save your friends is the only choice that makes sense for Ben. However, this choice changes his life in more ways than one.

It was a near-death experience, but I hoped I’d wake up as a medium just in time for high school. Turns out it just wrecked my legs. And I’m something else. A summoner.

I know next to nothing about my talent besides portals and pledge bonds. It’s okay, they teach it at school. Sounds perfect, right?

The other summoner in my class, Mateo, hates me. The class clairvoyant thinks destiny has got it out for me, too. Makes sense—my portals break stuff and go to the wrong realm. And I already felt like a square peg, getting around on crutches.

At least I’ve got help from family, friends, and a celestial called Arie. Good thing because it takes constant rehab just to keep my busted body working.

But how do I fix my broken talent?

I first saw into Benjamin Endor’s mind while he slept.

He wasn’t dreaming, and I hadn’t walked in on a nightmare. Most of those don’t start so brightly. It was a memory. Of him with two other extrahumans on a sidewalk in Salem.

The air was pleasantly cool and soft. Buds on the trees whispered of spring. Ben’s eyes stung with too little sleep, but pride held his head and shoulders high because he kept company with two heroes, Mavis Merlini and Edward Redford. The pack they all belonged to spent the night saving three entire worlds.

Ben wasn’t the youngest member of Mavis’ strange pack of assorted extrahumans, but close. He thought he hadn’t done much besides getting seasick into The Odyssey’s best bucket, only bringing an artifact that turned two other packmates from mundane to magical shifters.

Yet it turned the tide of battle.

They’d won. It should have been the best day of Ben’s life. It might have been if Ben hadn’t tugged Mavis’ sleeve and pointed out the Seelie fae hound across the street. I would have told him not to if I were there.

No, Ben. Don’t do it. Keep walking while you still can.

It didn’t work. Ben was in a hospital bed, not on that street. So it all happened again in his mind the same way.

Ben said it was sort of a dog. Mavis worried about the hound being out alone and that a frenemy named Donna was somehow in trouble.

Mavis crossed the street the same wrong way Ben would have. From between two parked cars, feet moving before thinking or looking because somebody was in need.

That’s what heroes do.

Heroes also push their girlfriends out of the way of speeding trucks, even when they’ll get hit instead. Ed always said he lived on borrowed time with his near-death experience and asthma. Ben knew that if he asked, Ed would say he’d let the reaper have him to save Mavis. The truck didn’t hit him for one small reason.

He leaped off the curb, pushed Ed out of the way, and fell forward. Exhaust and burned rubber assaulted his nose before he hit the pavement. Ben tried getting a leg under himself, the left one. He pushed and scraped his shoe on the asphalt. He almost made it.

Almost doesn’t count for much in the mundane realm.

I felt it with him. Pain screamed up his right leg. His left popped and snarled, dull in comparison. Both increased in volume like the cruelest music taking over. Ben fought to keep his eyes open, and they met Mavis’. Tears spilled from hers.

The last thing he did in the memory was try to smile. He wasn’t sure whether he managed it or not. Mavis sat on the pavement with Ed, both unscathed. He’d saved their lives, maybe given everything to do it because of what Ben was. A hero, too.

I had to introduce myself. Once I figured out how to make extrahumans see me, of course. That comes later. This is more Ben’s story than mine.

Keep reading, and he’ll tell it.

I can't wait to see how the rest of Ben's story unfolds as he begins school with a fresh set of challenges. Find out on November 16th how Ben fares when Messing Psychic Academy  Book 1: Make Yourself is released. Head over to Amazon and pre-order it today. 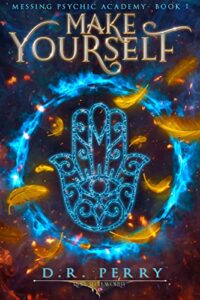