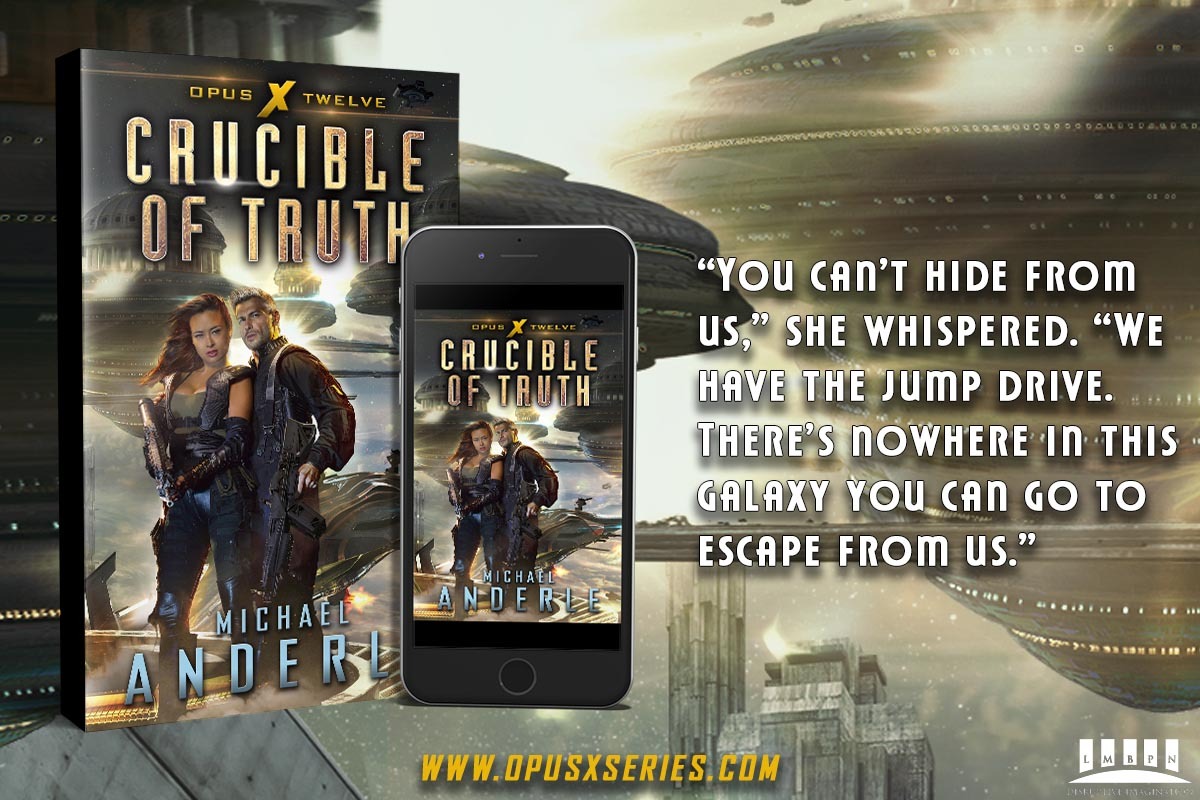 It turns out that even if you are immortal, you can still be blown up.

Commander Shen’s gaze flicked between the half-dozen data windows floating in front of him. Numbers ticked down as the destroyer hurtled through space toward the contact on the far edge of the sensor window.

They’d picked up a weak distress call. That hadn’t concerned him much, but what little they could pick up on the long-range comm should have made no sense.

They were far from the frontier, but the UTC had gone mad.

“I…under…attack…” the message repeated. He’d ordered the comm station to relay it directly to him and his first officer, Lieutenant Commander Albriz.

The tall woman sat in her chair, focused on different systems windows, including power and weapons. No one was expecting a battle when the Kano had been assigned to Wolf 359 a few months prior, but with chaos sweeping Earth after the attempt on the Prime Minister’s life, no one was surprised that they might face one.

“Clear up that signal,” Albriz barked. “Sensors, confirm secondary readings. We need to know what we’re dealing with.”

The sensor operator continued tapping his controls while he shouted his report. “Transponder codes indicate that it’s the Beidou, a Class II yacht registered to Julia Caldo.”

“She’s got all sorts of special privileges in the database.”

Albriz sucked in a breath. “What else? Any hostile contacts?”

“Unclear, ma’am. According to her listed flight plan, the Beidou should be part of a flotilla. If these readings are right, we’re picking up a lot of debris but only a single ship.”

“Enough debris to make up the other ships?”

Albriz looked at the commander. “Sir, there could be terrorist fighters hiding in that debris. The escort vessels might have taken the mothership with them.”

“Please!” screamed a woman’s voice over the crackling comm. “This is Julia Caldo. Everyone else is dead. I’m in a panic room, and I don’t know how long it will hold. Anyone who is out there. I’ll pay you anything. Please save me.”

Albriz gave Commander Shen a pleading look. He could understand her frustration. This wasn’t the frontier. People shouldn’t be picked off like sheep by rabid wolves.

He gave her a firm nod. “Call it. I’d rather overreact than get surprised.”

The lights on the bridge dimmed slightly, and holographic red warning panels appeared at the stations.

Albriz consulted a data window. “We’ve got several minutes until we enter maximum effective range and sixty seconds before our fighters can launch.”

Commander Shen scoffed. “Those idiots are either the bravest men in the galaxy or the dumbest if they think they can take on a destroyer with three fighters.”

“Please…” Julia whimpered over the comm, her voice distant and distorted by static. “I don’t understand who these people are. They kept ranting about their cause. I don’t understand. They didn’t have to kill everybody. If it was me they wanted, why not just take me?”

That confirmed it—terrorists, not pirates. Terrorists made more sense. The idea of pirates hitting a system like Wolf 359 seemed absurd, but it wasn’t all that many years ago there had been an insurrection there, so he couldn’t ignore the possibility.

Different people held different opinions about what constituted the core worlds and the frontier. A lot of people thought of the latter as the place where trouble happened, but trouble followed people, and where more people lived, there was more trouble. A massive terrorist force had infiltrated the largest city on Earth and nearly killed the Prime Minister. That was all the proof anyone needed that nowhere was safe.

True safety was an illusion. That was why the police, the Army, and the Fleet existed. The wolves circled in the distance, salivating and ready to pounce, and the shepherds needed to be ready. There might be nowhere safe, but dead terrorists couldn’t hurt people.

“This is Commander Shen of the UTS Kano to the three unknown ships currently on an intercept course. We have received a distress signal from the Beidou. You are not registered as part of their flotilla and are not sending recognizable transponder signals. You will immediately halt, depower, and prepare to be taken into custody. Refusal to abide by these orders will be considered hostile action, and you will be fired upon.” He waited a few seconds before looking at the comms officer, who shook his head. “Sensors, any escape pods?”

“No, sir.” The sensor operator’s voice quaked. “None detected.”

There were a lot of people fresh out of training among the crew this tour. Many of them had never seen combat or anything more significant than helping out with an evacuation when a ship lost power, but a man or woman couldn’t serve in the Fleet without expecting to see some death. He pitied them, but right now they needed to concentrate on the problem in front of them. Their training would carry them through.

Shen narrowed his eyes as four triangles with ID tags broke away from the Kano on the sensor display. A destroyer might be the smallest Fleet ship capable of carrying fighters and had small squadrons, but they were state of the art and flown by the best-trained pilots in the UTC. Whatever ragtag terrorist trash was flying the three approaching ships wouldn’t be able to handle them.

The idiots had let themselves get drunk on victory. Now it was time for a painful hangover.

“We need to get to that yacht,” Commander Shen commented. “Comms, have we lost the Beidou?”

The comms operator frowned. “We’ve still got signal, but nothing’s coming through, sir.”

“Still no response from approaching ships,” the comms operator noted.

“Those vultures had their chance to beg for mercy,” Commander Shen replied coldly. He nodded at Albriz. “Full engagement. We don’t have time to play with the bastards.”

The squadron broke into pairs of fighters and released two volleys of missiles in quick succession while moving to flank the enemy ships. The enemy fighters tried to charge right through. If they had defensive countermeasures, they didn’t use them.

The Fleet missiles converged on the fighters and exploded. A cloud of tiny contacts replaced the three unknown contacts, the debris of ships blown to pieces.

It barely qualified as a fight. It was closer to pest extermination.

“Establish a patrol perimeter, Alpha Squadron,” Albriz barked, a satisfied look on her face. “Helm, slow us up. We don’t want to blow right past the yacht.”

Despite the hard counter-burn that rattled the ship and strained the grav emitters, the destroyer zoomed past the engagement site and continued toward the Beidou. The forward camera feeds visually confirmed the remains of several ships forming a ghostly cloud of debris.

The Beidou had several hull breeches, including in the bridge, and spun end over end with no obvious sign of attitude control. That could have been from dead crew, damage to the ship, or both.

“We’re going to have to have our squad board from a cargo shuttle,” the commander concluded. “We don’t have time to try and straighten that out while people might be bleeding out onboard. And Caldo confirmed armed terrorists aboard.”

Albriz began to relay the order when a loud male voice came through from the Beidou.

“It is now the time of chaos. The time of rebirth. Our organization might perish today, but we have taken a powerful woman and her servants with us. You call us terrorists, but we are freedom fighters who will liberate humanity.”

Explosions ripped through the Beidou and blew the ship apart. Pieces hurled in every direction, slamming into the remaining pieces of other destroyed ships. A chain reaction had half the debris cloud expanding aggressively.

“Avoid the cloud, Helm,” Commander Shen ordered, glaring at the camera feed and the sensor display. He glanced at the sensor operation, who shook his head.

“No indication of escape pods, sir.”

“No emergency signals, no signals at all,” the comms operator offered quietly.

The commander stared at the tumbling debris, his mind soaking in the implications. He didn’t care much about politics, but given what was going on, that wasn’t a luxury he could afford. Julia Caldo was a famous, wealthy woman, and she’d just been murdered by terrorists in what was arguably a core system. Once the news got out, it’d add to the fear spreading across the UTC.

The whole chapter I'm shouting “don't help her”, then bam, what a twist! Opus X Book 12: Crucible of Truth is available for pre-order now, and the whole book will be available on February 5th, 2021. 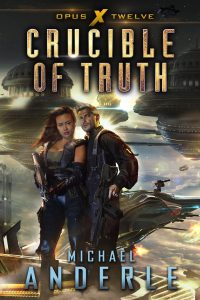