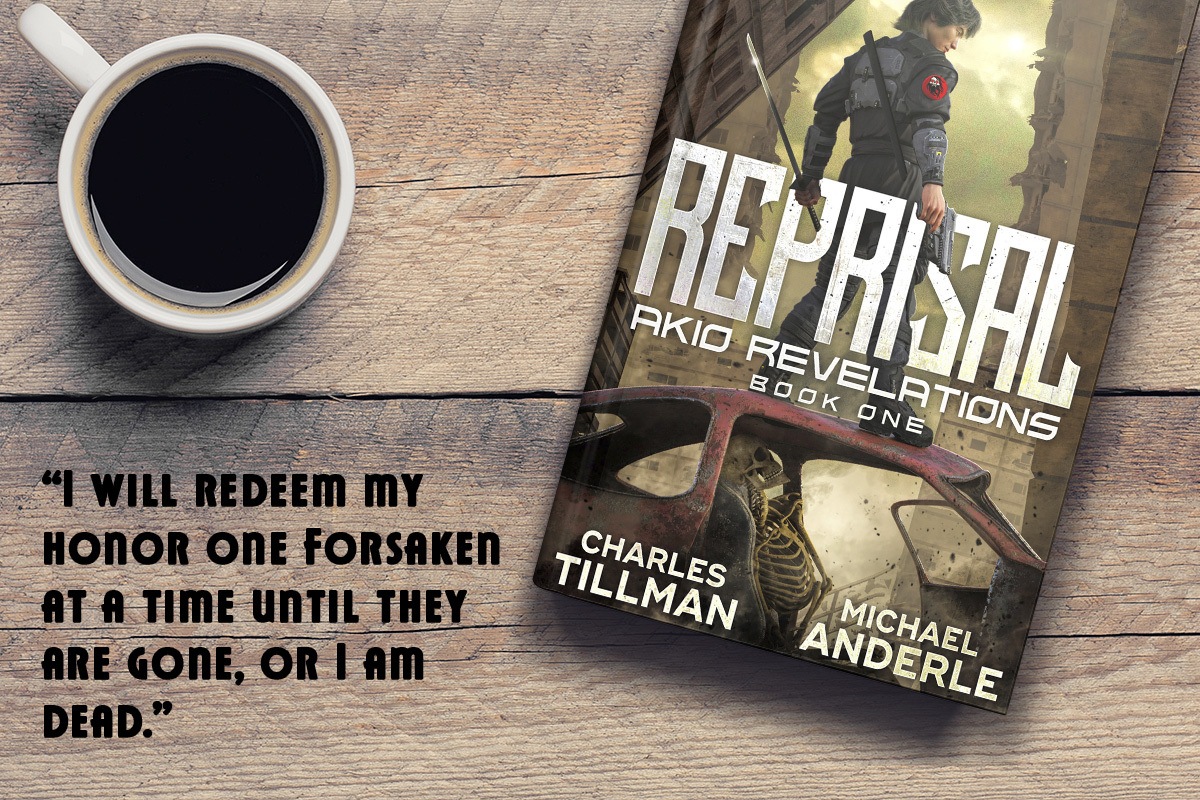 The Akio Revelations is the latest series within the original Kurtherian Gambit Universe! If you loved Akio in the original series, you won't want to miss this one!

“Togu-san, the pirates have taken over Uegusuku Castle as we were told. Our scouts have seen only twelve pirates inside, but they’ve barred the gates from within and have lookouts around the wall,” Akio reported to his friend and commander.

“How do you suggest we take them?” Togu shot back as soon as he finished the report.

Akio’s reply was equally quick. “I suggest waiting until just before dawn and taking a small group to slip over the wall and open the gates from inside, after eliminating all the sentries. They will be less alert. We have watched them for a few days, and they always change the guards after first light. The men appear to be lax before they’re relieved, I believe we can eliminate them without rousing the others. Then it is merely a matter of cleaning out the vermin.”

Togu’s lips turned up in a hint of a smile, proud of how confident and competent his student had come as a military leader since he had started his training. “Hai, that is a good plan. Select the men to accompany you and make it so.”

Akio bowed to his Sensei and turned as soon as he dismissed him to assemble the team.

“We go over the wall here,” he pointed to a crude drawing in the sand as the nine warriors he had selected looked on with interest.

“This guard gets lazy a few hours before daybreak and takes longer and longer between his patrols. He stays in this corner nearest the sea,” he pointed to the indicated spot, “for a half hour or more during the last three hours of his watch.”

“His lack of focus will be their undoing.” Ryu smiled.

“Hai, and you will be the instrument that sees that this is his last night on a boring duty,” Akio chuckled.

“He will never know I was there at all.”

“Hirotoshi, after Ryu silences the guard you and the twins make your way to the one on the land side of the keep. I will take Yoshi with me and we will deal with the one on the seaward side. When both are down, Niwa and Gao will take the two on the gate with their bows.” He turned to the two men and cautioned, “Be sure of your shots, because as soon as you loose your arrows, Ryu and I will open the gates. Then the real fun will begin.” His smile did not reach his eyes. Both men nodded.

“Move silent as the night, and we will finish these pirates and be back home in a week.”

All the warriors nodded their agreement as he dismissed them to prepare for the night’s events.

“Ryu, your man is headed to his corner again. He must have had a hard day because he started taking longer rests earlier than normal tonight. He was there almost an hour this last time. Give him ten minutes to get comfortable and we will move,” Akio murmured as they watched the guard’s head go below the edge of the wall.

“When the others reach the wall where that torch has nearly burned out, you make sure he doesn’t have to answer to his master for the lack of attention to duty.” Akio pointed out a darkened section under the wall where the failing torch was.

The warriors worked their way down to the base of the wall in silence.  They moved from shadow to shadow until all of them were gathered in the darkness.

Akio signaled, and three of them knelt with their heads facing the wall. Two more carefully climbed onto their backs. Akio and Hirotoshi climbed onto the top two and slowly stood. Ryu stepped between them and they lifted him effortlessly until he could grasp the top of the wall. He pulled himself up as they pushed him from below until he silently slipped over the top.

The waiting warriors heard a soft gasp from the top of the wall. After a brief time, a length of rope dropped to the ground. The remaining men climbed onto the dark section of the wall and seconds later, the guards on both sides died as silent shadows rose behind them and cut their throats without a sound.

“Ryu, let’s open the gates,” Akio called softly as the twin twangs of bow strings releasing came from the front of the castle.

The two warriors ran to the gates and strained as they silently lifted the heavy rough-hewn wooden beam from the brackets that held them closed. As the gates slid open, the rest of the warriors came through and moved into the castle like silent, deadly shadows.

Akio signaled for Ryu to follow as they made their way inside to the stairs that led to the upper levels. Stepping carefully to insure they didn’t alert the occupants, they slowly climbed to the second floor. This level contained several sleeping chambers. As Ryu moved to the door of one and Akio to another, a pirate stepped out into the hall.

“What? Who? Intruders!” he yelled right before Ryu’s blade took him in the throat. Although Ryu moved as soon as he saw the man, the damage was done as sounds of alarm echoed throughout the building.  The sound of running feet came from above and in seconds men started pouring down the stairs. Akio and Ryu dragged the pirate’s body into the room he came from before anyone could see. The sounds of battle soon came from below as the defenders descended to the first floor.

“Sounds as though our scouts may have missed a few.” Ryu deadpanned over the clash of swords and the screams of the injured and dying.

“Hai, it seems so,” Akio shrugged.

“Sounds like they’re having fun. Should we join them?” Ryu raised his eyebrows with a smile.

“After you,” Akio chuckled with a slight bow.

They made their way down to the first level and saw that the battle was not evenly matched. There were thirty pirates standing and only fifteen of their men. Akio and Ryu moved in behind the pirates who had come from the upper level and announced their presence by promptly running two of them through from behind.

Four pirates separated from the group and attacked them. Akio ducked a slash that narrowly missed his head while blocking a stab from the other foe. Ryu had it better because one of his attackers had misjudged his reach and was gagging on his own blood around the blade Ryu had put through his throat.

Akio shuffle-stepped to the right and darted back to stab one of his attackers in the chest. His blade stuck between two ribs and he had to let it go to dodge the other’s attempt to run him through. He snatched his tanto from his belt and hurled it at his assailant with deadly accuracy.   The sharp tip penetrated his eye and killed the pirate mid-stride. Akio slowed long enough to put his foot on the first man’s chest and wrench his katana free, spinning a half turn as it came loose and hamstringing Ryu’s attacker. He chided, “That’s four for me and two for you,” as he finished the screaming pirate with a downswing that left him missing the top of his head.

“You’re showing off now,” Ryu laughed as he blocked a slash from another and finished him on the backstroke. “Three to four.”

Akio grinned as the two of them waded into the fray with furious swings of their swords, each swing killing or wounding a pirate. In moments, it was over. Akio’s group had been reduced from twenty to twelve and the pirates were all dead or dying on the floor.

Akio wiped his blade on one of the fallen pirates and motioned for Ryu and Hirotoshi to follow him as he made his way toward the stairs to check the upper levels. A quick search of the second level found only the dead pirate who had sounded the initial alarm and nothing else.

As Akio stepped onto the third level, his body stumbled back into Ryu, an arrow sticking through his shoulder. Ryu caught him as Hirotoshi bounded forward and sliced the archer from waist to throat with a savage swing of his katana.

“Akio, hold on, we will get you to the healer.” Ryu’s voice was urgent as he looked at the wound, the blood pulsing out around the shaft in time to the beat of Akio’s heart.

“All is well, Ryu. We defeated the pirates. I can meet my ancestors with honor,” Akio groaned.

“Hai, only a flesh wound,” Akio mumbled weakly as everything faded to black.

As they reached the first floor, an overwhelming sense of fear hit them.  Ryu and Hirotoshi went to their knees, unable to stand under the onslaught. Akio’s unconscious body went down with them and lay unmoving. The other warriors were all down and barely registered when two men wearing all black with their faces covered by masks strode into the castle.

One man went to Akio’s prone form and lifted him as if he weighed nothing. He snapped the head from the arrow and jerked the shaft through the wound. Akio’s eyes shot open as the pain forced him back to consciousness.

Be sure to grab your copy via Pre-Order now as Reprisal goes live this Friday, June 26! 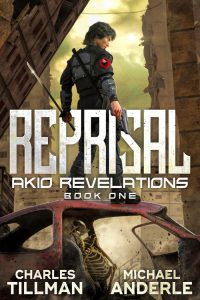