I won't say much, I think the title says it all! Plus, I know you are much more interested in the Snippet than what I have to say. LOL So, without further ado: 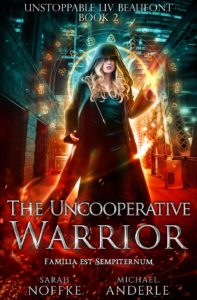 Snippet #1 from The Uncooperative Warrior

The sound of monks chanting in the distance reminded Adler where he was. It shouldn’t have been hard to remember, given the stone walls and ever-present musty smell in the hall, but he still felt disoriented each time he visited this location. Those were the wards, he reminded himself. The protections that had been placed on the monastery centuries before to guard that which it held.

Beside him the old monk hurried, the keys in his fingers clattering as he staggered forward, a lantern in his other hand. In the distance, a dripping sound made a pleasant drumming that accompanied the chanting.

“I don’t remember the last time I saw you,” the monk named Niall said, squinting into the dark.

“You wouldn’t,” Adler replied, careful to keep the bundle under his robes safe and unseen. The old monk’s memory had been wiped so many times that he was close to dementia. Still, in the recesses of the old man’s mind, he remembered Adler well enough to let him into the monastery each time. Niall alone knew the path they took through the catacombs under the ancient monastery. When he was close to passing, his knowledge would be passed onto another monk, as it had for centuries.

Adler had never liked entrusting something so important to a mortal, yet that was the safest way. The information wasn’t even safe in his mind, he believed. Some things were so important that the measures it took to protect them were worth these risks. He rested his hand on the canister under his robe. Stored magic was one of those things. In the wrong hands, it could be earth-shattering. What Adler feared most was that the magic he held now would open doors that had been shut long ago. It was better for everyone this way.

Bats dove from the arched ceiling as the two men strode through the next tunnel. A larger dark form streaked after the bats, startling Niall.

“What was that?” he asked, halting and holding up the lantern.

Adler urged him forward. “It was nothing. Only a shadow.”

The old monk didn’t look convinced as he inched forward, having to nearly be pushed to continue.

“I’m not sure what it is you do down here,” Niall stated. “There’s nothing here but endless hallways and entrances to the great spire.”

“It is none of your concern.” Adler grew restless with worry the longer they stayed down there. The monastery was protected from portal magic, which meant he was trapped if something happened. Not being able to use magic here was part of the protections, although the irony wasn’t lost on the old magician.

Niall halted abruptly, a shiver running over his ancient form. He pointed with the lantern. “The location you seek is just ahead.”

“S-s-sir,” Niall stuttered, his jaw suddenly chattering as if the chill in the air had frozen him to the core.

Adler spun around, impatience on his face. “Yes?”

“What is it that you keep down there?” The monk scratched his head, thinking hard. “For the life of me, I can’t seem to remember, although I know the way. Why is that?”

Adler let out a long breath. He should dismiss the old monk; there wasn’t time for chatter. However, Adler knew how the spell worked. It was sealed by the words he’d speak next. “You are the guide, and only to lead one of the Seven to this spot. It protects that which is most sacred, and it cannot be found by anyone but you.”

Niall’s eyes glazed over for a moment as if he’d suddenly fallen into a trance. Then he shook his head. “Yes, I remember now.” He waved his hand, the long, rusty keys clattering with the movement. “Please take your time. I’ll be here when you’re done.”

Adler spun around, not entirely sure where he was going. The hallway split up ahead. He halted at the intersection, where a round blue and green stone on the floor caught his attention. Turning back to where the monk stood, Adler squinted into the dark. Due to the lantern light, he could tell that Niall was resting against a nearby wall with his eyes closed.

Turning his attention back to the stone, Adler read the language that few knew that was inscribed under his feet. The words rolled off his tongue like the rush of water over rocks, soft and melodic.

Look toward the heavens. Climb high to reach the treasure.

Adler brought his gaze up, realizing at once that the great spire soared overhead, creating an abyss of black. On the walls closest to him, he spied small indentations on the stones—the path one would take if they dared climb to the top. Round and round, all the way to the locked vault at the highest peak of the monastery.

How many times had Adler looked up at this spire, feeling as though he was seeing it for the first time? He didn’t know. The wards of protection prevented him from remembering, and yet he knew what was held in the vault, even if he could never remember how to get there.

He withdrew the canister from inside his robe, the light blue substance inside glowing faintly in the mostly dark corridor. Magic never faded, but when not used, it did dull a bit—just like people and creatures.

For Adler, that didn’t explain why Olivia Beaufont’s magic was so strong after being unlocked. There was much about the girl that perplexed him. He still believed that she was the right choice for Warrior, although he hadn’t foreseen her nearly ruining everything. Instead of taking out the Zonks, she’d intervened, botching a plan that had been in the works for a long time.

Adler regarded the canister in his hands with great appreciation and sighed. He tried to remember that things had worked out for the best. If not for Olivia’s actions, Valentino’s double-crossing might not have been exposed until it was too late. Entrusting a rebellious magician to such a mission had been foolish. It was just that there were so few Adler could trust with such a task. Most would ask questions. Most wouldn’t understand. They might think that Adler was collecting and storing the magic for himself. They wouldn’t understand that he was cleaning up lost bits of magic. Keeping it safe. Going forward, he’d have to be more careful who he trusted for such things. He might just need to do it himself.

Alder raised his hand, and a small dragon the size of a falcon flew down from the shadows to perch on his glove.

Adler regarded Indikos with affection, catching the spark in his green eyes. He pulled a length of thin rope from his pocket and used it to tie the canister of magic to the dragon’s back. He realized at once that he must have done this many times since the act came so naturally, like riding a bike or playing the piano.

Indikos stayed still as the canister was tied into place. After Adler ensured it was tight enough, he lifted his arm into the air and the dragon soared upward, flapping his orange wings until he was swallowed by the darkness. When he returned, the canister of magic would be gone, kept out of the hands of those who must never hold it ever again.

The Uncooperative Warrior will be live on Friday, February 15th! But it is available now for Pre-order

Come back to the blog on Thursday for the next chapter in the Uncooperative Warrior!