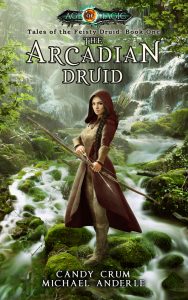 The Arcadian Druid, Tales of the Feisty Druid Book One

By Candy Crum and Michael Anderle

To be continued… Keep checking in to the Age of Magic and Kurtherian Gambit fan pages for more updates on snippets!

The book releases soon, so you won't have to wait too much longer. Tuesday July 18th!

To check out Candy Crum and her other books http://www.candycrumbooks.com