It's The Final Shattered Truth Snippet!

Tomorrow Shattered Truth launches and today you are getting the final sneak peek before the book goes live! I can't believe the day is almost here, it's about time!

Erik frowned. The weight of the rifle was all wrong—too heavy. An unwieldy weapon wouldn’t be good for field use, especially in a forest on a planet with two suns. It was the small details that kept reminding him he wasn’t actually on a frontier world, but instead in a holographic simulation supplemented by a quick-adjusting nanite-infused room that could provide at least a decent approximation of physicality and texture to back up the holographic illusions.

He preferred this kind of training to pure VR. His brain would never let him accept a lie beamed directly to his eyes. He would have to talk to them about a different rifle. He didn’t need a fake TR-7, but he wanted something that at least weighed what he expected, based on the appearance of the rifle.

Erik knelt behind a tree and waited. He had spotted the glint from a patrol in the distance a few minutes prior. He took shallow, quiet breaths, waiting. Patience won as many battles as bravery.

Branches crunched under boots in the distance. The targets were near. Two men emerged from the trees, not talking as they looked around.

Erik popped out from behind his cover and took two quick shots before the men even turned his way. They both fell without a scream or any sound at all except for a rustle of leaves and the crack of branches near the ground. He couldn’t claim that was completely unrealistic. Not every man survived long enough in a fight to let off a final scream or grunt, but he assumed Pacific Tactical Center kept the blood and screaming to a minimum for reasons other than realism concerns.

It didn’t matter. Right now, PTC was his only decent choice for keeping his edge.

The police had similar systems. However, since Erik was a detective and not a TPST member, they’d turned down his request to use them.

“Please consider joining the Tactical Police Specialist Team if you feel your talents lie in that area,” they told him. “But these aren’t toys for detectives to live out fantasies.”

Erik scoffed. Fantasies? He’d spent decades as a soldier. He understood fighting and killing dangerous enemies. In contrast, the average Earth customer probably wanted a heart-racing experience, not an actual depiction of war.

Jia might have been unusually naïve, but Erik’s time back on humanity’s home continued to prove that even people who knew better still wanted to look the other way and convince themselves Earth’s perfection was something other than mere propaganda fueled by the corporations who controlled the UTC in reality.

If enough people spouted the lie, it didn’t matter if it was true. It became true in a sick way. Was this how large swaths of humanity were controlled? Did it matter if the end result was a civil society?

It beat having to incarcerate tens of thousands of people who just accepted the false reality and didn’t push at the boundaries. At this point, he couldn’t come up with a good reason NOT to do it.

So, are you as excited as I am about tomorrow? More so? Then check out the pre-order link for Shattered Truth and get in on the action the moment it's released! 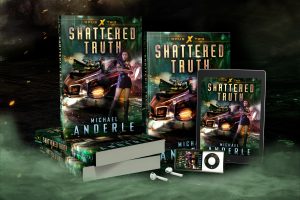