So Many New Books Here: Week in Review 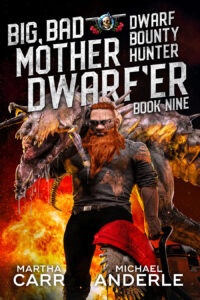 No teenage shifter girl. No borgs. No coonhounds. No cases. Do you know what that means?

Vacation for Johnny and Lisa!

Things are going great until Johnny gets a call from the last person he wants to talk to – his cousin Charlie Walker. A lot of things have changed, and Charlie has some surprising updates for Johnny.…and then there’s a case he dumps on them. Johnny should have known a break from everything was too good to be true 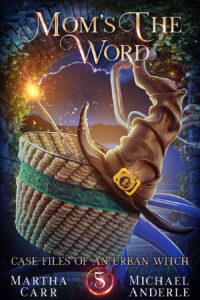 Magical medieval artifacts are on display at the Los Angeles County Museum of Art. They are the perfect target for magical thieves. Look out Lucy Heron. It’s not the usual menace looking to steal a strange magical crown.

Good thing Lucy and the Silver Griffins are on the case.

Meanwhile, the Underfoot Brigade are on a case of their own. Monsters are in the underground tunnels. Time to find out why. The answers to both problems are hidden in plain sight. Can they look to the past to solve the riddle of the present? Good thing the Heron family is good at researching history – including their own. 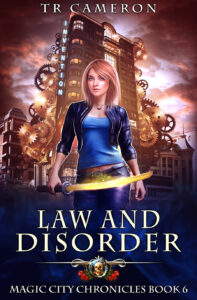 With threats pressing her from every side, can Ruby fulfill her destiny? It’s time for Ruby Achera to complete the quest and become the Mist Elves’ new Mirra – or die trying.

Meanwhile, the anti-human sentiment is coming out into the open. Julianna Sloane is plotting to bring not just one casino, but all of them, under her control. Overshadowing it all is the Paranormal Defense Agency. They’ve decided the trio of costumed protectors of the city are numbers one, two, and three on their hit list.

Who will stand by Ruby’s side and protect her city? The answers may surprise you. 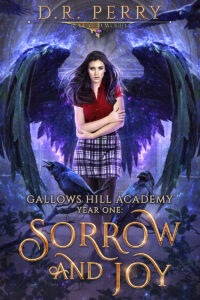 I'm Mavis Merlini and I want out. Of my shady family, this rowdy school, maybe even the world.

My brother got kicked out of Gallows Hill School for inciting mermaid violence. I'm determined to cut out all distractions and be the first of my six siblings to actually graduate. Which means living on campus and ignoring my extroverted roommate.

All my plans are doomed to failure when a goth lion shifter in a trench coat drops his feather. Of course I pick it up. It's shiny and I'm a raven shifter. I swear I meant to give it back. But now it's magically bonded to me and I can't. Now I've got obligations to a Faerie Monarch on top of everything else. And if I shirk them, I'll spend a hundred years in his dungeon. 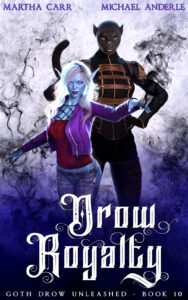 Cheyenne is at the crossroads. Who will sit on the Drow throne?

The blight is still ravaging Ambar’ogúl and spilling through the Border portals into Earth. It’s hard enough to discover the secrets in her father’s world that will force the Crown to step down.

Now Cheyenne has to battle the darkness on both sides of the Border and keep her old life running like normal.

With a traitor in the FRoE and war machines tearing through Virginia, who can the halfling trust? Who will get a chance for redemption? 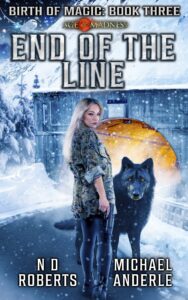 End of The Line:

WWDE+235 – The time is coming for the Defense Force to leave Earth forever.

The effort to reconnect the world has been successful, and a new home for the Defense Force chosen. All that remains is to tackle the Madness. Sarah Jennifer is still hurting from Ezekiel’s departure. Meanwhile, Ezekiel has his own losses to contend with. A chance encounter in the woods gives him the push he needs to make things right.

With her duty to Earth almost complete, Sarah Jennifer prepares to leave Arcadia in the hands of Ezekiel and Adrien. However, there’s an extra Were in her company, and she must make the decision as to his place in her life…

Can Sarah Jennifer move past the pain of loss and allow love into her heart? 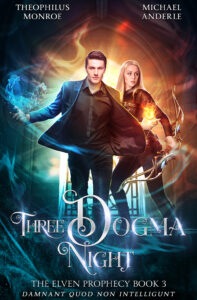 Two elf princesses at the same time… For most guys, an adolescent dream come true. For me? A total nightmare!

Another race of elf has showed up… the Drow… Exotic. Wise. And, sexy as hell!  The Drow have their own version of the elven prophecy. They think the chosen one is destined to marry their princess! Layla is pissed. But we received word that the elven legion has defeated the giants. Next on their agenda? Conquer earth. And if that wasn’t enough… an elf assassin is on my trail.

We need the Drows’ help. Without them, I won’t be any match for the elven legion is preparing to unleash on our world. If I can even survive long enough before they invade. 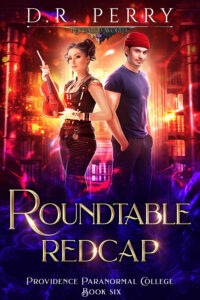 What does Fred Redford have to lose? Everything.

After the craziest semester ever spent at a magical college, Fred cuts loose just for one night. Everyone’s worried when he passes out and loses his cap. They should be. A Redcap without one is a ticking time bomb of destruction.

Irina Kazynski chose music over magic, leaving Rhode Island as soon as she turned eighteen. She’d rather be live-streaming electric violin performances and forgetting she’s psychic, but when the Sidhe Queen abducts Fred’s kid brother, she just has to help. 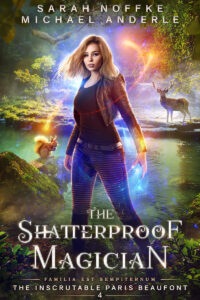 Love is on the rise, but not everyone is happy about it. Some stand to gain when hate reigns.

The fairy godmothers are challenged in new ways when social media breaks up lovers all over the world. To overcome this new challenge, Happily Ever After College is going to have to do something drastic…

They will need to evolve. And fast. Getting rid of outdated curriculum and traditional thinking to progress into the modern world won’t be easy. However, if true love is to be saved, then a new evil must be discovered and erased. Can Paris Beaufont save love and hopefully find some herself?