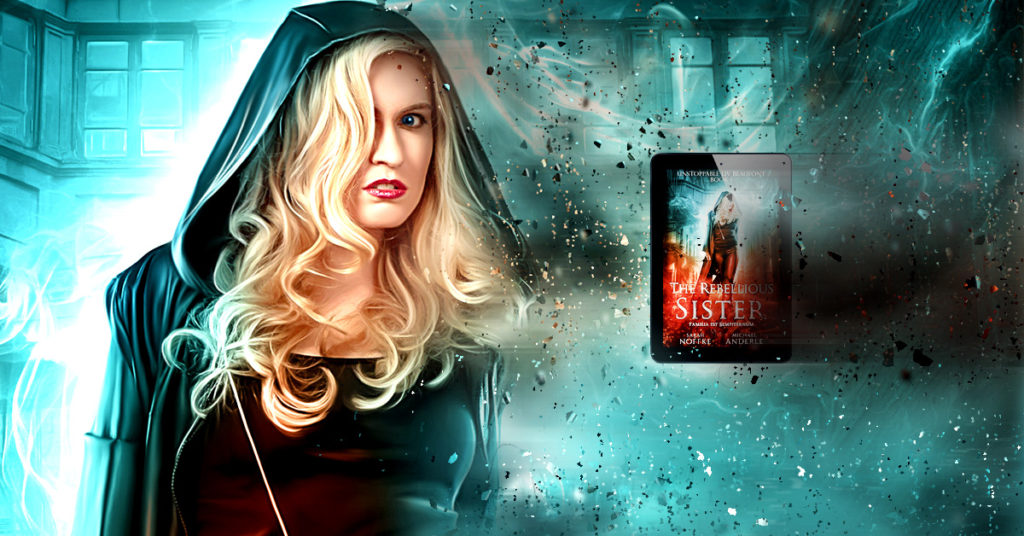 Have you missed the snippet time as much as I have? I spoke with Michael Anderle and Sarah Noffke this week and they agreed to share 2 snippets of their upcoming Urban Fantasy book, The Rebellious Sister!

I've read the first 2 chapters of this book, which is book 1 in the Unstoppable Liv Beaufont series! All I can say is hold on to your eReaders and prepare for a ride that you won't want to get off of. I can't wait for this book to go live on February 1, 2019. I'll be downloading it the moment it's available and I'm turning off my phone to read this thrill-ride of a book!

Today, I'm sharing the entire first chapter of the book with you. Come back in a few days so you can get chapter 2. And, if you want to be notified when this book goes live, scroll to the bottom to sign up for a notification.

In every man’s life, there is that rare and distinct moment when they doubt their loyalties. Ian Beaufont was living in that moment, an internal battle waging itself on his insides. He was much closer to finding out the truth, yet the closer he got, the more he felt like an avalanche was about to engulf him.

At the threshold to the cottage he shared with his sister, Ian checked over his shoulder. The Pacific Ocean crashed against the shore on the other side of the house. The night had swallowed the cottage, making it blend into the dark sky and hillside. Maybe if he wasn’t so tired, he’d venture down the stairs and stroll along the beach later that night. The gentle beating of the ocean on the sand always put him at ease, which was why he and Reese had chosen this place away from headquarters. No one knew they had it, and it would stay that way for as long as they needed to uncover the truth.

Ian held up his hand in front of the seemingly ordinary deadbolt on the cottage door. Touching nothing, he twirled his hand a half inch to the right, two inches to the left and then reversed in a full circle as if he were unlocking a safe, muttering an incantation as he did. A moment later the door creaked opened, granting him admission to his home.

Before Ian was even over the threshold, he began pulling off his scarf and long traveling jacket. The winds were mild that night in Southern California, but they’d been punishing an hour ago in London.

“Reese, I’m home,” Ian called, squinting in the dark for a place to lay his jacket. It felt like ages since he’d been home, but maybe that was because he’d missed it so much. This was the only place where he knew what was going on.

Ian directed his hand to the chandelier that hung over the great table in the middle of the room, but strangely, nothing happened. It wasn’t like he had to worry that a bulb was burned out. Those things never mattered for magicians.

“Reese?” Ian called again to the quiet house. “What’s going on with the lights?”

He peered at the chandelier, catching the ambient light that traveled through the bank of windows that faced the ocean, then spotted the open bottle of red wine on the table. He lifted it, surprised by how light it was. He didn’t have to read the label to know it was a bottle of Opus One, Reese’s favorite.

Ian sighed. “You got started without me? I thought we said no drinking until after we debriefed?”

No answer came from the back bedrooms like he’d expected.

She’d probably drunk herself to sleep, and he couldn’t blame her. It was hard for Reese to stay behind while he was off on missions, but that was her role as councilor.

Ian brought the half-empty bottle to his nose and sniffed, welcoming the aroma of dark fruit and spice. Those familiar scents hit him at once, but there was something else—a subtle note of oleander. One wouldn’t even have noticed it if one wasn’t acquainted with the poison.

Ian dropped the bottle, his heart suddenly racing. He didn’t even look back as it toppled to the table and rolled onto the floor, spilling its contents over the polished tile.

He burst into the back bedroom, wishing a damn light worked somewhere. Every attempt he made to ignite one was futile. When he pushed the door open to Reese’s bedroom, he froze. His heart tightened in his chest, his resolve nearly breaking. His sister looked like a statue that had fallen over, collapsed elegantly on the hearth in front of her fireplace. The coals were still red but slowly dying.

Ian rushed to her, pressing his hands to her neck, but he was unsurprised to find no pulse. She’d drunk half the bottle. There was no recovering from that much poison. There was no magic he could do to save his sister. She was gone forever.

Behind him, the door creaked. Ian stiffened. He wasn’t alone. He’d felt it all night, but only now realized the sinister implications. Ian had defeated leagues of enemies. He had singlehandedly brought down a sea monster the size of a battlecruiser. He was the strongest warrior the House of Seven had raised in centuries. However, if someone had gotten this far then he knew his options were limited.

It was hard to make out the figure in the doorway but the familiar shape of the man’s eyes and rattling of his breath gave him away.

“This was you? How did you find us?” he asked, his doubts falling away to allow the picture he’d been trying to construct for quite some time to form.

“Ian, you can’t hide anything from me. I know you’ve gotten too close. You’ve forgotten your place,” the man said, his voice a raspy whisper that seemed to travel great distances to reach his ears.

Ian’s fingers twitched by his side, but without making more than the slightest movement, he knew something was wrong with his magic. Somehow it had been disabled. Only one organization was powerful enough to disrupt a magician’s magic like this. Ian had no time to deal with the disappointment. He’d been right to follow the leads, but it had also been dangerous, as he and Reese had known. For her, it had been deadly.

Ian sprang forward, picking up the side table next to the hearth and throwing it in the direction of the other magician. The table crashed against the doorframe where the man had been; he had disappeared and reappeared a few feet away. From that distance, Ian could see his face more clearly: the ancient wrinkles and the eyes he’d always mistaken as kind.

“You can’t get away with this,” Ian said, scanning the room for options. Without magic, he was…normal, and his options were few. He hadn’t believed this day would come. Ironically it had, and against the one man he never thought would be his adversary.

“We already have, poor Ian,” the man said. “You should have left things alone.”

Ian felt behind him for the fireplace poker, but when he had it in his hand, the would-be weapon flew from his fingers, landing on the far side of the room.

The man shook his head. “You know I think of you as a son.”

Ian grimaced, pain in his heart making it hard to breathe. He pointed at his dead sister. “And was she like your daughter?”

The magician’s face remained indifferent. “I didn’t like killing her, nor will I like doing the same to you. But I promise, just like with your sister, I’ll make it as painless as I can.”

The magician raised his withered hand and instantly Ian felt the constriction in his throat. His feet rose off the ground and he kicked, trying to fight but sadly knowing it was useless. All his life, he’d felt the magic flowing in his blood, and, in the moments before his death, he felt its absence. What had ended his sister and would soon be his own demise was magic so powerful and encompassing that there was no way to fight it. He closed his eyes as his breath ran out, his vision turning black as he was lowered gently to the ground.

The old magician was careful to lay Ian beside his sister, making them look like they’d just fallen asleep on an awkward place on the floor. He had thought so fondly of the two. Had expected great things of them. But their loyalties, in the end, had been misplaced. They had put everything in danger, and so there had been no choice but to end them.

From the pocket of his blue silk robes, the magician pulled a single red flake the size and color of a rose petal. He let it fall from his fingertips and it caught a draft and drifted down, landing gently on the floor beside the bodies.

“What’s done is done,” the magician said, and strode for the unlocked door. When he was safely across the front step and back into the salty air, he spoke a single incantation and the small cottage erupted into violent flames that would burn everything inside.

So, what did you think? Are you as excited as I am for this newest addition to the LMBPN publications?

If you want to be notified when this book, or others in this series, goes live, sign up here below. You will ONLY receive notices regarding the Unstoppable Live Beaufont series releases.